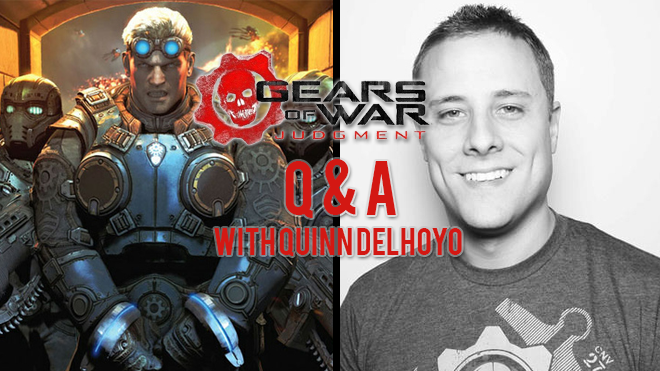 Amongst the hectic shuffle that was PAX 2012, I got a chance to speak to Gears of War: Judgment multiplayer designer Quinn DelHoyo from Epic Games about some of the exciting new changes making their way into the Gears franchise with this latest installment.

On the PAX floor, the Gears team had set up the recently revealed Free-for-All game mode, a first for the Gears franchise. After getting some hands-on time with it and having an absolute blast on two gorgeous FFA maps, Gondola and Library, I had to ask, why only introduce FFA, a staple FPS game mode, to the Gears franchise now?

“Classically, Gears has always been a team-based game and we always liked that aspect of it – that it was heavily reliant on teamplay,” answered DelHoyo. “You kind of get tied to doing certain things when your dealing with a trilogy, like certain ideals and you want to stay true to that. But, when Gears 3 was over and we wanted to do something new with Gears Judgment, we were like, hey, let’s pop the hood off this baby and let’s really dig down deep and look at what can we do to make it cooler – what can we do to provide something that the fans would want.

“So Free-for-All is something that fans have always asked for and with Judgment being a totally different game, we said alright, let’s do it. Let’s make some maps that can work for free-for-all, let’s allow people to not have to worry about finding teams to go up against and they just go in all by themselves and shoot fools.”

Feel free to check out some Gears of War: Judgment FFA footage right here on the two same maps that were shown off at PAX.

Bringing with it a completely different feel to the Gears franchise, it was clear that a game mode like FFA demanded certain tweaks to the gameplay in order to for it to keep up with the fast-paced action. I asked DelHoyo what were some of the biggest challenges in working with a brand new, and very different game mode like FFA.

“When [Gears Judgment] was coming along, Free-for-All was something we weren’t used to and the old control scheme, for an example, where you had to use the d-pad to switch [weapons], it was just slow, it was clunky and mistake prone. Our game is fast, this game is fast and we wanted a control scheme that was just as fast and as mean. That’s where we just slimmed it down to two weapons, put it on the ‘Y’ button and you can quickly cycle between them really fast. And then, what about grenades? Well, why not just have off-hand grenades? Put that on the left bumper, let people throw those quickly and get into engagements and battles quicker. Those were definitely the biggest tweaks in the game – the control scheme.”

The modernization of the Gears control scheme definitely lends to a more accessible experience, but “that wasn’t necessarily the design intention,” explains DelHoyo. “It was just basically to improve gameplay and allow people to move and shoot at the same time. It does definitely help to have the reticle on-screen at all times. That’s one of the big changes – to allow people to move and shoot accurately. And the control scheme is very much what you’d find with other shooters – you know, ‘Y’ button switches between [weapons], on a console, you have two weapons. Off-hand grenades is very common. So that definitely helps for accessibility.”

So far, this marks two brand new game modes making their way to the Gears franchise if you include the previously announced Overrun mode. I asked if we could expect any additional game mode announcements in the future. While he couldn’t get into specifics, DelHoyo assured me that we “absolutely” can look forward to some extra goodies.

Quickly touching on the ranking system, DelHoyo mentioned, “were looking at everything, we’re opening up the hood, no stone will be un-turned, but that’s something we’re not going to be revealing or talking about right now.”

Make sure to stay tuned to MP1st for the latest of everything Gears!

Halo 4 – A Look at the Promethean Weapons and Class Types