What better way to start Call of Duty Season than with drum magazine full of Double XP. Another bout of the good stuff is incoming next week for not only those enjoying Call of Duty: Black Ops 2, but also last year’s Call of Duty: Modern Warfare 3.

Announced via an in-game Black Ops 2 message, Infinity Ward is celebrate the upcoming release of Call of Duty: Ghosts this November 5 by giving both Black Ops 2 and Modern Warfare 3 players a whole week of double XP. It starts this Friday, October 25 at 10am PDT and goes through to next Friday, November 1 at 10am PDT. This may be your last chance to earn double the amount of XP in both games, so be sure to get some time in while you can. 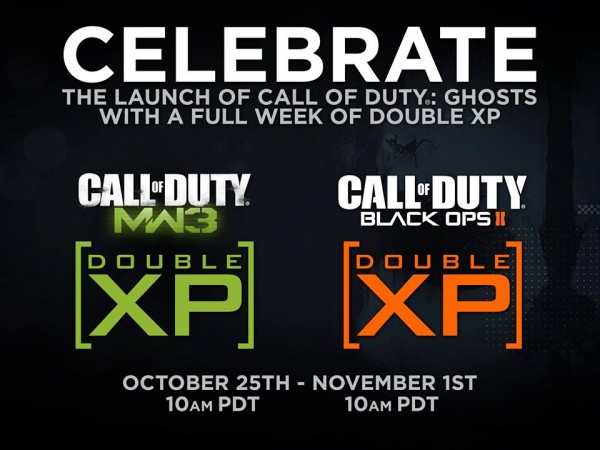 If you do miss out, however, you will still have some goodies awaiting when you get your hands on Ghosts later next month.

The message also indicates that anyone who has played either BO2 or MW3 will receive a total of six new unlocks for Ghosts, ranging from playercards to backgrounds, when they pop the game in for the first time.