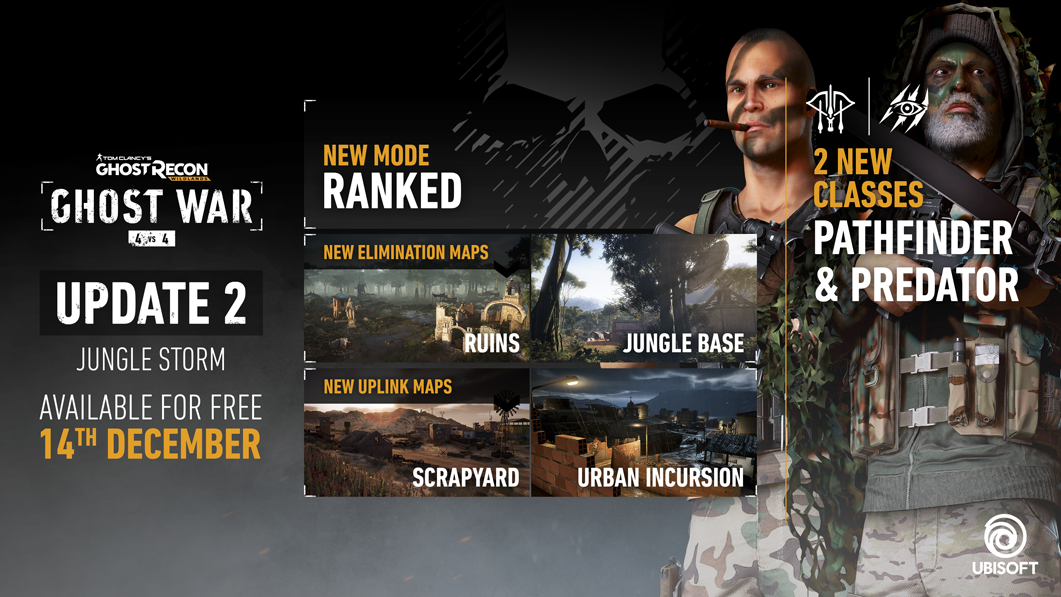 We reported yesterday that the Predator (yes, the one from the movies!) will be making his way to Ghost Recon Wildlands. Well, he’s out and terrorizing people now! Called “Jungle Storm,” this update adds a ton of new stuff into the third-person shooter, and best of all, they’re all free!

At a heft 12GB on consoles, there’s new classes, a new “ranked mode” and of course, gameplay adjustments too. Check out the patch notes below for this Ghost Recon Wildlands update.

Ranked Mode is now available in Ghost War! It is unlocked at level 15 and will challenge you to climb the ranks from Bronze to Elite. You can read everything you need to know about this new ranked mode in our FAQ article.

A new Marksman class has been added, called Pathfinder. Equipped with a crossbow, his light step does not trigger mines, he cannot be detected by Scout’s Drone motion sensor, marked by drones or the Sentinel’s Satcom Tracker. Season Pass and Ghost War Pass owners will have immediate access to the class, while the other players will be able to purchase the Pathfinder with 4000 Prestige Credits after a week, in the usual skill trees. The class can also be unlocked in the in game store against Credits.

A new Assault class has been added to the game. The Predator is a reliable and versatile frontline fighter, equipped with either an M16 rifle or the MG121 LMG. His Battle Rage ability grants him all the Adrenaline bonuses for a short time: increased health and regeneration, suppression immunity and faster revive. Season Pass and Ghost War Pass owners will have immediate access to the class, while the other players will be able to purchase the Predator with 4000 Prestige Credits after a week, in the usual skill trees. The class can also be unlocked in the in game store against Credits.

A small Bolivian village supported by open fields and a central massive communication center. Jungle Base is an urban environment with surrounding foliage for flanking, and elevated areas perfect for snipers. Between the buildings and bushes there are plenty of places to hide, so make sure your team is watching your back!

Located in the forest valley, Ruins is surrounded by trees. The middle of the map has spacious areas between buildings. Be mindful of a sniper’s gaze or an assassin’s sneaky attack.

A Santa Blanca hideout used to store and move cocaine to a nearby airfield, Scrapyard is a sparse, urban style environment. The middle of the map is full of right corners, so be prepared for some close combat!

A Bolivian town on the slopes of Inca Camina, this map is a moderate density urban environment for players to enjoy urban warfare. This map offers a bit of a different style and pacing from the normal Ghost War match.

Three customization presets are now available to use with each class. Every customization done on a preset slot will be instantly saved. With the addition of the presets, the full customization is only available outside a match to speed up the player ready process.

We have also added a Costumes option to character customization and 5 class packs — Tech, Sentinel, Medic, Assassin, and Enforcer.

We have added a page in game in which you can view all of your stats. Weapon stats have also been added to the Gunsmith page.

We reworked our penalty system for quitting a match while it’s still ongoing. We added strikes-outs, temporary ban penalties and warning popup to make sure the player is conscious of the sanction. The ban are going from 10 minutes to 4 hours at most and the strikes are disappearing after a 2 hours long probation without a new quit. Also, keep in mind that if you leave a match before the end, you will still receive a defeat but no victory, depending on your squad result. For more information about this system, please read our Ranked mode FAQ.

– Added a new Marksman class, the Pathfinder: equipped with a crossbow, his light step does not trigger mines and he cannot be marked by drones or Satcom trackers. This class will be exclusive to Ghost War Pass holders for 1 week.

– Redesigned Tech class to increase its effectiveness: deployed jammer now destroys launched drones and prevents further deployment for 15 seconds across all the map

– Farm Town: complete rebalance of the map, changing the bounds, spawn points and fixing an exploit

– Dust Town: rebuilt the bounds of the map to ensure no desertion occurs while still safely away from the boundary

– Mountain Village: removed access to the cliff face south of the town

– Sub Factory: patched up a hole in the world

– Warehouse: the map was slightly reworked and some navigation issues were fixed

– New weapons added from the Fallen Ghosts expansion for the Assassin, Tank, Sentinel, and Scout.

– Reduced all pistols damage by 15%

– Reduced all weapons penetration values (except for Sniper’s primary weapons)

– Increased the damage of the Assassin’s Vector by 10%

– Changed C4 to behave more like a trap than a high powered grenade: reduced throw range to half and can now be only be detonated when placed

– Improvements to Quit penalty system: We reworked the penalty system to make it clearer and more transparent. The system is more lenient in Quickplay than it is in Ranked.

– Improved ping placement and added out of screen feedback

– Removed ability to customize character between rounds to speed up class selection and ready process; only preset selection made possible

– Added new Bowman announcements for win and loss round objectives

– Added ability to start a Custom Game with one player

– HUD settings should no longer reset on each update

– There’s a new threat facing Bolivia. The Predator has come in search of new trophies. Take on this newest Legend and reap the rewards. If you want to know more, you can watch the replay of the special livestream we had on this event.

– Added missing information about what bonuses have unlocked after booster activation

Whew! Told you this was a big one. Let us know what you make of the new content so far in the comments below.