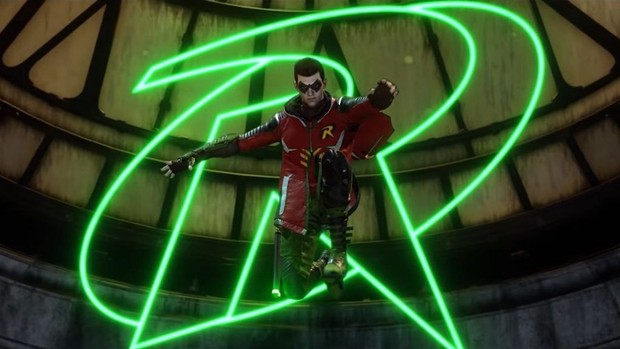 As one of the first panels held during last weekend’s highly successful DC FanDome virtual event, “Gotham Knights” was WB Games Montreal’s reveal as their long awaited follow-up to their critically acclaimed “Batman: Arkham Origins” — only this time you play as one of The Dark Knight’s sidekicks in Nightwing, Red Hood, Robin, and Batgirl. With Bruce Wayne and his alter ego apparently dead, players will now have the chance to play as his proteges in a new story that has been confirmed to be unrelated to Batman Arkham universe.

One of the first questions that popped up in fans minds was the identity of Robin in the game. As several crime fighters took on the name including Bruce Wayne’s own biological son Damian, it was finally confirmed post-DC FanDome that Tim Drake was the Robin featured in the game. The costume and design was an amalgamation of Tim and Damian, but ultimately it was Drake who came out on top. Speaking to Comic Book.com, Gotham Knights Creative Director  Patrick Redding revealed why it had to be Tim behind the red and green costume:

“So Tim Drake was our Robin choice right from the start and for reasons that I’m not going to get it to yet, because it does tie into the broader arc of the story, and we will talk about that a little later,” Redding said. “Tim was the right Robin to be the newest Robin for where we’re at, and as well for us, it allowed us to have a teenage Robin who was nevertheless still a physically formidable and physically credible fighter. Even though he has more of a stealth focus and a bit more of a focus in terms of how he’s using his gadgets and using the tricks and detective intuition that he has, we still wanted a Robin that could credibly go through a full evolutionary arc that would end with him being the new Dark Knight of Gotham City.”

“So that for us made a lot of sense, and it’s great because if you’re familiar with the lore and you know your way around the various stories about Tim Drake, it’s not like completely unexplored territory,” Redding said. “People have asked the question of, ‘Where’s Tim going? What’s he turning into?’ People sense that he might be a better detective than Bruce Wayne on some level, but he also has some of Bruce’s other core idiosyncrasies as well and what is that going to evolve into? So for us, it’s really fun, narratively and in terms of his progression. He’s a character who I love thinking about because what kind of urban legend does Tim Drake create about himself when he is on the path to Knighthood?”

For more Gotham Knights action and gameplay, check out our post on the gameplay footage released by DC. The game is slated for a 2021 release window for the PS4, PS5, Xbox One, Xbox Series X, and PC.