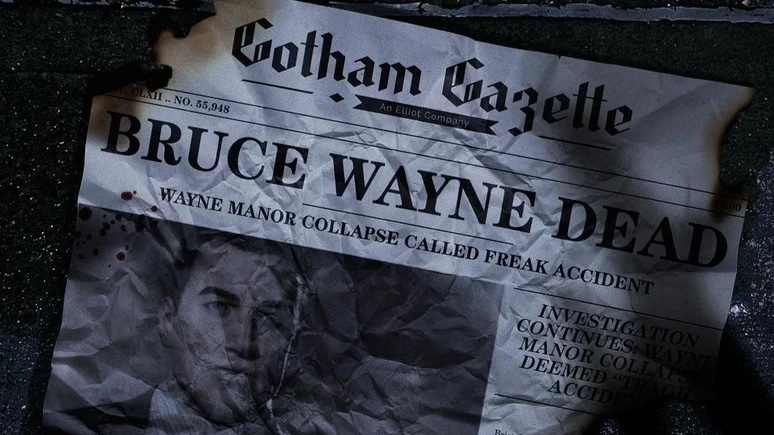 DC Fandome is debuting in less than two weeks, and Warner Bros. Games Interactive has started to send out Gotham Knights media kits to the press ahead of DC’s biggest event. The media kit has sparked a ton of speculation online, with some key pieces of information leaking out with regards to the incoming villains for this next title from WB Games Montreal.

Several influencers from Twitter shared the Gotham Knights media kits, and they show some very interesting tidbits for the game. Check some of them out below:

Got a mysterious package today. I wonder what’s in the box 🤔👀…

The media kit includes a newspaper with the headline reading, “BRUCE WAYNE DEAD,” a key piece of information given that Gotham Knights will be set at a time when the Dark Crusader has seemingly passed away alongside Commisioner Jim Gordon. Alongside the newspaper is an invitation to a Masquerade Ball, one which celebrates the life of Bruce Wayne. The last item inside the box is a mask, and avid comic book readers and DC enthusiasts will recognize this from the Court of Owls, the rogue group who is confirmed to be one of the antagonists of Gotham Knights.

New teases at characters? (more in comments) from GothamKnights

Here’s the text in the newspaper clipping (via Reddit user throwaway28012801):

JOBS -PRIVATE SECURITY – PRIVATE ENTREPRENEUR – Wealthy(?) entrepreneur seeking able-bodied security (?). Must be willing to work nights, weekends and holidays. Must have no aversion to flightless birds and prefer the cold. Negotiable salary, (?) benefits.

ENGINEERING INTERN – WAYNE ENTERPRISES – Seeking young bright minds pursuing real world experience at one of the most cutting edge companies in the world. Interested parties inquire directly at Wayne Enterprises HQ between the hours of 8AM and 5PM Monday-Friday.

PERSONAL ASSISTANT – FALCONE ENTERPRISES – Looking for a business-minded go-getter who is highly discrete(?), professional and most of all, loyal.

SEEKING SEVICES -LOOKING FOR VOLUNTEERS – SK(?) ANIMAL SHELTER – In search of passionate animal lovers who want to fight for the underdog (pun intended). REQUIREMENTS: Love for ALL animals (especially cats), Willing to take payment in cash OR goods, Can look the other way

TIRED OF OLD TECH? – Group of rebels looking for (?) individuals who love tech and ((want to(?)) shake up Gotham City. (?) (?) a must, flavor for rebellion required and distate(?) for authority encouraged.

(all possible spelling errors my own)

As noted in the thread, references to Penguin, the Falcone crime family, Catwoman (Selina Kyle), Anarky, Poison Ivy, Hush (Thomas Elliot, and Lucius Fox were prominent in the clipping. That said, even if this newspaper made mentions to their characters, take this one with a grain of salt until they’re officially confirmed.

What do you think? Are you excited to see more of Gotham Knights at DC Fandome? Is the Batman really dead? Let us know your thoughts in the comments down below!