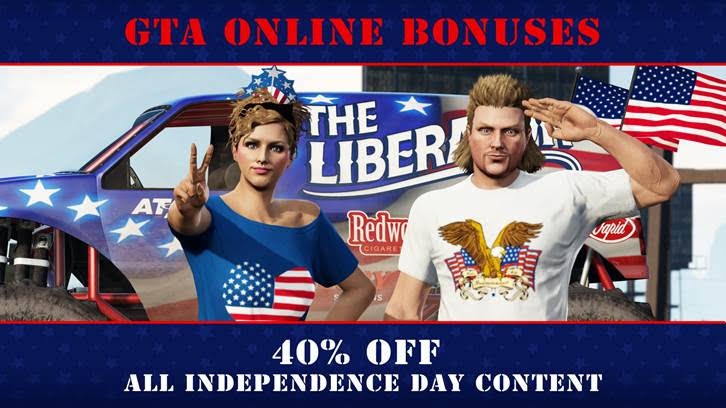 It’s Independence Day, and for those staying at home playing GTA Online, Rockstar isn’t letting the holiday go without an assortment of freebies, discounts and more. In a press release, Rockstar announced its GTA Online Independence Day 2019 plans, which you can read below.

Red, white and blue favorites make their return to stores this week. Whether you’re dressing head-to-toe in stars and stripes and ripping the lid off Tony’s Fun House or outfitting your collection of future-tech Mk II armory with patriotic liveries, you can jump into GTA Online to pick up these specialty items at a 40% discount:

Nothing says freedom like being your own criminal boss. This week makes the hustle extra sweet with a range of big perks and payouts for entrepreneurs across the state – and if you’re looking to expand your enterprise you can also take advantage of sales on several business properties.

If you’re hoarding a stash of valuable cargo, this is the perfect time to offload with Smugglers Sell Missions dishing out Triple GTA$, while Gunrunning Sell Missions and Special Cargo Sell Missions arepaying out Double GTA$. If you’re an MC President cruising the open highway on a Western Sovereign, you can unload Biker Business supplies with Double GTA$ on all Biker Sell Missions.

You can also rack up Double Rewards by playing Client Jobs and the Missile Base Series or set it and forget it with passive benefits like Gunrunning Research and Nightclub Incomerunning at double speed all week long. 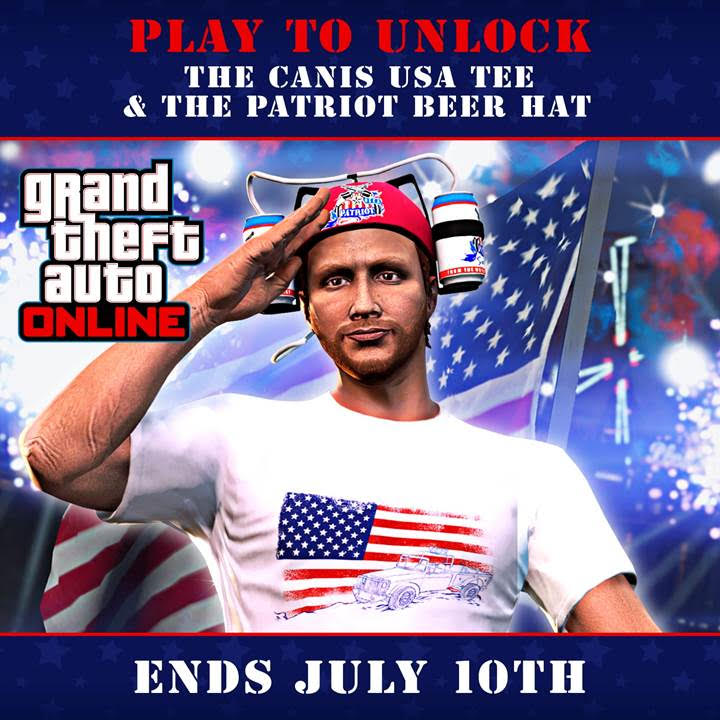 Don’t forget to login and play GTA Online to obtain the Canis USA t-shirt, and the Patriot Beer Hat.

In addition to the Independence Day supplies, you can take a whopping 75% off all ammunition, including Mk II rounds. There are also discounts on all sorts of vehicles – including rocket boosted Special Vehicles and their philosophical opposite, the Atomic Blimp – as well as all Facilities, Hangars, Nightclubs and their Renovations and more. Take 40% off the following through July 10th:

Not bad, right? Now go out there, and celebrate Independence Day GTA style!

Anthem Cataclysm PTS Info Reveals Some of the Things Coming to the Game, Watch Footage Now