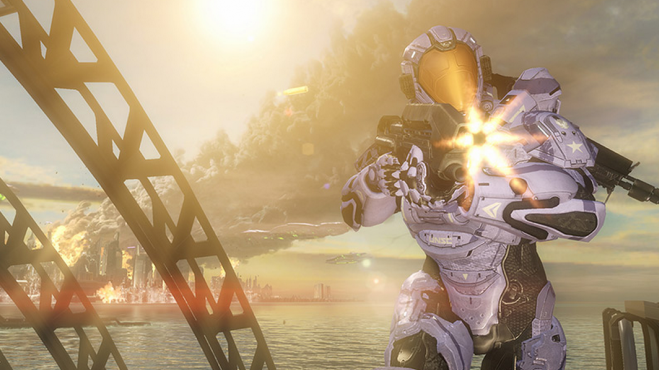 Halo 4 fans can expect a number of changes being made to the game’s War Games multiplayer playlists in the coming weeks.

Looking forward to Halo 5 on the Xbox One, 343 Industries community manager Jessica “bsangel” Shea writes in the latest Halo Waypoint blog update that “focusing on the future also includes nurturing the current experience, so we’re in the process of tightening up Halo 4 multiplayer to ensure your online games contain more headshots and good times than you could ever hope to handle.”

Also this Monday, as a potential solution to increase the frequency in which DLC owners see purchased maps in matchmaking, 343i will be turning Infinity Slayer in to a DLC-required playlist, meaning that you will need the Majestic Map Pack in order to play Infinity Slayer.

The decision is not entirely final, as Shea stresses, “…this is an experiment, and is in no way, shape or form a permanent move at this time. The primary thing to note is we know you want to play your DLC more often, and we’re dedicated to doing everything we can to make that happen.”

Two weeks later, on September 30, the studio will be removing the Multi-Team, Dominion, and Champions Bundle DLC playlists. “As the numbers from those playlists shift into other ones, game quality will improve as skill matching and the other parameters used during the search phase (matching with other players that own DLC, for instance) become more effective,” writes Shea.

Here’s what the Halo 4 War Games playlist will look like as of September 30:

The studio will also offer a rotating playlist that will change every two weeks. Here is the tentative schedule for the rest of the year, which Shea notes is not yet final:

Shea explains that, “We know removing playlists might sometimes be painful, but it is a necessary part of sustaining a game and its multiplayer community, and we do it knowing the positive impact it will have on your online experience.”

Lastly, the team has publicly stated the issues they will be looking into that came into effect during the release of the Champions Bundle DLC last month. Shea writes that we can expect an update late September that will look into the following:

Despite entering into the tail end of its life cycle on the current-generation Xbox, it appears that there is a lot to look forward to for Halo 4, as small as the upcoming changes might be.

With that, we want to ask you, how much longer do you see yourself playing Halo 4? Are you dropping everything Xbox 360-related when the next-generation consoles hit, or do you see yourself sticking with the Xbox 360 and Halo 4 well into the future? Let us know in the comments!