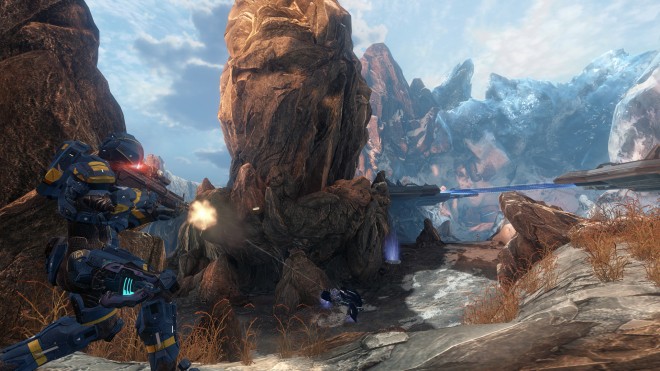 More Halo 4 multiplayer map walkthroughs are inbound. Plus, 343 Industries give fans a behind-the-scenes look at the vehicle-friendly Meltdown map, and the sinister new Mantis vehicle. Lastly, we got a bag of skulls. Halo 4 campaign skulls, that is!

Enjoy yet another Halo 4 multiplayer map walkthrough. Haven was one of the earlier maps revealed by 343 Industries, of which you may have already seen some footage. This time, however, you can get the inside perspective of lead multiplayer level desinger on Halo 4, Kynan Pearson.

“While most Forerunner technology appears to support safe usage over immense passages of time, the failure of specific systems can cause a cascading effect which dramatically impacts a site’s foundational composition. This frigid moon’s icy conditions once served to control a Forerunner reactor’s intense heat, but those days are now long gone,” reads 343’s description.

343 mentions that they eventually landed on a figure eight-style layout which should hopefully cater to both infantry and light vehicle combat. While the open, figure eight-shaped road lends to vehicle combat, infantry will find plenty of room to maneuver in the various caves and pathways.

Being a large, vehicle-heavy map, expect games to start off with a bang as both teams spawn near both the Railgun and an Incineration Cannon. No Banshee spawns in this particular map by default, so players can expect a heavy focus on ground-vehicle combat. Infinity will keep infantry well-equipped with ordinance like the Scattershot, Sniper Rifle, SAW, Rocket Launcher, and Fuel Rod Cannon. You can also look forward to playing around with the Mantis on this particular map.

With bases built into the outer walls, Meltdown will play really well in the Dominion game mode. Teams will spawn in either the Alpha or Charlie bases before proceeding to battle it out for the central base. This is in contrast to Longbow, which has both teams attacking all three bases at the start of a match.

Speaking of the Mantis, systems designer Ali Zandi shares some of the development process behind its inception.

The above image was one of the few sketches that served as the Mantis’ inspiration for the development team, according to Zandi.

Inspired by Halo Legends, the Mantis started out as an armored exoskeleton that Spartans would equip, augmenting their abilities. It had numerous weapons, roles, mechanics and shapes, and featured a dedicated shield. It also had the ability to jetpack, use thrusters, and fire a Railgun. We even had an early prototype that consisted of the Chief riding in a giant scaled-up Chief. The idea then evolved into an actual mechanized vehicle, which was more epic in scale and fit the UNSC better.

In-game, the Mantis will serve as the more agile version of the Scorpion tank, sacrificing firepower for maneuverability. Like the Scorpion, it can be boarded by enemies (especially vulnerable immediately after its stomp attack) or EMPed with a Plasma Pistol charge. Recalling the first trailer that introduced this bad boy, you may have felt concerned due to its immense fire power. On top of some of the weaknesses described above, Zandi explains how its effectiveness has been properly balanced:

The chain gun is effective up close, but has significant projectile spread and heat when laying on the trigger for long periods of time (once the chain gun overheats, it goes into a cool down sequence for a few seconds, disallowing the weapon to fire during that period). The rocket pod delivers massive direct impact damage, as well as moderate amounts of splash damage to infantry and armor. It has two firing modes, one being semi-automatic, and the second being a full volley of however many rockets are loaded in the pod. A total number of five rockets can be queued up by holding the weapon’s trigger down, or fired individually by latching the trigger. Once all five rockets are depleted, the Mantis initiates a reload sequence, replenishing the rockets after a few seconds.

Are you excited to try out Halo’s newest addition to the already wide assortment of vehicles?

Though this is more of a campaign item, what would a Halo game be without its Skulls?

Check out the list of skulls available in the Halo 4 campaign right from the get-go. For those treasure hunters out there, 343 writes, “if you’re the type that leaves no stone unturned in your quest for hidden secrets, fret not, because the Domain Terminals will scratch that itch… and more.”

That wraps up this Halo 4 round-up. Any particular multiplayer maps that have caught your eye so far? Let us know in the comments below!

[Updated] Call of Duty: Black Ops 2 Will Have Weapon Prestiges