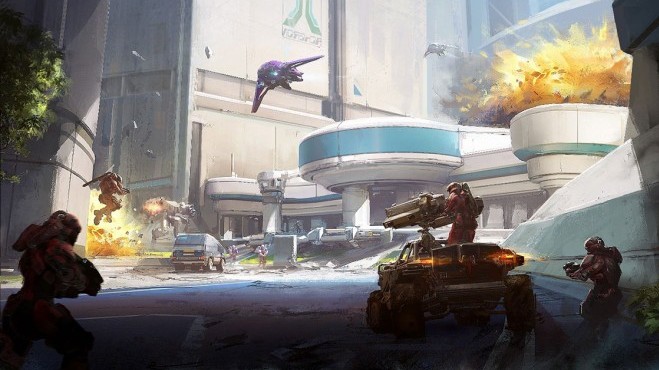 Major improvements are coming to Halo 5: Guardians in the coming weeks with the recently-revealed Cartographer’s Gift update.

Fans got a brief teaser yesterday, but developer 343 Industries took the time to explain what else is in store during the latest community update earlier today. Read on for a summary of what’s coming, including new maps and REQs, along with changes to playlists and the game’s user interface.

As we saw yesterday, the Cartographer’s Gift update will throw a ton of new REQ packs into the mix, including new weapons, armor, and Legendaries. Warzone fans will get a brand new map called Battle of Noctus while Arena-goers will get three new maps: Overgrowth, Antifreeze, and Entombed.

Here’s a sneak peek of a few of the new REQs and maps. Clearly, more will be revealed closer to launch, which 343 says will be during the week of December 15.

The upcoming Forge Update “will support a basic implementation of File Browser, which will allow you to bookmark, play, and share maps and modes created by players on your active roster,” says 343. You’ll need to follow the player you want to download a map or mode from. Improvements to the File Browser will continue in future updates.

The Cartographer’s Gift update, launching during the week of December 15, will also mark the start of Arena’s January 2016 Season (ending January 31). Pre-Season ranks, which includes your current CSR for each playlist as of this writing, will be saved on your Halo Waypoint Service Record before being reset in-game for the upcoming season. At the end of each season, those who’ve qualified (played 10 matches) in at least one playlist will earn an “exclusive seasonal pack reward emblem.”

Social playlists are coming with the arrival of the next update, one of which is confirmed to be Big Team Battle. 343 says that “all social playlists will feature appropriate join-in-progress windows” and that there’ll be a mix of currently available modes in social playlists.

In the next update, Free For All will be updated to include six players instead of eight. 343 explained that the “decision is not one that was taken lightly, and ultimately, it was decided that 6 player FFA gives players a bit more room to determine who’s the best on the battlefield.”

December’s update will also bring a number of improvements to Halo 5’s user interface, including a few new features as well. You’ll find the current patch notes below, though 343 says more surprises are to come.

The next patch will also introduce “additional updates for those who’d like to further refine their controller settings,” says 343.