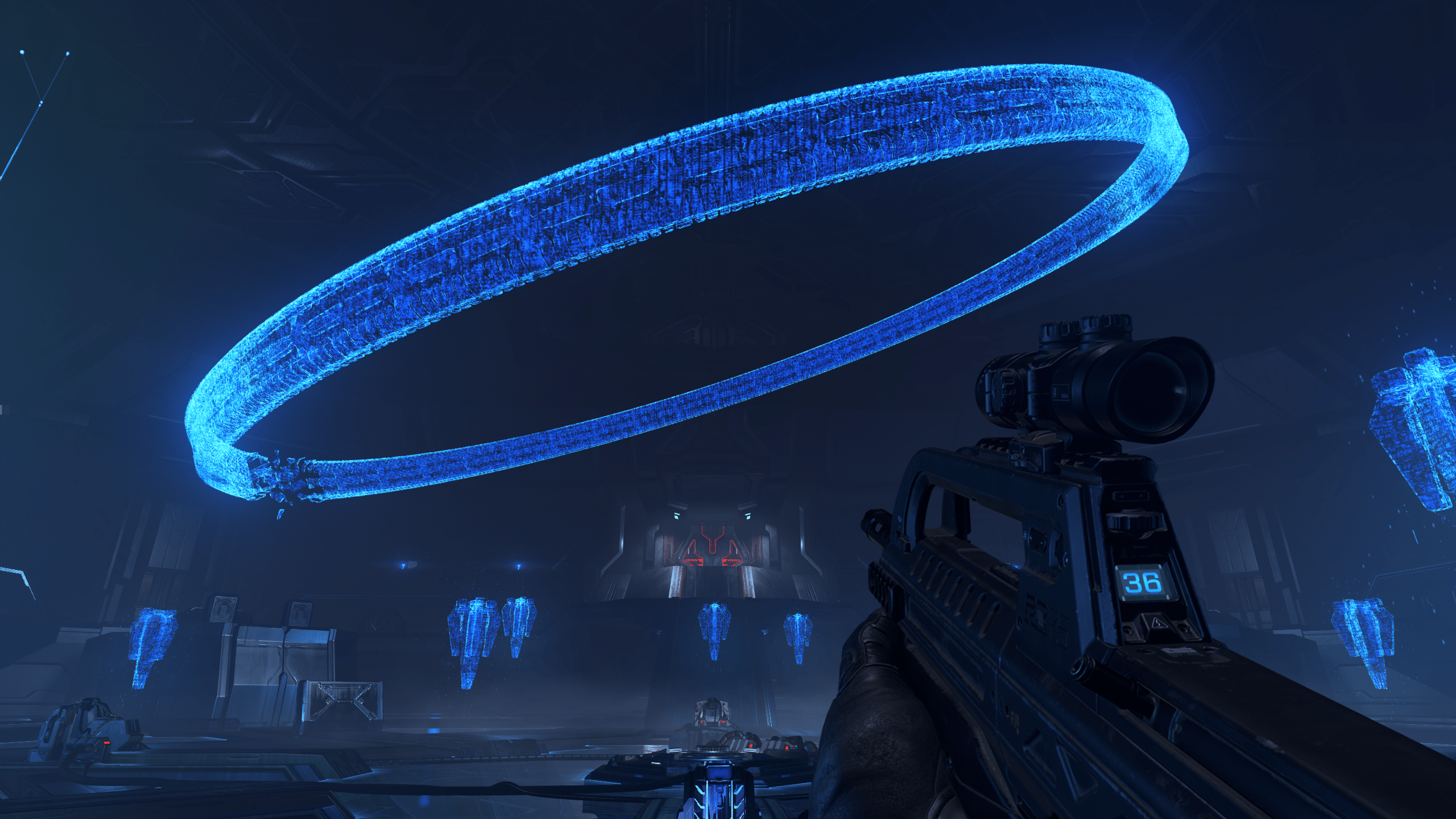 Halo Infinite was meant to be Microsoft’s premier launch title for the Xbox Series X, but after a mixed reception to a gameplay showcase just months before the scheduled release date, Microsoft made the tough decision to push the game back by an entire year, leaving their next generation console high and dry for launch exclusives. It’s been a long wait, and now just weeks after the series’ 20th anniversary, Halo Infinite has finally arrived. When a new Halo drops, the gaming world pays attention. Did the decision to delay the game pay off? Read on in our Halo Infinite review.

Halo Infinite picks up 18 months after Halo 5: Guardians. The Banished – an enemy faction introduced in Halo Wars 2, have handed the UNSC a crushing defeat. The mighty Master Chief himself falls to the Banished’s leader, Atriox, and is left floating endlessly in space for the next several months. That is, until a castaway UNSC pilot miraculously finds the Chief and restores him back to full power. A lot has happened while the Chief was gone. The UNSC have lost the war with the Banished, including their famed ship the UNSC Infinity, and his longtime AI companion Cortana is now gone. Most importantly, the UNSC have lost the Halo ring they were fighting so hard for when the Chief was defeated. With just a handful of soldiers left to fight, Master Chief promptly orders the pilot to take him back to the mysterious new ring, Zeta Halo, and the story of Halo Infinite begins.

Infinite’s story is surprisingly lowkey. For most of the game, you are following leads to shut down the Banished’s attempts at activating the ring. Their new leader, Escharum, has made a deal with a mysterious new character known simply as The Harbinger. Her goal is to bring the rest of her species, known as The Endless, back to life. Throughout the game, we are warned about how dangerous The Endless are. At one point, it’s even said that The Endless are considered a bigger threat than The Flood. This is a huge deal, as the Flood were considered basically the end of all organic life in the original trilogy, so the idea that there is something even worse on this ring, is concerning to say the least. 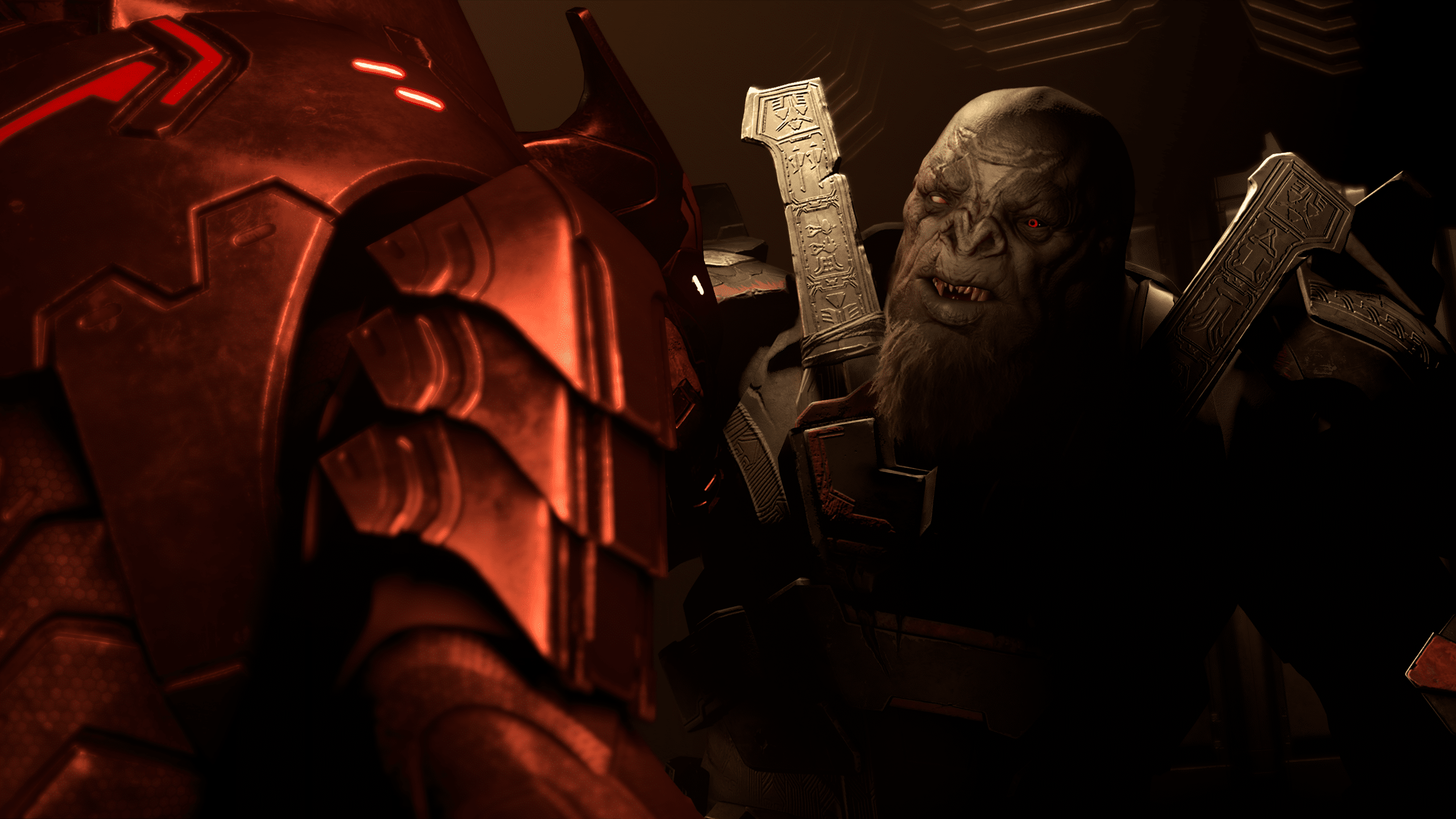 Soon after landing on Zeta Halo, you will meet a new AI known as The Weapon. Throughout the game, questions are asked about her origin, and what her purpose is. The Weapon is a copy of Cortana that was tasked with deleting her predecessor after she succumbed to rampancy. I liked the introduction of The Weapon overall. Master Chief’s new Cortana model has a quirky, almost child-like personality, which is in stark contrast to the Cortana of old. For a character that is so prominent in any story involving the Master Chief, this is something that could have been very easy to mess up. But as the game progressed, I grew to like The Weapon. 343 have given her a wholly unique personality from Cortana, but it meshes well with the Master Chief’s stoic demeanor.

Despite it’s 8-10 hour runtime, Halo Infinite’s campaign feels much like a prologue. This makes sense, as 343 have famously said that they plan to make Infinite “the start of the next ten years for Halo.” However, in this initial offering, surprisingly little actually happens to move the plot forward. Rather, it feels like a “reset button” of sorts and the start of a new saga. By the end of the campaign, you’re basically right back where you started, with a couple of big bads down, a handful of revelations regarding Cortana, and a clearer picture of what has happened in this universe over the past year and a half. This isn’t necessarily a bad thing, however. The story is engaging enough with what it does, and the gameplay is so great that the story essentially takes a backseat. However, if you’re expecting a sci-fi epic akin to Halo 3, that’s not what Halo Infinite is yet. It’s clear that Halo Infinite’s story has only just begun. 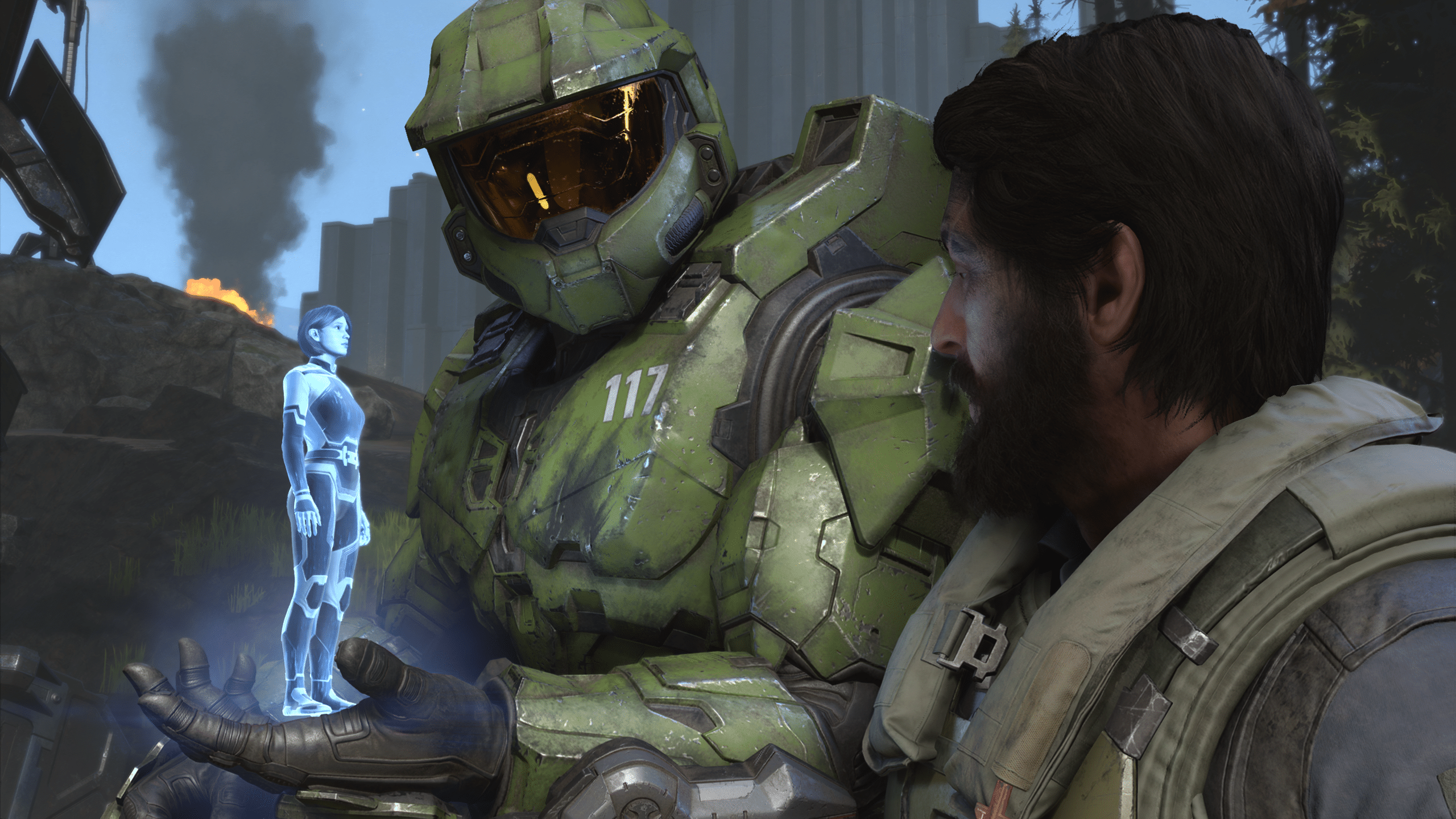 One of Halo Infinite’s biggest selling points is the fact that they’ve switched to an open-world structure. Many long time Halo fans were skeptical of this decision — understandably so, as it’s something that Halo has never done before. So, did Halo Infinite end up being “Far Cry Halo” as many had feared? Sort of.. but not really.

First and foremost, the open world itself is excellent. It is incredibly detailed and filled with Easter eggs and collectibles to find. It does get a bit “samey” due to 343’s decision to use the same forest environment for the entire map, and the largely copy and pasted enemy outputs. But I didn’t find it to be a problem, especially considering the high probability that there will be new biomes and enemy races in future expansions.

With all of that said, I think they could have done a better job at merging the open world exploration with the linear campaign. It was jarring at times going to do a main mission and being locked into doing three of them in a row before getting a chance to explore the open world again. It’s almost like they went halfway with the open world idea. Some side missions would have really helped here, perhaps involving the pilot or other Spartans. Admittedly, there was a strong outcry from hardcore Halo fans that what they wanted was a traditional, linear Halo campaign. Many feared Infinite would go too “Far Cry” with its open world structure and that certainly wasn’t the case. It’s a difficult dilemma but in the end, I think they struck a pretty good balance.

Open world exploration is also greatly aided — by what is in my opinion — Halo Infinite’s single greatest innovation, which is the grappling hook. It’s hard to overstate just how much adding this grapple hook to Master Chief’s kit adds to the game. It is comparable to the addition of dual wielding in Halo 2 — but this is even more transformative. It enhances basically every part of the game, from combat to exploration. Whether you’re clearing out fodder or going up against challenging bosses, the grappling hook makes it better. 343 have built the entire world around it. The generous cooldown means that grappling around the map is almost faster than it is to use the vehicles, which can be difficult to use on rough terrain. Scaling mountains with it is no problem, as you can basically use it back-to-back after a few upgrades. This mechanic alone is hands down the best part of the game.

In regards to combat, it is excellent. Controls are tight as expected from a Halo game. The weapon balance is surprisingly good as well. Weapons that feel weak in multiplayer like the Pulse Carbine are surprisingly effective in the campaign. Halo’s enemy AI also continues to be one of the best in the industry. At one point, I had to put down the controller when a Brute killed me by throwing an explosive barrel and shooting it in mid-air. Grunts dish out brutal, yet hilarious insults and voice lines at you based on what’s going on in the gunfight. The whole experience makes combat in Halo Infinite a joy. 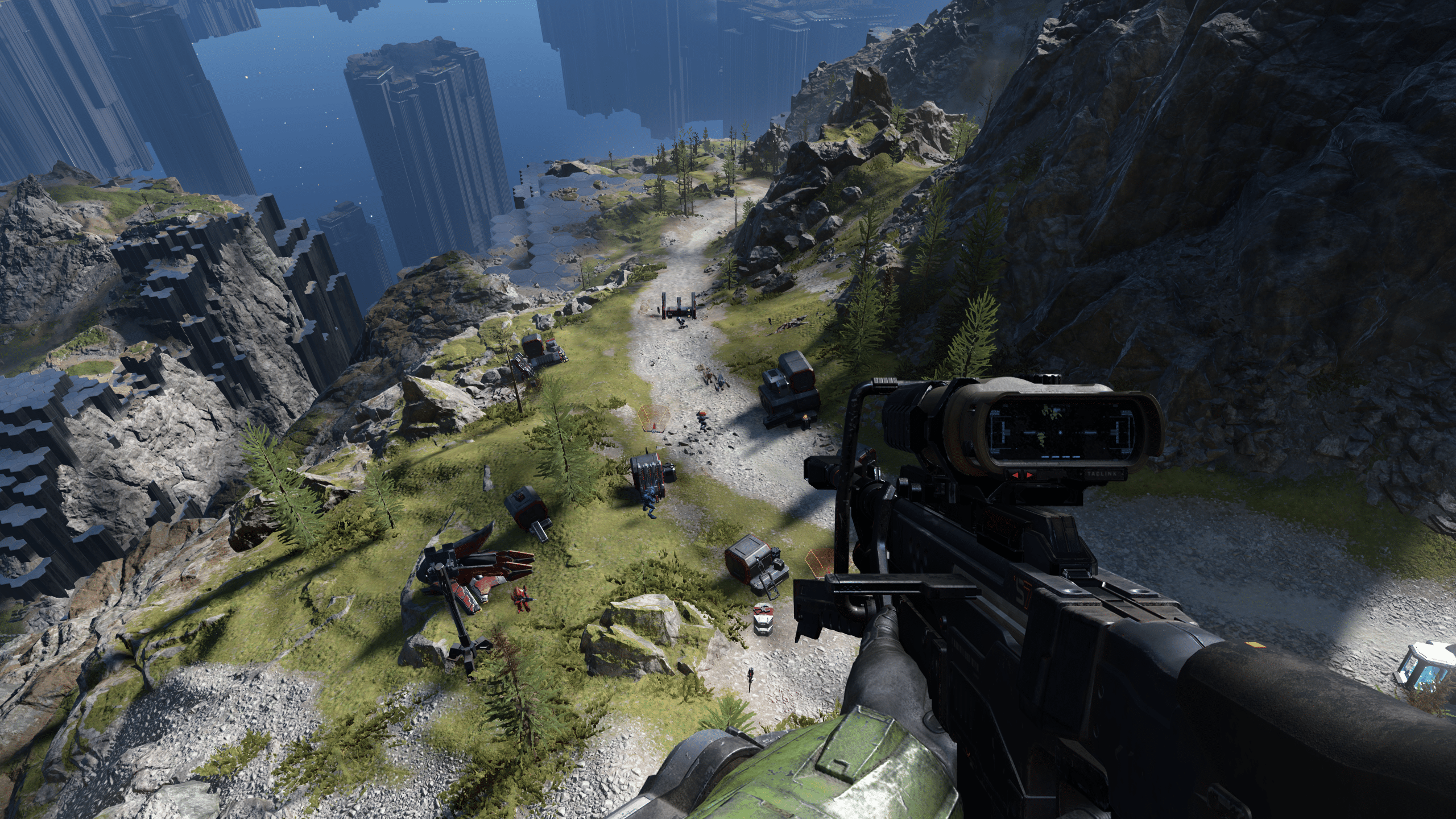 Halo Infinite’s open world is the ultimate sandbox. Zipping around the map with your grapple hook is a blast, and the secrets and collectibles around the map give you plenty of reason to do so. While the skill tree is not the deepest, the health and grapple hook upgrades are crucial for some of the later boss fights, and the audio logs give you great insight into Zeta Halo’s background and what lurks beneath.

While this is primarily a Halo Infinite campaign review, I wanted to briefly touch on the game’s multiplayer as well. In short: it is fantastic. Halo Infinite multiplayer is a perfect blend of old school Halo, with just enough modern flair to keep new players and fans of Halo’s contemporaries happy. The movement is fluid without being too chaotic. While Halo purists may not be fans of the sprinting and sliding mechanics, sprinting gives you a barely perceptible speed boost and comes with all the drawbacks that sprinting in first-person shooters usually does (i.e. sprint out times).
And there are still the usual benefits to walking, like better accuracy, and having your gun up at all times.

The maps are great for the most part too. Live Fire is a standard, asymmetrical, “three-lane” map that flows well and has just enough flanking opportunity, while Recharge is a little more sporadic, but never leaves you too exposed. Sadly, the map count does seem a bit on the low side at launch. There are just ten maps total across all modes, three of which are BTB exclusive. With Season 2 not arriving until May 2022, the low map count could get stale, especially for casual players. Thankfully, the game’s free-to-play model means the barrier to entry is lower than ever, and the frequent mid-season events should freshen things up. Halo Infinite eSports has been doing phenomenal as well, so all signs point to the game having a lot of eyeballs on it for a long time to come.

All in all, Halo Infinite is a worthy entry to this legendary franchise. That is an achievement by itself. But what I really appreciated is the fact that 343 took risks. These risks are things that could have completely soured the experience and turned away even the most diehard fans of the franchise. In the end though, those risks paid off. Infinite is in my opinion, 343’s best Halo title yet, and I couldn’t be more excited to see where it goes from here.