After completing the introductory mission and learning all the ropes, you are thrown into a small camp, which serves as the game’s central hub. Here, you can do a few things, though most of it will be spent in slotting new character perks and matchmaking.

There isn’t a whole lot to do here, which sadly seems to be the general complaint of Hood. As of writing, Hood: Outlaws and Legends only has a single game mode that stretches across five well crafted maps. There’s no single-player, which is fine as the game was always online focused, but being that, it is a rather huge disappointment to have so little. It’s a damn shame to be honest.

The one mode that Hoods has is called “Heist,” and this is a multi-objective team-based game where the goal is to steal a treasure chest and escape the area before the other team does. It’s a pretty simple game mode, but one that is heavily layered in its multi-step process. 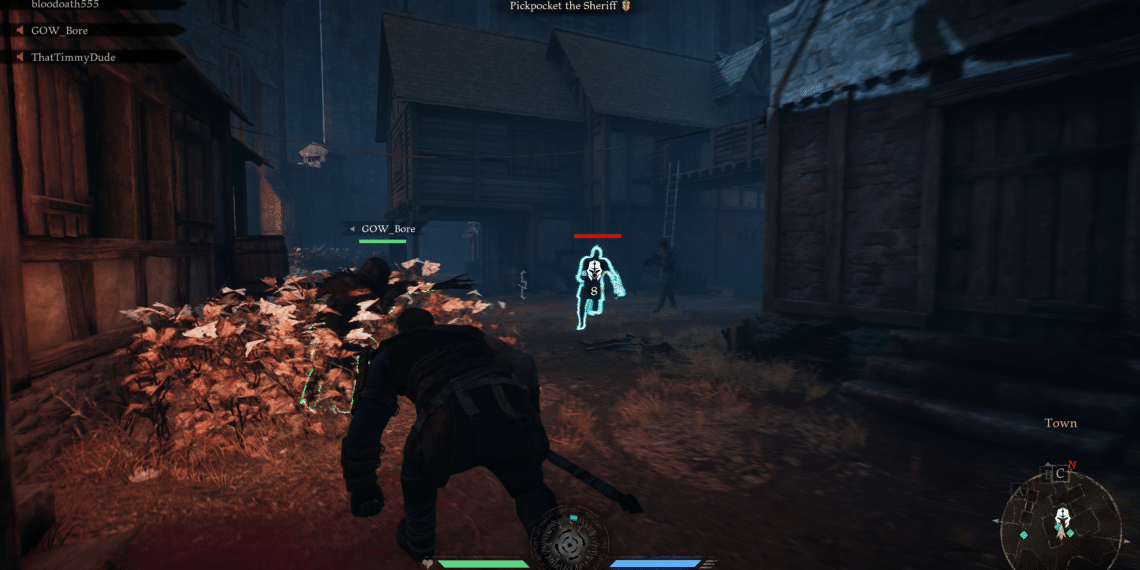 Matches all begin with a full party of players, two teams of four, each starting out on opposite ends of a map. The first team objective is to collect a key, which is being held by a Sheriff. Sheriffs are basically large knights that deal high damage. They patrol each level, and despite being able to kill every other NPCs, Sheriffs can only be stopped momentarily. Because of this, the wisest approach is always stealth so that you can easily steal the key from one.

This first phase is usually the warm-up, a great opportunity for you and your teammates to be total badasses as you sneak around and kill NPCs in the most Assassin’s Creed-like way. Take that as a good compliment, because it’s actually very fun, something I wished out of Assassin’s Creed Unity when it originally released.

Once you and your team have successfully gotten the key, your next objective is to infiltrate a stronghold and locate the treasure chest. Things really take a turn here, as the stakes become riskier with the opposing team now likely on your tail.

I found from a combat standpoint we were now more in a rush to capture situation, no longer focusing on staying hidden, but instead rely on strength to breakthrough lines of defenses and swiftly dealing with other players. Having a full team go in and tactically take out another as we battled over a key felt really fun. And this same excitement continued on even in the final phases of transporting the treasure chest to our boat for safe travel. 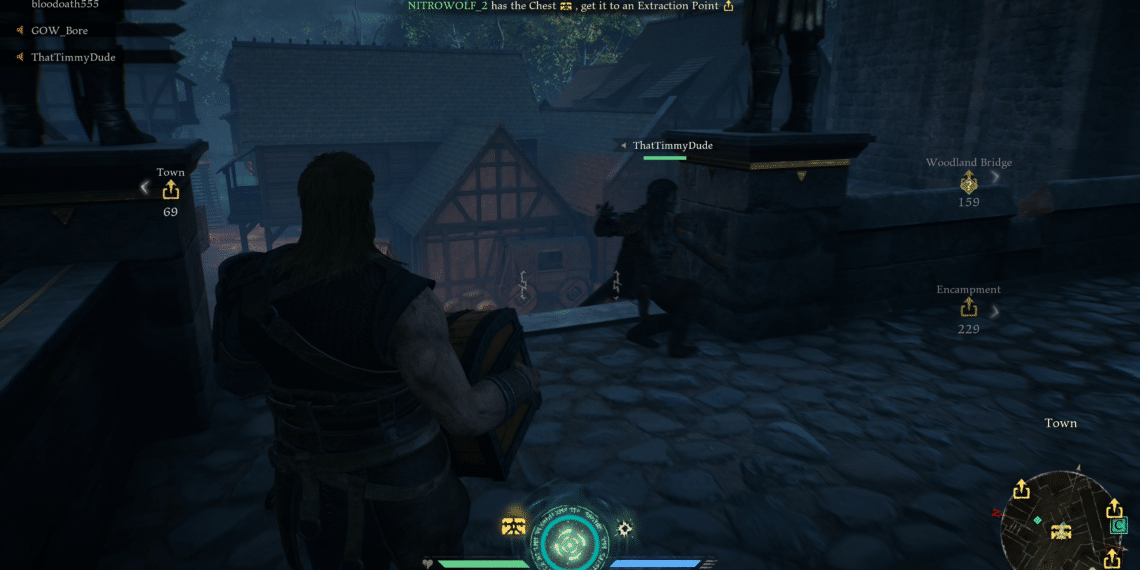 The final objective in a Heist is to transport the treasure chest, and to move it onto a boat using a mechanical lift. Here, the match turn into a capture and defend type of mode, although one or two players are immovable as they work the lift. An interesting twist that requires full team work.

Winning a match is a pretty satisfying feeling, especially when everything works exactly as it should. What I love even more about this mode is that no matter how much progress one team makes over the other, the losing team still has a chance of making a comeback as all progress made is essentially shared. In a game that doesn’t score based on kills, it’s nice being able to trade advantages between the team.

I’ve had countless matches where we were losing badly in the first two phases (and vice-versa) with the last minute leading to a major balance shift. That can mostly be chalked up to the fact that there are capture points loitered throughout the maps that serve as spawn points. For me who love playing as a lone wolf in a game, these capture points are a nice addition as they really feel like they can turn the tide of battle. Seeing a team dominate from the very start, only to be decimated by well planned captures adds a strategic value to Hood, and a very fun one at that.

I feel a lot of work was put into Heists, as it’s well thought out. However, after it didn’t take very long to feel like I’ve exhausted all there was to offer in Hood. While I still had much leveling and perks to unlock, the whole one game mode thing is a pretty big deal breaker, especially for an online-centric game.

And as mentioned, it’s a shame because I really do like how Heists operate and would have loved to see what more the team had to offer in some other unique modes. Granted there is a new one coming in the first year roadmap, along with a number of seasonal events and more unlocks, but I can’t help but feel that maybe the game should have waited to ship with all that. There might be fun to be had here, but it’s hard to see it having any long legs.

One of the more exciting aspects of Hoods has to be the very unique hero classes it has to offer. In total, there are four classes ranging from stealth, brute force, range, and of course the one geared as a healer.

Playing each of them, I was pleasantly surprised by how well they differed from one another. Example, the Brawler (brute) has immense strength, so much that they’re capable of lifting up gates to allow players to easily travel through the maps. They’re extremely strong, and it shows even in their attack as you can easily take someone down in just a few swings. 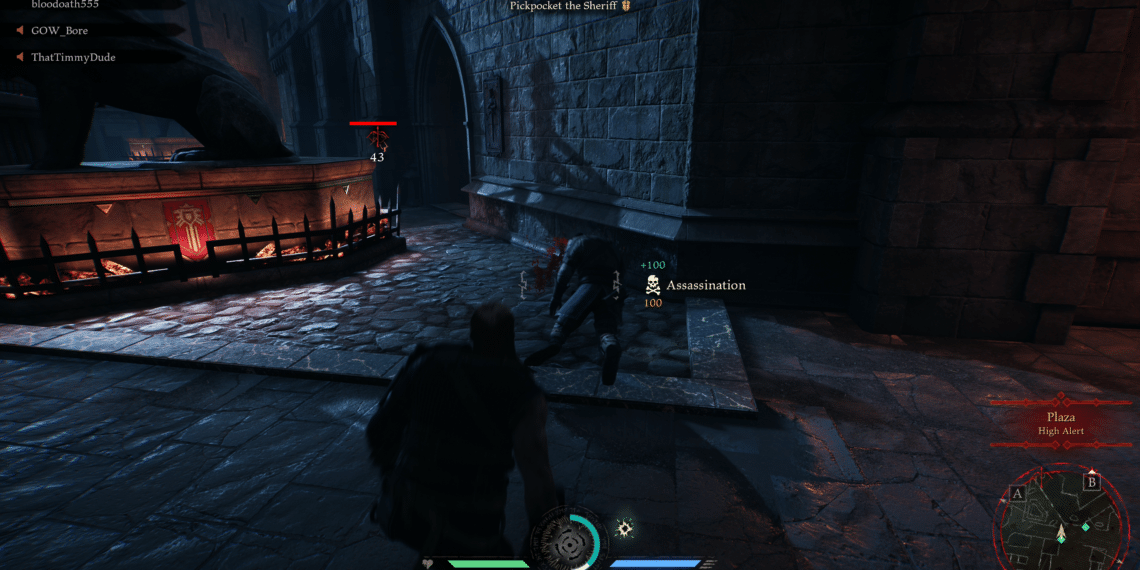 However, because of their brute strength, they make easy preys for Hunters (stealth class) and Rangers since they’re slow moving. The idea with the balancing is rock, paper, scissor, between one class has a advantage over another. In theory, it should be “balanced”, but in reality, it isn’t. This is mostly due to the fact that there is no hero/class locking, allowing anyone to play as any class they like. This means that you could have the same class used by multiple teammates.

It didn’t take very long to see what the meta was becoming, which happened to be a full team of brawlers. This in turned worsen Heists as the intended flow felt ruined. Players were no longer playing strategically, or using stealth since a full team of Brawlers could easily dispatch NPCs and players.

After a while it got frustrating that I couldn’t just sneak around the initial phases anymore as NPCs were constantly put on high alert. I would soon learn why as four burly men would rush up and beat me to death. It got to the point where it just wasn’t fun anymore.

No Robin in This Hood

For what it’s worth, I really like the idea of Hood: Outlaws & Legends. From a combat standpoint, I think it plays great to the point where I’m having a ton of fun just going around and killing things. But sadly this is where most of my praise ends, as while I think Heists is a really creative mode, the unbalancing ruins it. Add to the fact that it’s the only mode to play across the six  maps, then you got yourself a very repetitive game. This is only after a short few hours, which never bodes well for any online multiplayer. Hood: Outlaw and Legends is a great idea on paper, but not one so well executed.