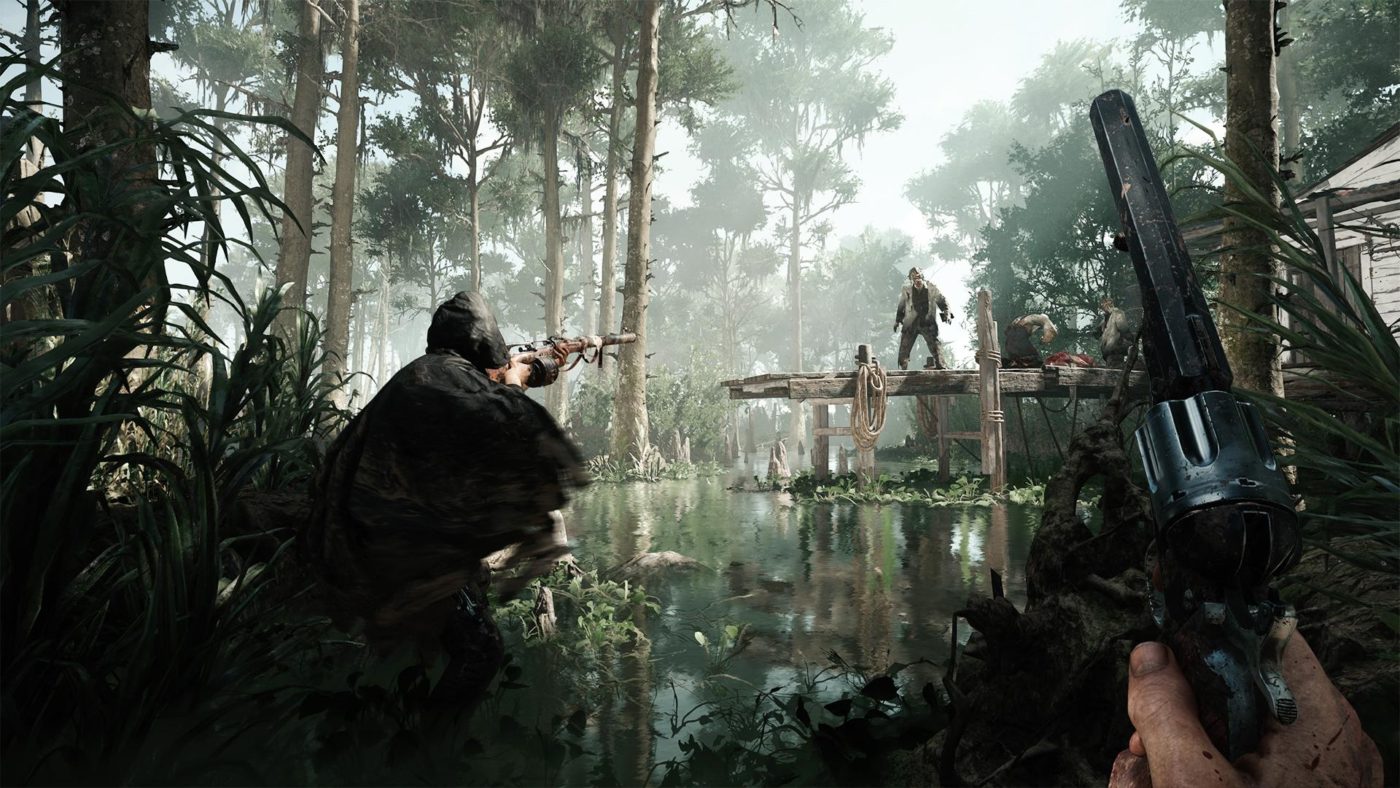 The long-awaited Crossplay function between Xbox One and PlayStation 4 is here! You can now find partners using both consoles when looking for Random partner(s). Currently invites only work for players using their own platforms.

We have added two new AI variations to the game. You will now find the Grunt Doctor, who deals poison damage and drops a medical kit after being killed, and the Concertina Armored, covered in concertina wires causing bleeding damage, wandering in the swamps.

The Sun has set in the Bayou, a new time of day is here! You can now explore the swamps in brand new lighting. Depending on how you move through the Bayou, you can use the sun to gain an advantage over your enemies in a fight.

This update features two new weapon variants, the “Martini-Henry IC1 Marksman” and the “Mosin-Nagant M1891 Obrez Drum”, a new tool, the “Decoy Fuses”, as well as a new trait, ’’Levering”, allowing lever-action rifles to rapid-fire from the shoulder, giving the Winfield rifles a previously unseen new layer of tactical flexibility at close quarters.

The powerful Avtomat rocks a new look and gameplay rework this update, making it harder to control at range with a slightly increased rate of fire and more ammo drain. The update also adds a slight ear ringing effect when you unload your weapons too fast. Additionally, our current damage and projectile system sees a major balancing pass in 1.3 that helps some of the weaker ammo types to keep their damage better up to medium distance. More details can be found further below!

Update 1.3 brings a reworked partner inspection screen to the lobby where you are able to look at your fellow Hunters in more detail, as well as a new Death Screen, that additionally displays the enemy player’s hunter and their gear.

The Anniversary skin contest winner skin is finally here. We have also added a new Legendary Hunter as well as several additional Legendary Weapons. You can unlock those with Blood Bonds from the in-game menu. In addition, you can find brand new DLC packs in the store – Zhong Kui, Fire Fight, The Arcane Archaeologist, The Seeker Bundle, The Uncanny Bundle and The Gunslinger Bundle. Make sure to check them out!

The rework of how projectiles lose damage over distance is a pretty big change, touching most of the weapons in the arsenal in one way or another. However, the actual gameplay changes should be pretty minimal for the majority of these weapons, and only affect those we actually want to boost. The weapons we wanted to benefit the most from this balancing pass are the Winfield rifles and the Nagant M1895 Officer Carbine to boost Compact bullets, as well as the Vetterli Karabiner 71 and Springfield 1866 rifles for Medium bullets. All of these weapons will most noticeably have an increase in their two-tap chest shot capability, which in the case of the Winfield goes from around 25m up to 40m+ meters, making that weapon overall a lot stronger short to mid-range. Headshot range is also buffed quite a bit, placing the Winfield where the Vetterli was before, and the Vetterli going up to long distances of 150m+.

As a secondary goal, most Compact ammo handguns see a slight boost, but that is most noticeable with increased chest shot damage and extra headshot range as well, moving them to where the Winfield was positioned prior. Due to the systemic nature of these balancing changes, most Compact, Medium and Long bullet weapons see a change in some way, except for shotguns, which remain untouched! The detailed list of headshot range changes can be found below.

The Winfield has been struggling to find its place in the meta, being at an awkward spot and getting a lot of pressure from shotguns, semi-automatics, and fanning pistols at short-range as well as being outclassed – damage-wise – by long rifles at longer distances. It was very easy to either push away from a Winfield and fight at range or to close the gap and push in with rapid-fire weapons or shotguns at short-range. By combining the projectile changes with the new Levering trait, we hope that Winfield rifles start living up to their reputation as flexible weapons again. The Winfield rifles can arguably be considered as the first “assault rifles” in history, excelling in a number of different combat scenarios and being a true jack of all trades that complements the other more specialized weapons of the era in the Hunters’ arsenal nicely.

The Avtomat has always been a controversial weapon. Some love it, some hate it, or feel it has no place in the game. For us, it is an interesting weapon nonetheless, because it brings something to the table that no other weapons in Hunt’s 1895 arsenal provide: Automatic fire. In reality, machineguns were not uncommon at that time, but in the context of Hunt’s gameplay, it is quite challenging to balance as it is the only weapon of its kind and usually goes up against much slower firing designs.

With this update, we made a couple of changes to how the gameplay works using the rifle. We want to make the weapon harder to operate with a stronger ammunition drain and increased recoil, while still keeping it devastating in the right hands. The new Avtomat works best up to medium distances of 50 meters, where you have a good chance to place 2 hits on an enemy in a short tap burst. Firing over longer distances is possible of course, but players will have to fight the recoil much more aggressively and most of the time can be lucky to score a single hit per burst. Here is where the ammo drain will become noticeable the most, as the new three-round burst pattern will mean you can do that a meager five times before you run dry. At close range, the changes to the weapon are a bit more mixed: On one hand, the weapon shoots faster allowing you to pour rounds downrange at a faster speed, but on the other hand, it is less controllable overall as that recoil now hits you at a faster interval as well.

We hope that the Avtomat will be seen more as just another powerful choice in the end-game arsenal, just like the Auto-5, Dolch 96 and Nitro Express Rifle, they each come with some balancing drawbacks that allow other weapons to challenge them when exploiting their respective weaknesses. Where the Nitro’s weakness is mostly its limited ammo, and the Auto-5’s weakness is its limited range, the Avtomat has both of these weaknesses to a certain extent, but still allows for a more tactical deployment in the field overall.

We’ll be on the lookout for the next patch and more Hunt Showdown news. If you notice any other changes or bugs brought by the Hunt Showdown update 1.06 May 19 patch, let us know down below in the comments.