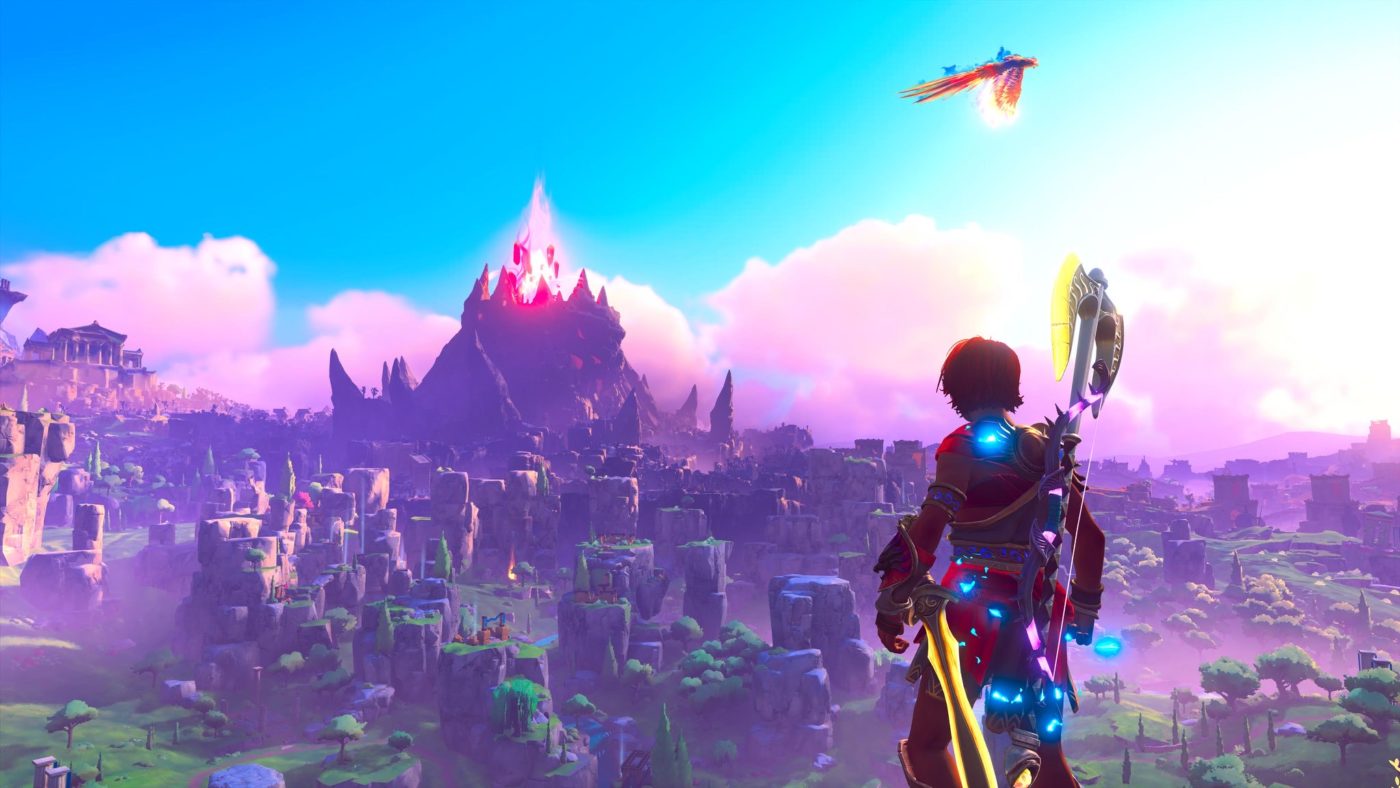 Depicting Greek Mythology in entertainment has forever been a staple in the genre. Whether it’s in movies or games, we’ve experienced countless adventures surrounding Zeus and the Olympian gods. Most recently, Ubisoft took a stab at the Greek setting in Assassin’s Creed Odyssey. Now, the French publisher has returned to the Greek landscape with Immortals Fenyx Rising. On the surface, you might think we’re heading towards “beating a dead horse” territory with the Greek stuff. But once you dive in, right away it’s clear that Immortals Fenyx Rising is something different. Ubisoft’s latest open-world adventure takes a more whimsical, comedic approach to Greek Mythology, all while still delivering a compelling story.

Our adventure begins with Zeus requesting the aid from the imprisoned Prometheus to help defeat the dreaded monster Typhon. Typhon, the son of Gaea and Tartaros, aims to completely decimate the Greek gods and their Olympian home in favor of his own sinister domain. Prometheus presents a wager to Zeus that a mortal would be able to defeat Typhon, in exchange for his freedom. Thinking such a task would be impossible for a mere mortal, Zeus agrees. Thus starts the tale of a young Greek shield bearer named Fenyx.

Throughout the game, Prometheus narrates every step of Fenyx’s journey in defeating Typhon with Zeus chiming in with his smartass comments. Some might find the humor tiresome, obnoxious, or annoying, but I on the other hand enjoyed the change of tone regarding this material. I’m a fan of Greek Mythology and while plenty of it may be interesting, some can also be a slog to get through. The upbeat, dad jokes style humor and back and forth bickering between Zeus and Prometheus fit perfectly alongside the game’s cartoony art style. But even with the light-hearted tone, Fenyx’s journey isn’t some walk in the park. 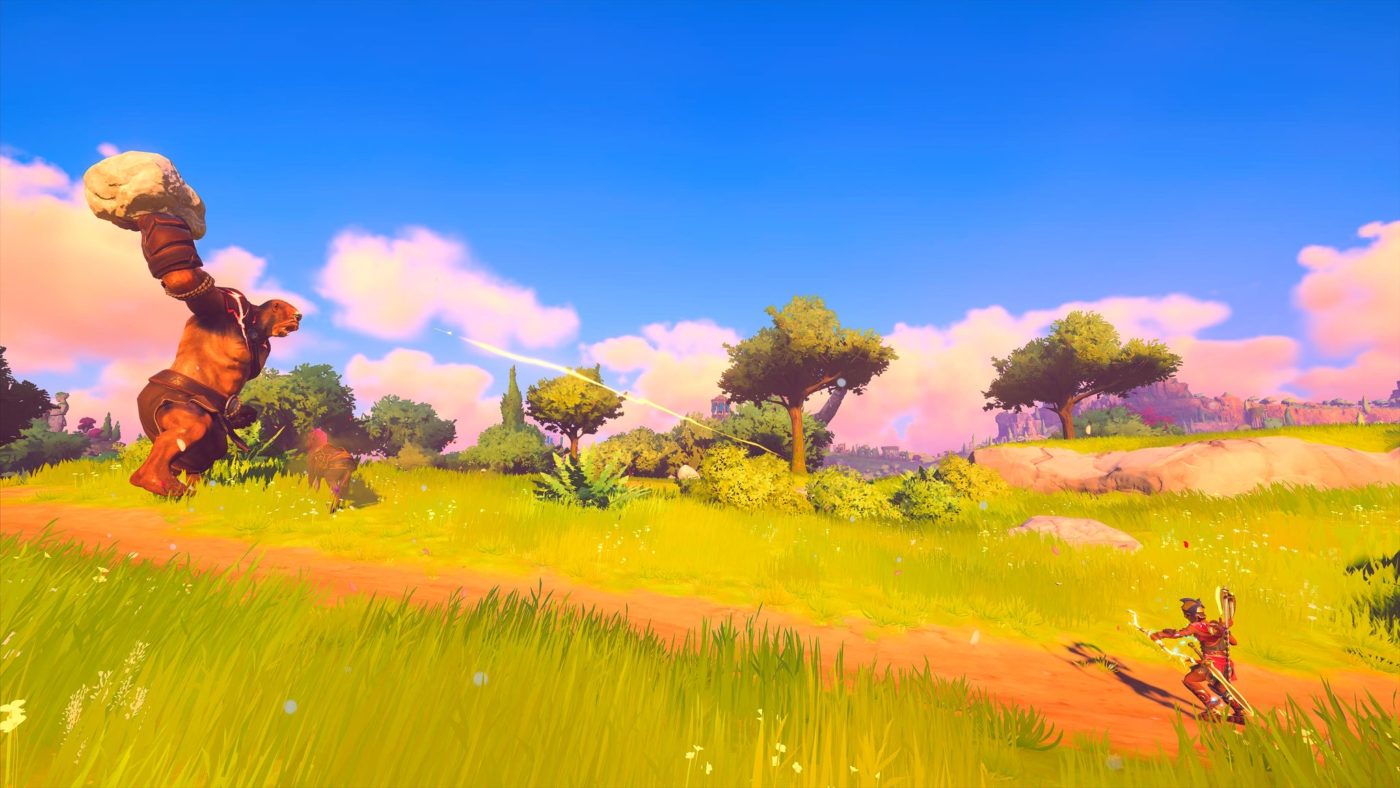 Before starting on your journey, you have the ability to customize Fenyx. Immortals Fenyx Rising has surprisingly good customization options for not only Fenyx, but for weapons and armor sets There’s different options for skin tone, hair length and color, and whether or not you wish to be male or female. Because the game’s default look for Fenyx was female, I stuck with my soon-to-be monster-killing heroine. You do have the option later in the game to further customize Fenyx’s appearance if you’re feeling the need to shake things up.

The first thing that grabbed my attention was the vibrant, colorful environment of the Golden Isle. Although the majority of the mortals on the Golden Isle have turned to stone, the island is beaming with life. Whether its the evil minions of Typhon or wild animals like bears and boars, there’s always something around the corner. From looking at the map, it would appear that the Golden Isle isn’t that big, but don’t underestimate its size. This world is vast and full of amazing areas to explore, and one way to get a better sense of your surroundings is by utilizing the Focused Sight. Fenyx has the ability to look around the map in first-person and pinpoint areas of interest such as chests, potion-making stations, dungeon-like vaults, and other valuable items scattered across the Golden Isle.

Simply from watching the trailers, some might make the observation that Immortals Fenyx Rising is quite similar to Zelda: Breath of the Wild. And those observations would be warranted, as there are many distinct comparisons between the two games in both the story and general game mechanics.

In order for Fenyx to obtain the necessary power to defeat Typhon, she must restore four gods who’ve lost their essence. Sounds familiar? Link had to free the four Divine Beasts to assist him in defeating Calamity Ganon. Immortals Fenyx Rising allows you to explore virtually anywhere, gifting Fenyx with exploration abilities like being able to climb any surface, swim in water, glide through the air. And just like Link, Fenyx is also cursed with having to deal with a stamina bar.

Besides standard light and heavy attacks, Fenyx can unlock God abilities. Fenyx begins her adventure having learned three key God abilities to aid in defeating Typhon, with one in particular taking notes from Breath of the Wild. By using Herakles’s Strength, Fenyx can lift and push large objects such as boulders and metal boxes. Sounds just like Link’s Rune ability of Magnesis, right? 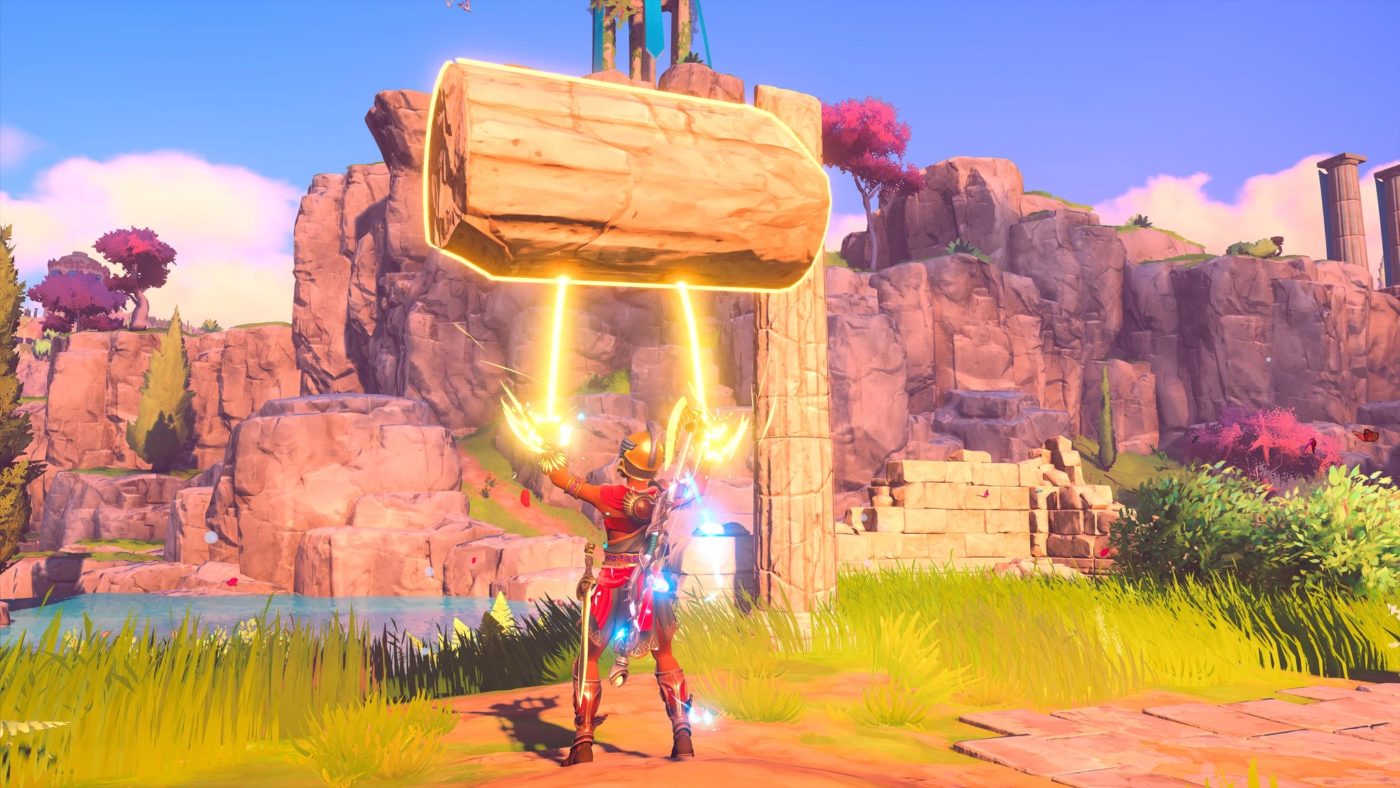 Scattered across the Golden Isle are cracks in the earth called Vaults of Tartaros. These vaults are carbon copies of the Shrines found in Breath of the Wild. Fenyx receives a bolt of Zeus’s lightning upon completing vaults, which are used to upgrade Fenyx’s stamina. The vaults also act as fast travel points, so scouting them out for their strategic locations is just as important. Having vaults as fast travel points should not be underestimated, especially when you’re in need of crafting materials. Pomegranates (health), Blue Mushrooms (stamina), Olympian Figs (increase attack power), and Flower Nectar (increase defense) are used to craft potions according to each’s stat effect, again, similar to Breath of the Wild.

It’s not at all surprising that Ubisoft wanted to emulate Nintendo’s crown jewel, and honestly, it works very well. Thankfully, Ubisoft decided not to adopt weapon durability and degradation, a mechanic in Breath of the Wild that I was not too fond about. Nevertheless, I imagine most open-world games in the future to mirror certain mechanics from Zelda, and Ubisoft definitely makes it work in Immortals Fenyx Rising.

Admittedly, I wasn’t expecting much from Immortals Fenyx Rising. After being left disappointed from Ubisoft’s other two main fall titles, I thought Immortals Fenyx Rising would simply be another time killer. Instead, Immortals Fenyx Rising surpassed all of my expectations and truly deserves a place amongst the best of 2020. Deciding to go with a change of tone and cartoony art style, it breathed fresh life into a repetitive setting in Greek Mythology. Even with the endless comedic cues and sassy remarks, there’s still a deep, powerful story about internal struggle and learning how to stand up for yourself. Immortals Fenyx Rising has the perfect balance of being able to tell a compelling, thoughtful, and emotional conquest all while doing it in a fun, thrilling way. Ubisoft struck gold with Immortals Fenyx Rising and I hope this isn’t the last we’ve heard of our brave shield bearer named Fenyx.

Should Levolution Return in the Next Battlefield Game?