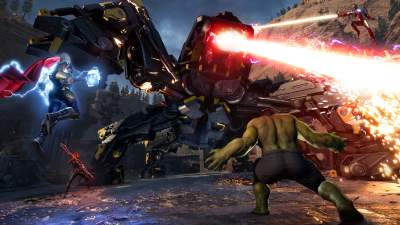 With Crystal Dynamics blowing the lid on everything Marvel’s Avengers, one thing the studio hasn’t touched on is whether we’ll see Raid-like missions where players need to coordinate properly to see it through (like Destiny’s and The Division). Short answer is yes, though the Marvel’s Avengers first Raid won’t be available at launch.

In a recent Reddit AMA (Ask Me Anything), Crystal Dynamics answered quite a number of fan questions and one fan asked about Raids.

Here’s what Crystal Dynamics’ Philippe had to say about it:

The first raid-like content we have (I use that word because we have a cooler word for our game) is going to be very close to launch, like not months close, weeks close but we are finalizing the date now. I think we will showcase it in one of the next news beats so i’m hoping you guys get a preview of it and then get to play it just a few short weeks after. We are also already working on more of them.

As for those wondering how often we’ll see content drops, Philippe shared that while they don’t want to promise anything just yet, they are planing on weekly/monthly and even longer-term content drops.

We are finalizing those details but content will be delivered at varying frequencies, i don’t want to promise anything until its announced but we have ideas for Weekly/Monthly and longer term content drops. We will give you some updates on that soon as its all final and approved.

In other Marvel’s Avengers news, don’t forget that the beta is starting this weekend for those who pre-ordered the game on PS4. Speaking of PS4, Spider-Man has been confirmed for the roster, but will only be available on PlayStation platforms.