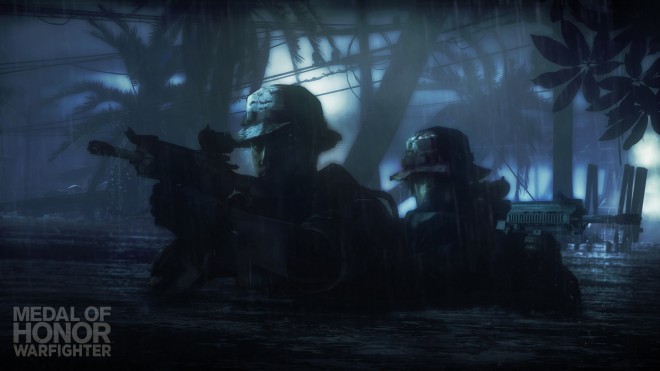 Task Force Mako sets out to a flooded, storm-battered Basilan, Philippines as they infiltrate an Abu Sayyaf terrorist stronghold where a number of hostages are being held.

Here, you’ll see some returning game mechanics like peek-and-lean and the slide technique. Additionally, you’ll see the ability to chip away at cover as well as the use of the dual scope system and other authentic techniques utilized by real-life warfighters.

I was one of the lucky few to get my hands on this exact level in Warfighter during a Medal of Honor community event held at this year’s PAX Prime in Seattle, WA. The particular version we were treated to was played on the Xbox 360 which help up nicely, utilizing the power of the Frostbite 2 engine. Danger Close has some pretty high standards to beat due to the highly regarded single player of Medal of Honor 2010, but so far, things are shaping up nicely and I look forward to another spectacular ride with Preacher and the gang this Fall.

Of course, we also got to spend plenty of time with the multiplayer portion, Global Warfighters, on the PC. Make sure to read up on my full multiplayer impressions right here.

Medal of Honor: Warfighter is available on the PC, Xbox 360 and PS3 October 23.