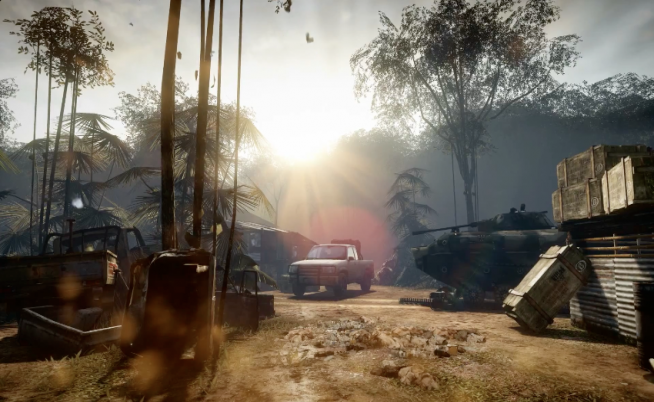 Medal of Honor: Warfighter Multiplayer Trailer Analysis, A Better Look at the HUD, Support Actions and Much More

Early this morning, Danger Close and EA released a brand new trailer for Medal of Honor: Warfighter showing off some intense new multiplayer action in the Tungawan Jungle set in the Philippines. If you missed it, make sure to check it out right here!

You can also catch our previous multiplayer trailer analysis back when the multiplayer was first revealed. It might be a good idea to catch up and lean about some of the recently announced features as well which will not be included in the analysis below.

So, let’s take a look at some of the things we can find in the brand new trailer that Warfighter’s multiplayer will have to offer. As usual, let us know in the comments below if there’s anything we missed so that we can update this piece with your finds. 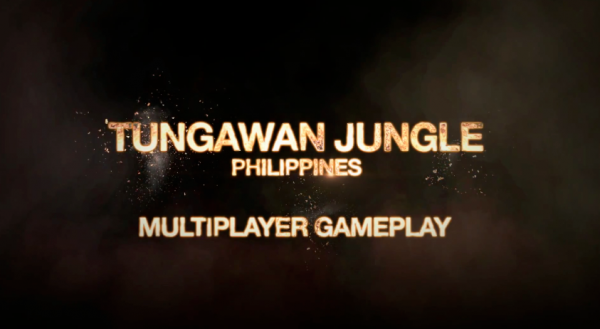 Welcome to the jungle! 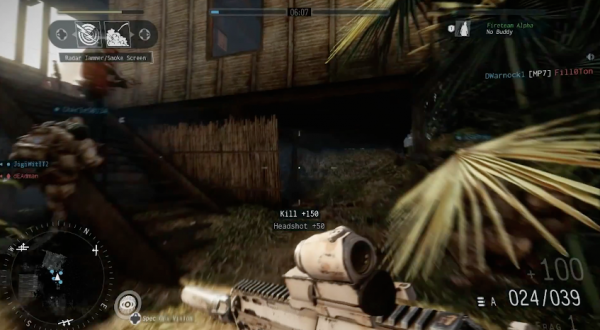 The image above reveals the Medal of Honor: Warfighter multiplayer HUD for the first time in all it’s glory. You can see some of your pretty standard features like your bullet counter at the bottom-right and your mini-map and equipment at the bottom-left. The top left features your selectable support actions, which we learned were class-specific earlier. The top-center seems to house the match score info while the top-right houses your Fire Team information as well as a kill feed. What I particularly like is the clean score counter in the center of the screen. It’s small, dark and unobtrusive. You’ll notice later that this same philosophy applies to the name tags of other players on the field. 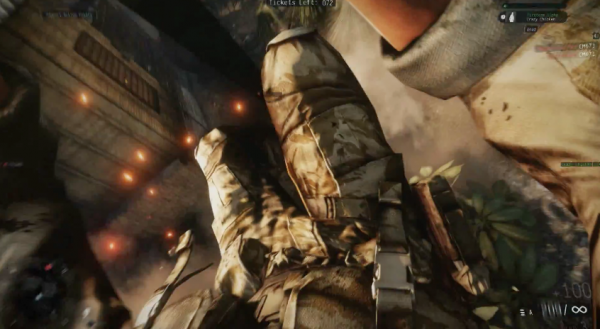 Rappelling into the battlefield 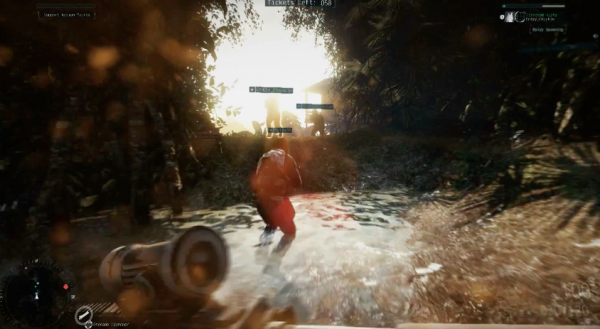 Here, we get another look at some of the Fire Team Buddy mechanics at work. You’ll notice this player’s buddy is highlighted on the screen so that keeping track of his whereabouts comes easy. Interestingly, you can also see that some of the HUD elements seem to fade when the player is running or not shooting. 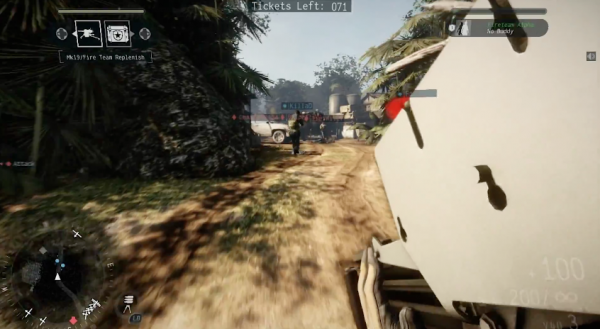 About to set up shop

This player is utilizing one of his class-specific abilities to set up a stationary machine-gun in order to provide suppressive fire for his teammates. This machine-gun in particular carries the ability to fire 40mm grenades as well as. 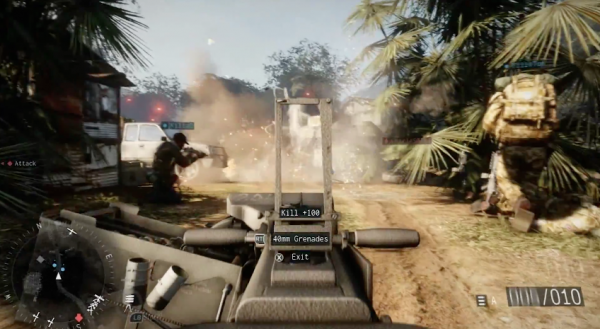 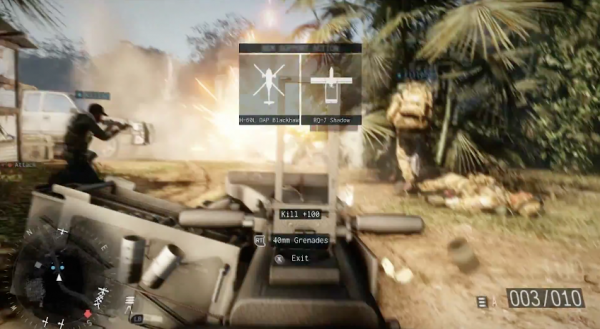 Above, we get a good look at some of the support actions that are available and how you can achieve them. This player obviously got his points by scoring some sweet skills and earned the choice between an attack chopper and a scout aircraft. These choices will transition to the top-left of the HUD shortly after the player is informed of his achievement. 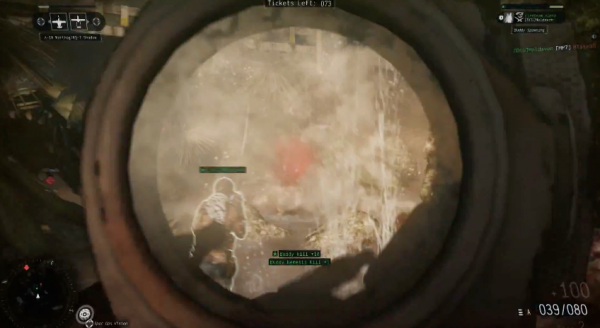 Two interesting bonus points earned here are the Buddy Kill and Buddy Nemesis Kill. This most likely has to do with earning assist points in conjunction with your Fire Team Buddy. 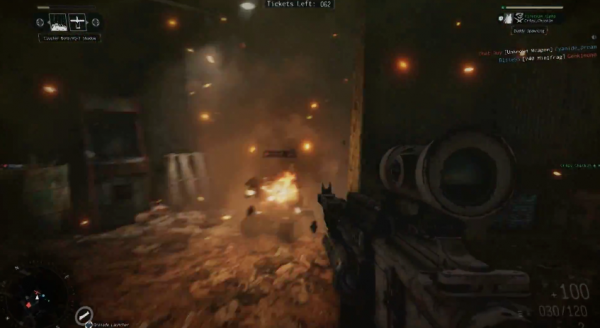 This is the first time, we see a player go head-to-head with a remote turret-mounted bot, available as a support action. Unfortunately, the situation doesn’t end up so well for him. Below, we get a quick look at the death screen. 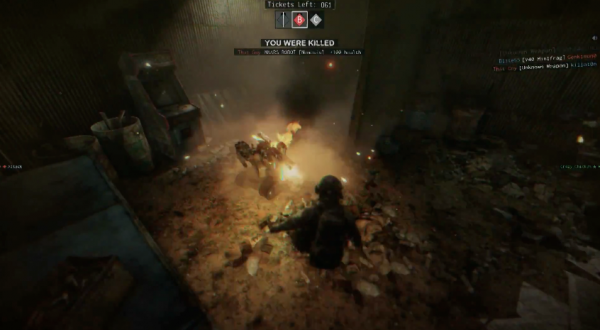 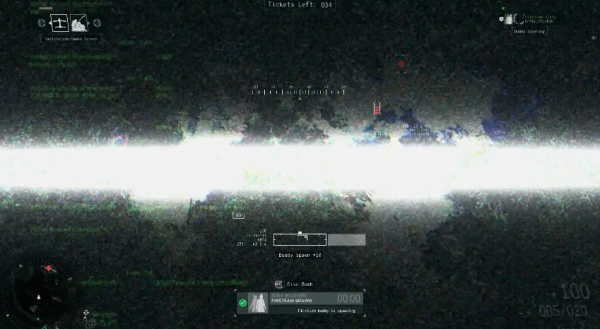 The respawn timer above most likely applies to your Fire Team Buddy. You can notice it here as this player begins to call in a predator missile attack. Below, you can see it from a first-person view as it quickly approaches the battlefield. 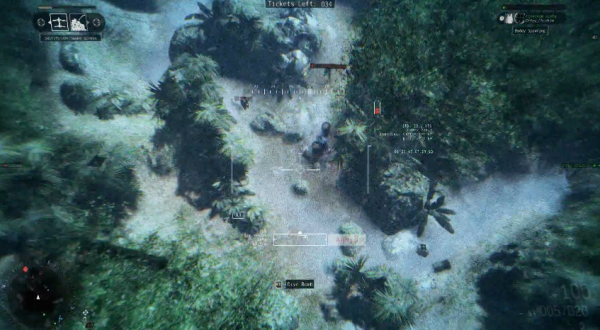 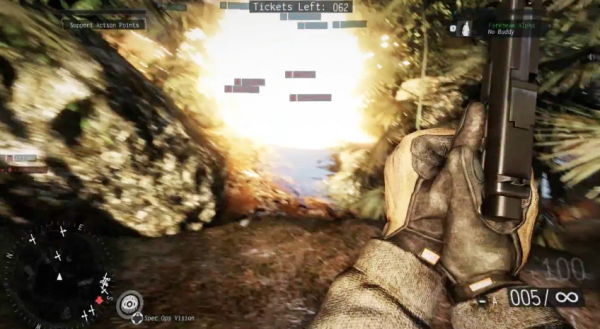 A view to a multi-kill

Catching the view from this soldier as he witnesses the effect of the predator missile attack, you’ll also notice that his bullet counter indicates an infinite supply of bullets for his handgun. 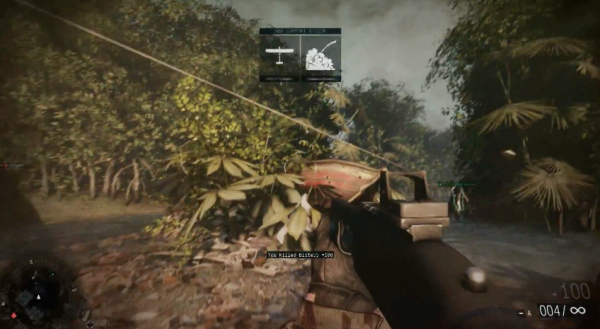 Earning some support actions with a pump-action shotgun 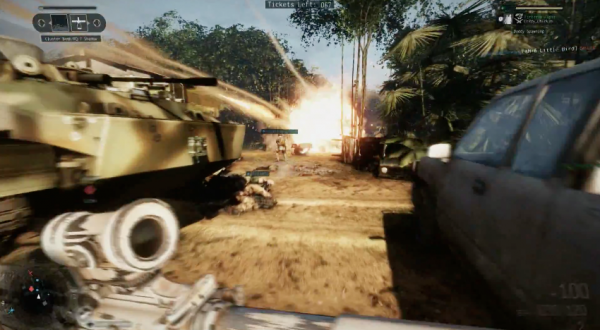 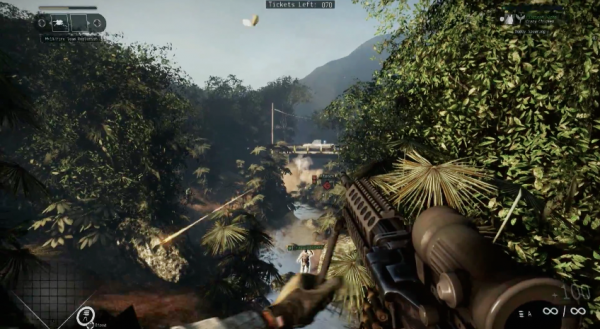 Deploying bipod in an advantageous position

Much like in Battlefield 3, players will be able to deploy their weapon with a bipod if it is attached. This player is setting up on higher ground with his bipod-equipped light machine gun. 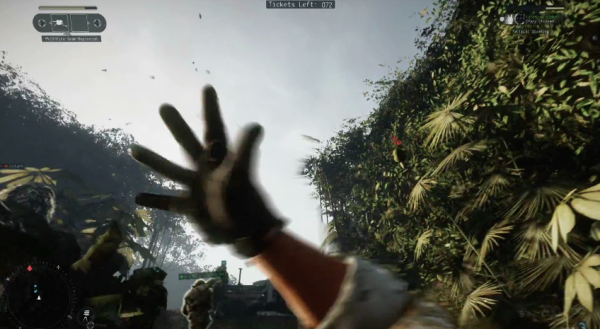 Here, we get a good look at the grenade throwing animation, but what you’ll notice in the image below, is that this soldier is, in fact, throwing three grenades. You can clearly see the three distinct indicators up at the top right in the image below. 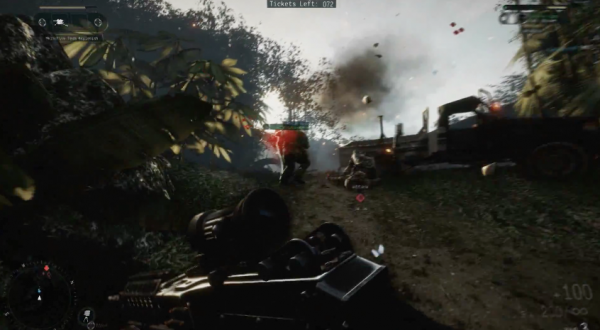 It was made clear that Medal of Honor: Warfighter would feature micro-destruction. It’s not sure, however, what type effect it will have on the gameplay and if this scene below is in-game, or part of a cut scene. Chances are, we’ll be seeing more end-of-match cutscenes as we did in Medal of Honor 2010. 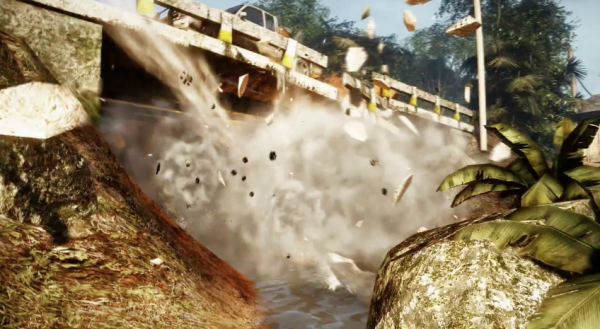 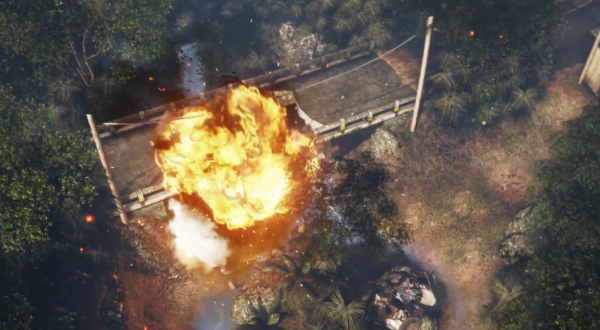