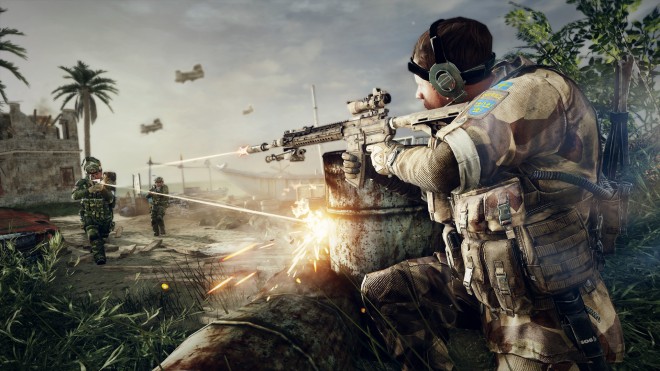 Battlefield 3 vets can look forward to some extra gear and and unlocks when they boot up Medal of Honor: Warfighter this October 23rd.

After making the decision to make Medal of Honor Warfighter about international warfighters, it didn’t take long before we started talking about introducing the Swedish SOG, or rather SSG and SIG as they were known back then.

There were many reasons for this. The SOG are true Tier 1 and up there with the best in terms of both training and equipment. We also traditionally have a lot of Medal of Honor players in Sweden, and we do feel a strong connection with close to a dozen Swedes on the team (myself included) and a huge Battlefield and DICE fan base within the studio.

Releasing the SOG Spec Op soldier early to Battlefield players is our way of giving some love to the faithful shooter fans who are about to experience a new title on the Frostbite 2 engine.

If you’ve played the recent,Medal of Honor: Warfighter Beta on the Xbox 360, you may remember the Spec Ops class as the Canadian JTF-2 Operator with his fast movement and special “Spec Ops Vision.”

Battlefield 3 vets can also look forward to unlocking the Mk18 carbine from Daniel Defense along with the Swedish SOG Spec Ops class. Bergqvist writes that “It also includes a whole bunch of unique Mk18 SOG parts for you to explore in the weapon customization system, as well as a night version of the iconic M90 splinter camouflage. This camo is not exclusive to the Mk18, and can be used on all weapons in Warfighter!”

How many of you Battlefield 3 vets will be giving Medal of Honor: Warfighter a shot this October 23rd?

Call of Duty: Black Ops 2 Is Back in Black With This Brand New Launch Trailer