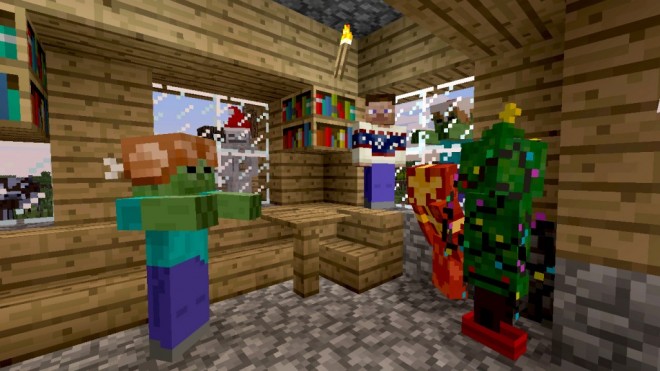 For those currently enjoying playing Minecraft on the Xbox 360, get ready to be greeted with a title update upon starting your copy as of today, just in time for the holiday.

For full details on what title update 7 has added onto the world of Minecraft Xbox 360 Edition, feel free to view the notes here, or by simply scrolling down:

Animal Breeding – feed two of the same animals a particular food and they’ll “kiss” and like magic a little baby animal will appear. Cute!

Brewing – You’ll be able to make Potions! Pull up a Brewing Stand and experiment.

Enchanting– A new process which uses your Experience points to grant special abilities to armour, tools and weapons. You’ll need to craft yourself an Enchantment table to get started.

Mushroom Biome – A new type of land where the humble mushroom is king. New block Mycelium can be found here and Mooshrooms! Try growing yourself a giant mushroom.

Nether Fortresses – a structure that can appear in the Nether, bringing new blocks to the game too. Nether Fortresses are the Nether equivalent of Strongholds. Look out for the Blaze which can found in these new structures, they’ve got a habit of shooting out fire.

Skin animations – Some of your skins will have new animations (optional) to give them a bit more life and personality of their own. It’s something new and something that will be expanded upon as we do future updates, even older skins might get given their own animations as time goes on, so keep a look out for them in the future too. You may also notice that skins can have hats, and stuff.

Since the holidays are upon us, Minecraft Xbox 360 Edition is also expected to release a Festive Pack for the low price of 80 Microsoft Points December 19th. It will add the following:

What feature are you looking forward to the most in the title update?