If you played the Call of Duty: Modern Warfare beta on consoles, you no doubt saw/experienced how the game didn’t tell you if you were lagging or had a bad connection. That will change in the final game, as Infinity Ward has added the Modern Warfare a connection meter for consoles!

This was confirmed by Reddit user sw3ar (apparently, he’s one of the people who managed to snag an early copy), who posted an image of the Modern Warfare options screen, which showed that players can toggle the connection meters. 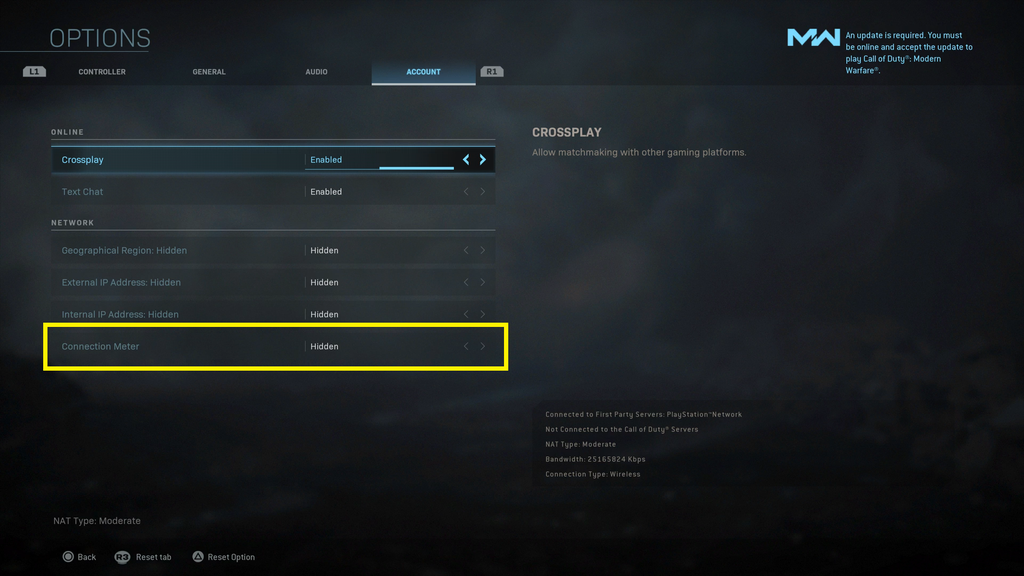 This is definitely a welcome addition, and should help console players determine whether they’re lagging or not in a match.

However, the good news isn’t stopping there. If you’re one of the many people annoyed that when near death, the player’s point-of-view turned black and white, rejoice! We can now confirm that this has been changed, too!

The same Reddit user posted a video of a character’s health went down to 14 from 100, and hos screen didn’t turn black and white, but just got red splotches on the screen, which is par for the course for the franchise. Check out the video of it below.

Once again, this is definitely good news for multiplayer fans. This black and white effect not only was annoying, but it even affected gameplay as well. If your character was close to dying, that black and white effect can make you not see enemies — especially if they’re hiding in a corner or somewhere dark.
In other Modern Warfare news, check out what the main menu looks like here.
Tags: Call of DutyCall of Duty: Modern WarfareInfinity Ward
Previous Post