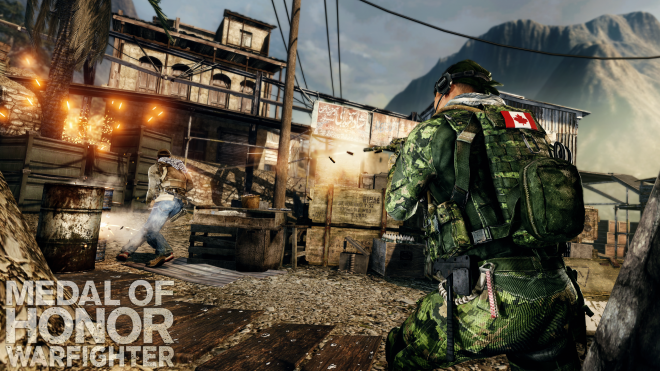 Today, PC players are treated to a brand new Medal of Honor: Warfighter game update as well as the first DLC to hit this military shooter by Danger Close studios.

*Danger Close has stated that “the PC release of the Update and Zero Dark Thirty/The Hunt Map Pack has been temporarily delayed. We’ll update once it’s available.” However, that was a few hours ago.

Darra Gun Market is is based on Pakistan’s flourishing arms bazaar, the largest illegal arms market in the world while Chitral Compound is inspired by a remote, rugged area governed by tribes which won’t allow the Pakistani army to operate.

Zero Dark Thirty will be available on the Xbox LIVE Marketplace and PlayStation Network tomorrow, December 18.

Additionally, EA writes that as “a unique, philanthropic-directed, cross-promotional partnership in the US and Canada,” they will be “donating to the Special Operations Warrior Foundation* $1 from each Zero Dark Thirty Map Pack sold up through March 19, 2014 as part of its overall Project HONOR charitable donation commitment of a minimum of $1 million. Project HONOR is a program created to drive charitable contributions to nonprofit veterans organizations.” So you can feel good about this DLC purchase.

To catch up on the latest patch notes for the recent PC update, as well as the updates that will be going live on the Xbox 360 and PS3 tomorrow, check out these update notes right here.