A day early, it appears that some details for “Mortal Kombat X” have leaked ahead of time, including available platforms and launch time frame. This listing was recently spotted on Amazon UK: 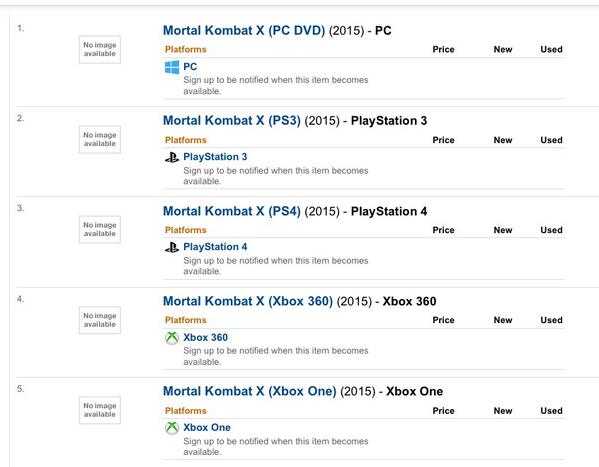 It shouldn’t be too surprising to see a Mortal Kombat X release on the PlayStation 3 and Xbox 360 alongside their successors, considering NetherRealm Studios has been showing much interest in the fighting game community lately, as they still include Mortal Kombat 9 and Injustice: Gods Among Us as a part of their big tournaments.

What is surprising is seeing a PC version of Mortal Kombat X slated for release alongside consoles, as Mortal Kombat 9 took two years to be released on the PC.

@MK_Online @WilliamnCourtne @GamesIt @MKServer We’ve never had that listed at all I’m afraid. Sorry to disappoint you hardcore MKers! AC

The only thing for certain at this time is that we’ll find out “Who’s Next?” tomorrow at 8:00 AM CST, according to Boon. Excited for Mortal Kombat X?