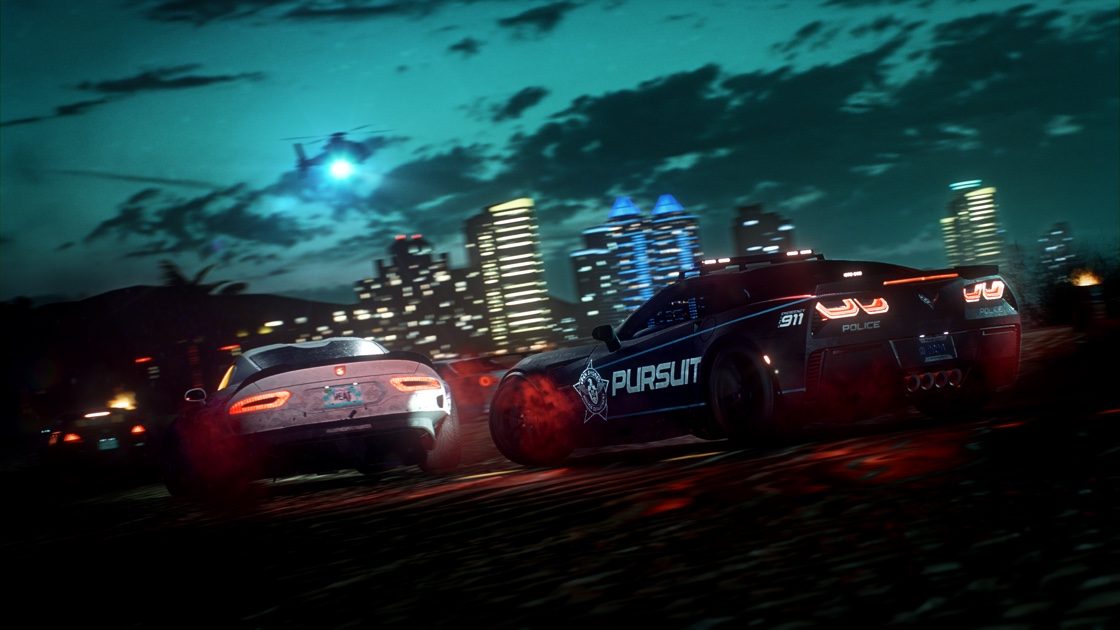 Read on for our full Need for Speed Heat review.

Need for Speed: Heat does feature a narrative-driven story, though I’m not sure it’s a suitable one for the game. You take the role of an unnamed character of your choice, which begins their journey of becoming a reputable racer in Palm City. At least, that’s where it should have gone. Instead right off the gate, the game paints a dark picture that all police officers are complete assholes, and will do anything to abuse their power. It’s a clear take on today’s view of police officers, although instead of dealing with race (because that would be too obvious), they instead decide to make racers the victims of police abuse. Heck, in the opening scene one of the racers whose car crashed into the sea and is lying defensively on the ground nearly gets gunned down by one of these cops, just to send a message. The only thing that saved him was the fact that there were cameras. Honestly, I couldn’t help but roll my eyes, as while I do understand that there are police officers that do act out of line, this clearly isn’t the game to address this in. And being a Need for Speed fan, I think a majority of us can agree that story, in general, is never why we play Need for Speed games in the first place. Although putting their clear intent aside, the game just doesn’t work with the narrative.

Heat really puts a heavy focus on police officers and their dislike for racers. Multiple news broadcasts will highlight the hundreds of thousands of dollars in property damage caused by illegal racing, yet the game throws this view out the door when it comes to day time racing. You see there are two faces to this game, one day and the other night, and they are vastly different from one another.

During the night, police officers are brutal and always on the search for you, however in the day they seemingly ignore you. Palm City will sanction off areas in the city for racing purposes. Think about that for a second. A city that has a major problem with illegal racing that they had to build a dedicated task force to stop them, only to allow these same racers to roam freely without any consequences? That’s not how you fix a problem, that’s how you worsen it. I remember driving 100 mph plus down a street, and a police officer wouldn’t even bother chasing me down. I also rammed into one at low speeds to see how well they would react and still nothing. I’m not sure how this was even overlooked, or if the developers even cared much for it, but that narrative doesn’t get driven to well when the gameplay works against it.

Need for Speed: Heat, in a sense, is two games packaged in one. What I mean by this is that being given the choice to race during the day or night, the gameplay changes drastically. By day, you’ll be racing on closed circuits that are generally smaller courses filled with tight bends. It feels more of a professional take, rather than raw street racing. Because of this style of racing that is offered, players are able to compete for cash to purchase upgrades that they have unlocked. However, certain dealers won’t sell you vehicles or upgrades until you’ve reached a certain street reputation, which is where the night time racing comes in.

Nighttime racing is a whole other beast and my preferred choice. The nightlife offers a more neon-filled, chaotic look at the city as racers are running wild throughout it. Race courses are far bigger and extend throughout the city. There is a track, but it isn’t barricaded off giving you a bit more freedom. Even the cops are more active as they go from being completely dumb, to relentlessly hunting you down. They’re absolutely brutal and unforgiving, though for me, I found this to be a good thing as the last entries severely lacked aggressive police chases. I’ll be honest, it may be annoying for new players or those who prefer the easy difficulty, and maybe Ghost Games will address that later in a balancing patch, but for a long time NFS fans you’ll be delighted by the challenge they offer. And it’s rewarding as the higher the heat you have, the better the multiplayer is for reputation gained, though that is lost if you do happen to get caught. 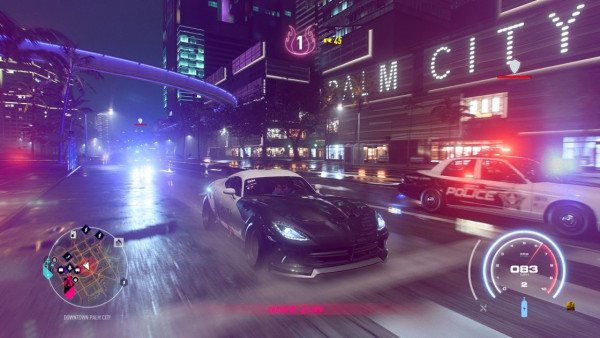 My only complaint, as mentioned before, is they are dumb as heck during the daytime and basically requires you to hit them in order to initiate a chase. It’s such a significant oversight in my opinion, and while I understand what they were trying to do with this design, it just doesn’t work.

Outside of the main racing courses, there are a number of side activities. You can drive around the city hitting speed points, destroying billboards, time events, and much more. I couldn’t help but feel reminded of Burnout Paradise with these side activities as often they would put us in a situation you would never see in real life, such as driving at top speeds on an elevated train track. They were pretty fun, despite some of them being poorly designed.

In terms of gameplay, fans shouldn’t expect it to be as robust as some of the better entries as controls can feel floating along with the physics, and drifting doesn’t take as much skills as I would have liked for it to be. The gameplay is definitely better than what’s been offered prior, so at the very least, it’s a good step in the right direction for the franchise. I’m sure many will enjoy the gameplay that is offered, but it leaves much to crave that other racer today can offer. The physics and collision system can be distracting as objects break at the slightest touch, and vehicle handling can at times feel too floaty. It’s not perfect, but I’ll still take it over some of the other entries we’ve gotten recently.

My favorite games in the Need for Speed franchise have to be the two Underground titles. Since their release, we have never really gotten a Need for Speed title that offered the amount of customization it had. While Heat still lags behind Underground when it comes to the amount of vehicle editing, it does in the least offer more than what the recent entries have. There are several upgrades players can purchase throughout the campaign, along with some fun paint jobs and other cool tweaks. Of course, new vehicles can be bought from dealers and these can also be modified with better engines, tires, almost anything really. The customization is easily my favorite part of the game and I have little complaint around it, if at all any. Fans wanting something deep will be delighted by it, although as mentioned, don’t go in expecting a crazy amount that the Underground series had set.

I think Need for Speed: Heat is a step in the right direction for the franchise to recapture it’s glory days. While it certainly is a fun, enjoyable NFS, you shouldn’t go in expecting it to rank amongst the top. The series has a long road ahead before it can boast itself as something amazing again, though Heat in the least is a good sign of things to come.

Review code provided by the publisher. Reviewed on PS4. You can read MP1st’s review and scoring policy right here.

Remnant From the Ashes Update 1.11 Rolls Out for Fixes