Recent statements from a Treyarch PC developer indicate that an update for the PC version of Black Ops 2 is currently in the works, and that the Ghosts weapon camo will be making its way to mouse and keyboard users “maybe.”

@PCDev recently wrote on Twitter that another PC update for Black Ops 2 is currently “in the works,” though no release time frame was given.

Of course, he also reminds us that the Black Ops 2 Uprising DLC drops May 16 for PC users.

Also, fans inquiring about the recently unveiled Call of Duty: Ghosts weapon camo that was making its way over to Black Ops 2 as a pre-order bonus were told that it might be making it’s way over to the PC “maybe.” As of now, it is only available for Xbox 360 and PlayStation 3 users. 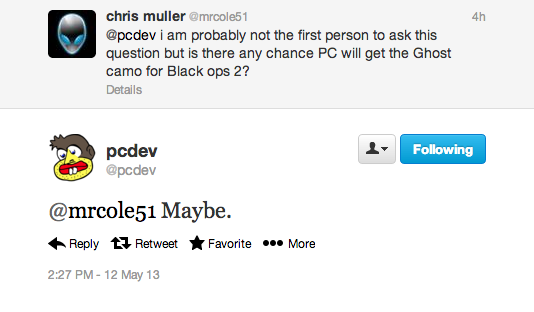 Lastly, he notes that though the recent free to play weekend that took place on Steam has concluded, you can still purchase the title 33% off as part of the Steam Weekend Deal until 10 AM PST Monday morning.

Make sure to keep your eyes on MP1st for the latest Black Ops 2 PC patch notes. We’ll have them up as soon as they become available.

Battlefield 3 DLC Half Off on Xbox Live, Premium 30% Off