Origin is now offering those who’ve pre-ordered Respawn Entertainment’s fast-approaching shooter Titanfall the opportunity to preload the game ahead of its March 11 release. 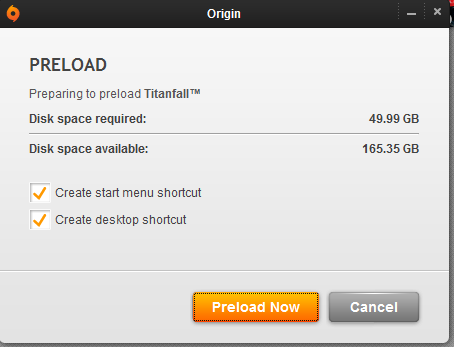 As the image above indicates, the install size weighs in at a hefty 49.99 GB.

As it stands, Xbox One owners will not be able to pre-install Titanfall before its March 11 launch. Originally, the news was posted erroneously on Xbox Wire that Xbox One users would be able to, but it was later removed and confirmed that that would not be the case.

Are you prepared for Titanfall?

Xbox One Twitch Broadcast Overview, Update Your Xbox One Controller

Xbox One Twitch Broadcast Overview, Update Your Xbox One Controller