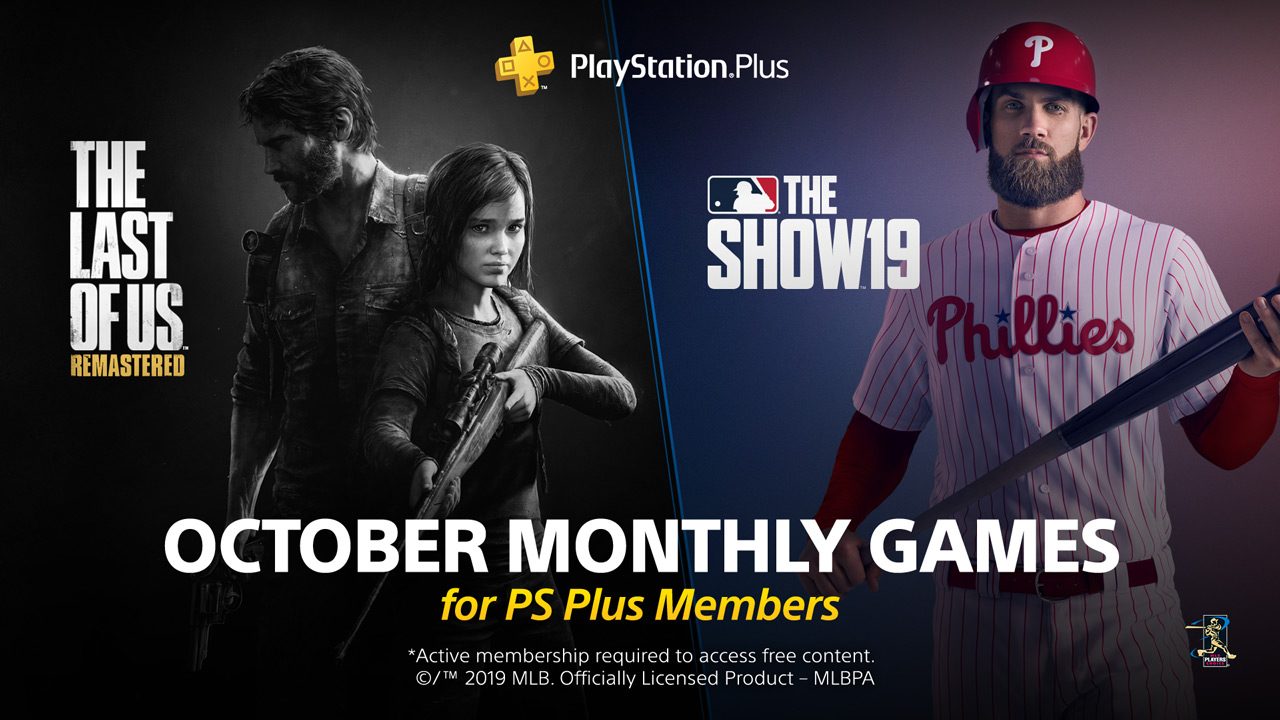 The PlayStation Plus free games for October 2019 were officially announced during the latest State of Play livestream today. What are the titles? The PS Plus free games October 2019 freebies are none other than The Last of Us Remastered and MLB The Show 19 will both be available to download for free for PS Plus members from October 1 through November 4.

With the big reveal for The Last of Us Part II (where the release date and new gameplay was shown) during the same livestream, the hype for the series as a whole has undoubtedly intensified. So having The Last of Us Remastered be available for free for PS Plus members is the perfect choice for this month. It will allow those who’ve played it before to re-experience it once again and let those who missed it now be able to catch up before the sequel comes out early next year.

Here’s what Sony had to say regarding both titles:

The Last of Us 2 Remastered

The Last of Us takes place 20 years after a pandemic has radically changed civilization, where infected humans run wild and survivors kill each other for food, weapons – whatever they can get their hands on. Joel, a violent survivor, is hired to smuggle a 14 year-old girl, Ellie, out of an oppressive military quarantine zone, but what starts as a small job soon transforms into a brutal journey across the U.S.

In The Last of Us: Left Behind, new light is shed on Ellie’s relationship with Riley, her best friend and sometime-mentor from a military boarding school they grew up in together. After disappearing for weeks, Riley returns with a surprising revelation on her whereabouts. Ellie and Riley sneak out of school for the last time, leading to a series of events that will forever change both of their lives.

Swing for the fences in the latest edition of the popular sports franchise MLB The Show 19 from San Diego Studio (SDS) – and play the sport your way. Relive the biggest MLB moments in history with Moments, where you can recreate the most famous plays (Babe Ruth’s called shot anyone?) and showdowns in baseball history. Or, speed-up full seasons with March to October, which lets you play only the biggest and most exciting games to focus on getting your team to the postseason and beyond in less time. You can also create your own player and rise through the MLB ranks with Road to the Show or play against others as baseball’s greatest stars and legends in Diamond Dynasty.

There will be new content dropping in October for MLB The Show 19, which includes the legendary Ted Williams, one of the greatest players of all time. You can also unlock rewards by reliving moments from the 2019 Postseason and the most memorable moments of all time.

To celebrate The Show being on PS Plus for the first time, SDS is also giving away free in-game content for those who download and log into the game between October 1st and October 31st. To get your Show experience started right go redeem and open five free packs. These packs include a Diamond player for your Diamond Dynasty squad and equipment for your created player in Road to the Show!

Additionally, the PS Plus free games for September, Batman: Arkham Knight and Darksiders III, will still be available to download until September 30. Same as always, expect an announcement post with links here on MP1st once the new games are available for download.

The Last of Us 2 Different Editions Revealed, Here’s What’s in Each of Them