As you might have heard, Xbox 360 Elite players will have access to the newly announced maps, Piazza and Liberation, on January 24. Meanwhile, regular Xbox 360 owners will have to wait until March to buy the new maps as part of the first DLC bundle, which means that PS3 and PC non-Elite owners will get the first bundle in April. However, where do PS3 Elite members fall in? We already know that Beachhead studio stated that PS3 Elite subscribers will gain access to the new maps before Xbox 360 regular owners. Now, Robert Bowling promised that “the content comes out first for Xbox Elite Premium members, then shortly after for subscribers on other platforms.” By other platforms, Bowling is referring to PS3 as the PC version of Elite is still in limbo.

The timeline below might help you make sense of it all. 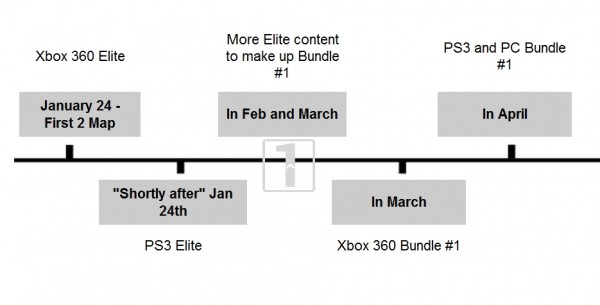 On another note, the two new maps, Piazza and Liberation, will have a separate playlist as expected. Robert Bowling explained that when the DLC is released, players will “receive an in-game notification that new DLC is available for download.” Also, the new DLC will have its own “exclusive playlists.” Bowling assured that the new Liberation and Piazza maps can be played “in Spec Ops Survival mode as well.”