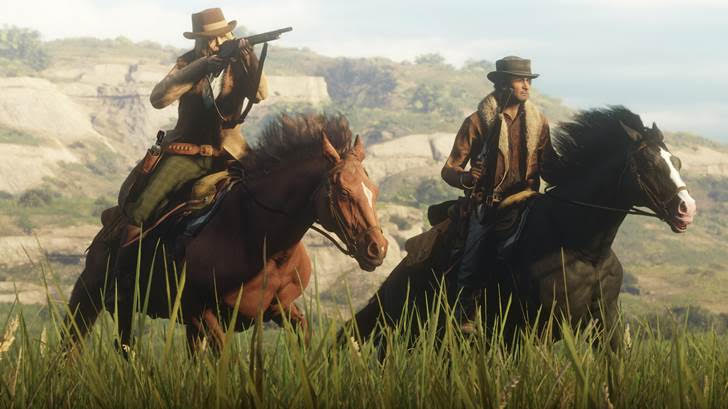 Those busy playing the virtual life of a cowboy in the Red Dead Online beta, rejoice! Rockstar is giving players who log in this weekend (January 25 through January 27) a bonus of five Golden Bars which will be delivered by Tuesday, January 29.

Following the launch of the new Gun Rush mode, we identified a few matchmaking issues, some of which we have addressed with short-term improvements and all of which we are working towards more permanent and proper fixes for in the longer term. The minor improvements should help generate fuller lobbies and we will add more fixes in upcoming title updates. Gun Rush is best experienced with as many competitors as possible, so if you had any issues with smaller lobbies around release, we strongly encourage you to give it another go this weekend as we are already regularly seeing much fuller matches on both PS4 and Xbox One.

For those who haven’t tried it yet, Gun Rush is a tooth and nail, Western style battle-royale fight to the death for up to 32 players that can be played either with Teams or as a Free For All. Players compete in an ever-shrinking battle zone with horses for quick transport (and associated risks). Skirmish for weapons ranging from Mauser Pistols to Repeating Shotguns to Fire Bottles and Dynamite Arrows – as well as for valuable, hard to obtain armor like the headshot-thwarting Ned Kelly Armor to help you survive to the end.

We also updated our official Feedback page to now include dedicated sections for Gun Rush. We of course want to know what you like, don’t like, suggestions for improvements and changes to this and other modes and types of gameplay – so please do keep it coming!

Our teams are currently working on lots of fixes, changes and improvements to the game based on player feedback including the quality of life improvements that we detailed in our last status update: Proximity-Based Player Blips, Parley Changes with quicker access to Feuding, Law and Bounty Improvements to discourage griefing while introducing a new Freeroam dynamic between bounty hunters and criminal rogues, plus Daily Challenges with gold nugget rewards and more. We are currently planning to have these and other improvements to the game included in a Title Update scheduled for release in the coming months – we’ll provide more information as we get closer to the date.

Are you enjoying Gun Rush so far? Don’t forget to log in today to get your free gift!