Xbox One users are beginning to notice surfacing footage of the upcoming Destiny beta running on the platform.

It appears that users, perhaps close to Bungie and who’ve gained early access to the Xbox One beta, are uploading bits and pieces of gameplay. Check it out below:

Destiny’ Xbox One and Xbox 360 beta is set to begin on July 23, nearly one week after its debut on the PlayStation 4 and PlayStation 3.

We’re giving away a couple of codes redeemable on any platform over the weekend and early next week. Get the details here!

It looks like uploads are being removed from YouTube channels. For those curious, we couldn’t notice any differences between the Xbox One and PlayStation 4 versions of the game. We’ll likely see clearer comparisons when both betas officially launch.

Courtesy of user FWCReddit, we’ve also learned that Destiny’s Beta download size on the Xbox One appears to be 12.63 GB. Here’s the image: 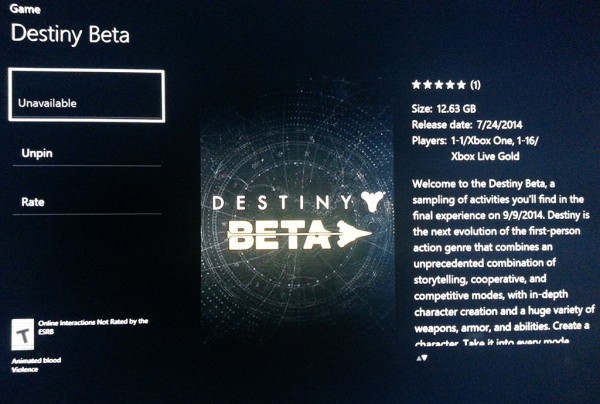 Attention, Guardians, We Have Destiny Beta Codes to Give Away