Capcom’s latest mainline entry in the Resident Evil franchise is here with Resident Evil Village. While the game continues RE7’s first-person viewpoint, does it have the same charm? Will franchise fans embrace the non-zombie enemies revealed in the trailers? What is Chris doing and why does he seem like a bad guy now? Lots of answers, and while we’re not going to spoil anything, we’re going to talk about the most important question of all: is Resident Evil Village worth a buy and a playthrough? Read on for our review.

Trying to move on from the events of Resident Evil 7, Ethan, his Wife Mia, and their newborn daughter Rose find themselves living a new life just outside of a small village located in Romania. Much has happened in the last three years since the family were taken under the protection of Chris Redfield and company, and while things seem all happy on the surface for the family, there are some clear cracks in the relationship due to the previous traumatization the couple went through. 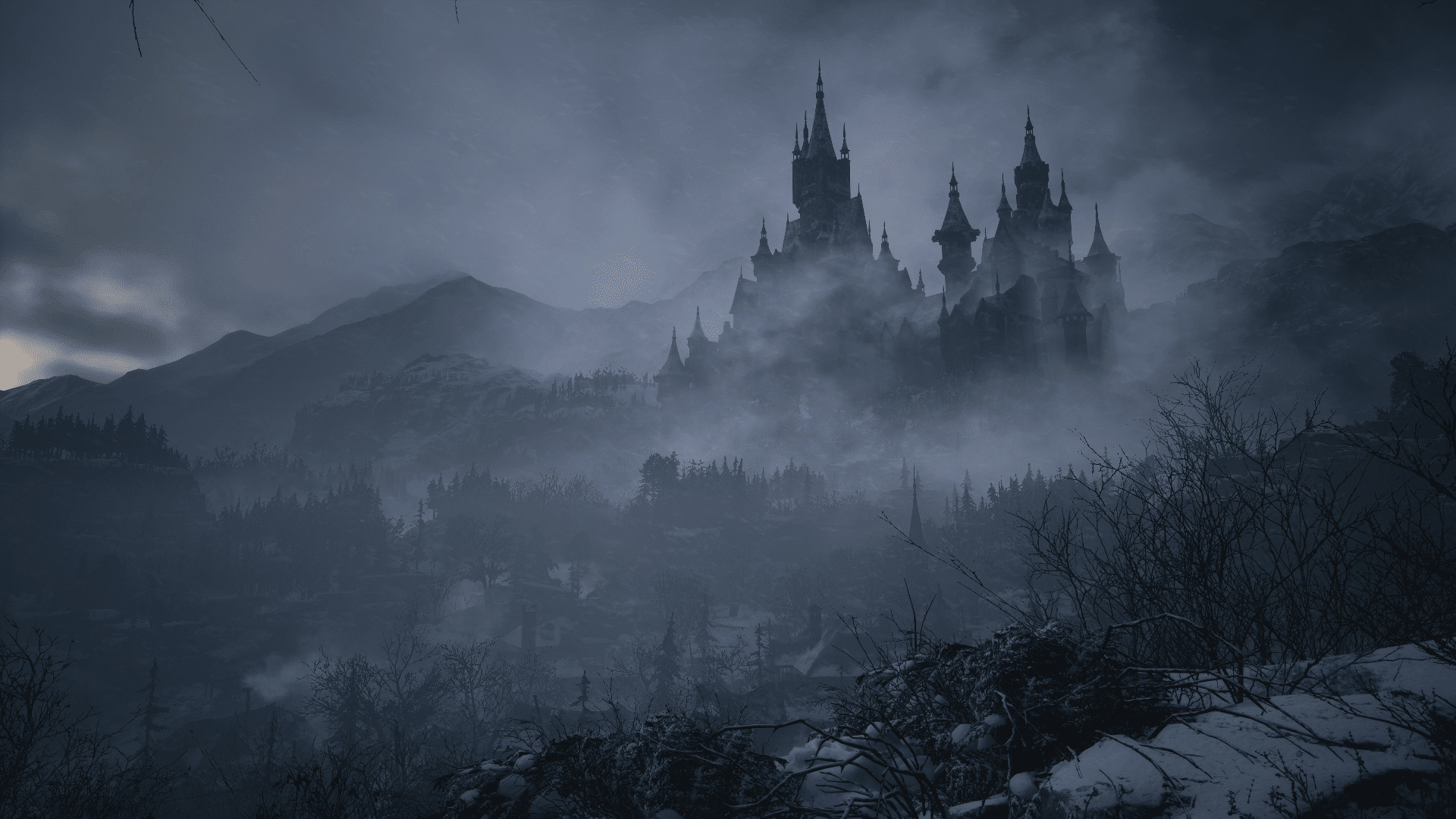 With the couple slowly working on moving forward, all appears to be going right. However, as with all Resident Evil games, things quickly take a turn for the worse as the family finds themselves in the midst of a nightly raid from none other than their protector, Chris Redfield. With Mia shot dead, and Rose taken away, Ethan finds himself in yet another rescue mission, pointing his way to a village close by that has a mysterious castle overlooking it.

Setting off with a more action geared experience than RE7, the RE Village campaign will take players through a grandeur amount of exhilarating set pieces. With the map broken up by four main areas, each controlled by a member of the Dimitrescu, a mysterious family that has long ruled over the area since the medieval times.

Interesting enough, Village seems to be sticking with the family theme that RE7 presented, though it certainly doesn’t hit as well as it’s predecessor. 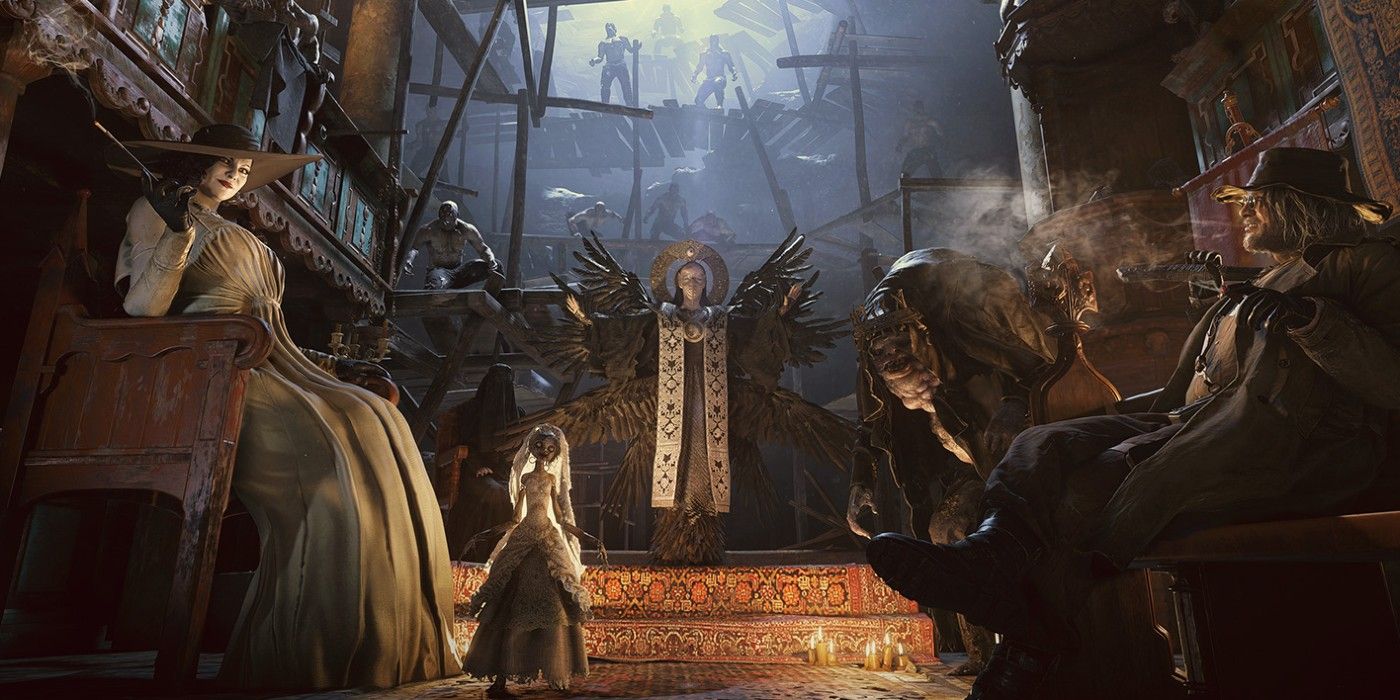 This is perhaps my biggest gripe with Village, as while it more than makes up for it, the villains feel “underwhelmingly” developed in comparison to RE7. Village ret-hreads on the family theme, so naturally there’s a comparison to draw up, and while I’ll admit to not liking RE7 that much (mostly because of the visuals,) I’ll say that the game did an excellent job at building characters and giving you a reason to fear them.

With Jack hunting you throughout the game and the rest of the Baker family lying in wake, there was always tension around every corner. I still remember the feeling of dreadfulness when I saw Marguerite Baker crawling around like spider and hanging from the ceiling, or the multiple instances Jack just appeared out of nowhere, no matter how many times we knocked him down. The villain’s in RE7 truly felt menacing, a real threat in the game’s world.

Village lacks that kind of tension, despite having some terrifying moments. By no means does that make the story bad, far from it, but those expecting some deep character building with constant lingering fear, you’ll probably end up being disappointed by the small amount of time you actually spend with each main villain. And this to me is a damn shame, because each area that houses these bosses are so much fun to play through.

Despite my criticism above, I found the way the bosses were handled in Village to be more entertaining. Capcom leans deeply into each villains personality, giving you some of the series best and note worthy moments. This is perhaps where Village draws it’s biggest contrast to RE7, as noted before, its a more action-based game. Fans can take that as they will, but I certainly feel that the team has knocked it out of the park and provides one of the most entertaining RE game to date because of it.

As for Ethan, the main character, I was a bit surprise by how oblivious he was to everything going on around him. Compared to RE7, he’s a lot more talkative this time around, but he may as well have not been because there is just so little he bothers to question. So much shit happens to Ethan in the game that it became laughable at how he even survived, but of course it was all playing into the game’s story. Even so, there are just some things that happen to him that he doesn’t even bother asking why, and when the time finally comes for an explanation, he’s so out there as to not to believe it himself despite everything. It got a bit annoying because we, as a player, could tell there is something up, but the guy who has his hand literally mauled in half only for a few seconds later using it to push barricades just shrugs it off as if that’s a normal thing to happen in his everyday life. There are far worse things that end up happening, and his response is usually just to ignore it and keep moving.

Still, despite it’s story flaws, Village does ensure to excel in every other department.

I had my doubts when Capcom decided that they wanted to make Resident Evil into a first-person shooter with Resident Evil 7. Known for it’s third-person combat, the change in gameplay was certainly a big one that has had many fans divided since the release. With Village, the studio is once again continuing with the first-person combat, and truthfully, it feels like a great step forward.

The gun play is far more snappier, with aiming and shooting feeling superbly satisfying. With my shotgun at my side, I felt unbeatable, even in moments when I was in dire need of ammunition, which happens quite a lot.

And on top of the improved movement, Village also features the ability to upgrade weapon stats, an old feature that has been absent from the series for some time now. Enemies may feel spongier during your first encounter, but by the time you have earned yourself enough credit to pump into better stats, you’ll find yourself easily popping heads off with just a push of a button. 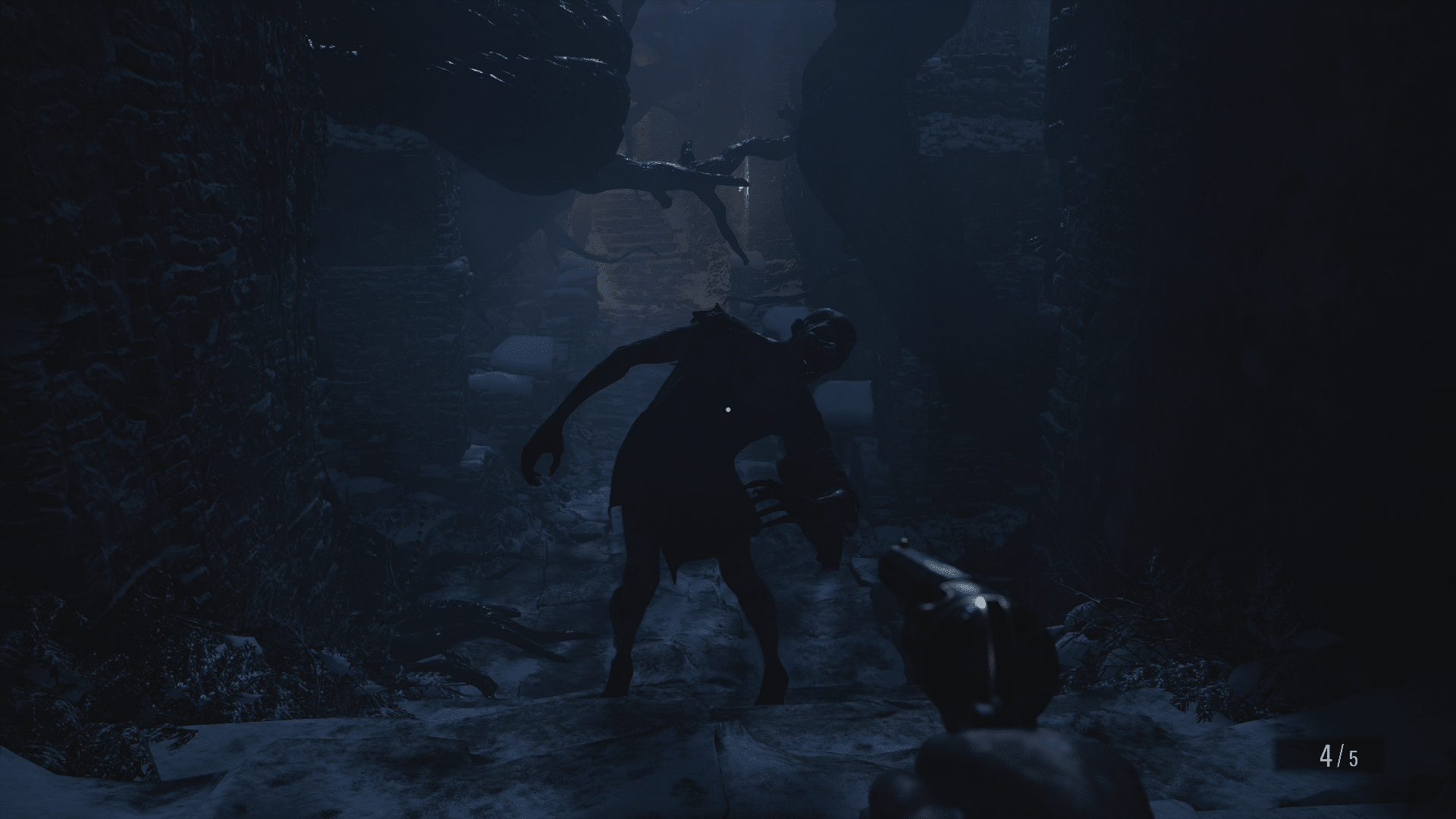 To even add more to our experience, since we are playing on the PS5, there is also the added DualSense feature, which the studio has mastered. The triggers react different for every gun, and while it does take time to get used to compared to other games we have played, the feeling of the triggers kicking back is certainly not one that ever gets old. They’re put to full use in Village, and I highly recommend everyone to play with them turned on.

Of course the combat has always been just part of the fun in Resident Evil, as it wouldn’t be one if it didn’t mean there weren’t any puzzles along the way. These come in plenty and serve up as the main attraction of exploring the world. With many secrets to hide throughout, Village is jammed pack with head twisting puzzles that’ll truly feel challenging the first time playing.

There is plenty to backtrack as well as the game also offers special hunts where you need to track and kill certain animals in order to earn permanent stat boosters from Duke the merchant. There are even hidden chests that have huge rewards, and given that the game is rather short, the added replay value is certainly a welcome one.

Compare to past RE games, Village has a huge feeling of freedom with it’s large hub world. It helps that it’s also a very interesting, and beautiful world to explore.

A Picture Under the Full Moon

From a dusk =-gloomed village filled with nightmarish fiends, to a castle with never-ending awes of beauty, Village embalms itself in a thick richness of variety like no other Resident Evil before it.

Taking huge inspiration from Resident Evil 4, and combining it with the gorgeous 1800’s Victorian aesthetics, there is a lot to love about the world of Village.  Upon our venture, we were quickly swept away by the visual showcase, with every scene beautifully crafted. I thought the two Resident Evil Remakes were graphical galore of what the Resident Evil Engine could do before, but after playing Village it’s easy to see just how much more the studio can push.

I was a bit worried about the game being a cross-gen title, but that feeling quickly diminished within the opening act. The character models in particular are far better detailed, and look more realistic, a huge complaint I had with RE7, and even for the remakes. I was absolutely blown away, especially with Chris Redfield’s newer model which suits him a whole lot more than his RE7 one.

Environments however are the real draw for Village as they are all well designed, and filled with so much details. It all blends in so beautifully, and the lighting work is some of the best I’ve seen in a game.

It’s hard not to stop and just take everything in for a perfect snap shot. 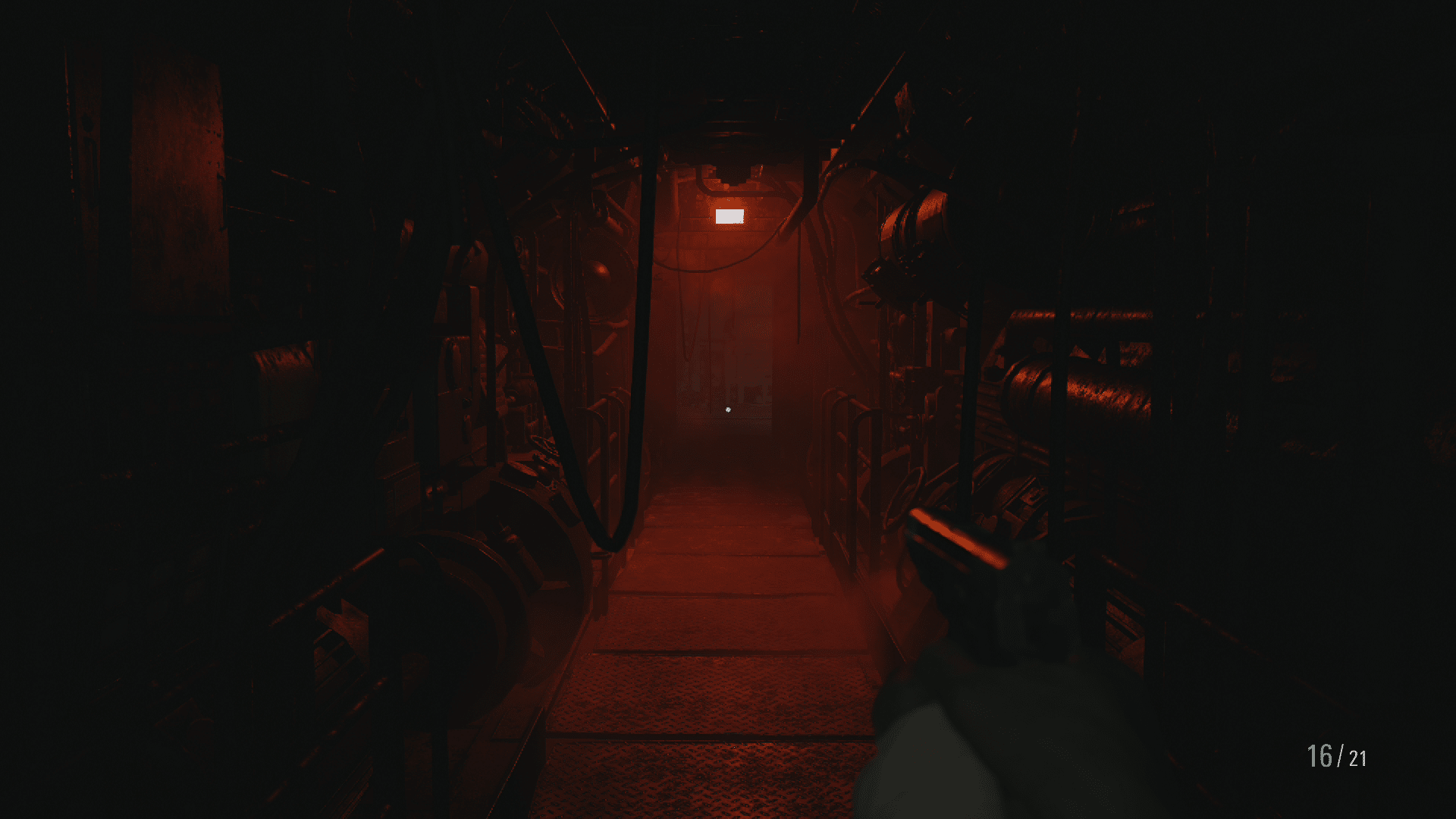 There is so much I want to show in this review, and despite not being under an embargo for it, it’s really something everyone should experience themselves.

Now this being a cross-gen title, the big question is how well does it perform across all the platforms? Our lead platform was the PS5, which performance is superbly smooth in the frame-rate department, especially with ray-tracing running. It was hard to take notice to any of the dips we experienced, as it mostly part felt like a locked 60fps. Still, given that the system is hard to get it would be a tragedy if the last-gen versions didn’t offer a playable experience, and thankfully they do.

Playing on both the base PS4 and PS4 Pro, Resident Evil Village takes a bit of a dive in the visual department, but makes up with a smooth experience. On hardware that is over 7 years old now, that’s pretty impressive all things considering how well it fits next-gen consoles. No short stick is drawn here for last gen owners, which is great because the world of Village offers so much when it comes to it’s technical feats. It certainly will be a title that gets talked for years to come.

While I don’t believe that Village has the greatest story for a Resident Evil game, everything else about it helps makes it standout as one of the more worthier titles. With stellar combat, and a world that is easy to get lost in with it’s beauty, Village feels like a huge step for the franchise. I am a bit bum that there is no VR support like RE7, but this did allow the team to really give the game their all on a technical level. It feels like a true next-gen experience, even on the older systems. Plenty to love about Village, and with multiple playthroughs under my belt, I just don’t see how anyone can skip out on this gem. To me, this feels like the evolutionary step that Resident Evil 2 took from the first game, only for Resident Evil 7. The first-person perspective is proven, and here to stay for the long haul.