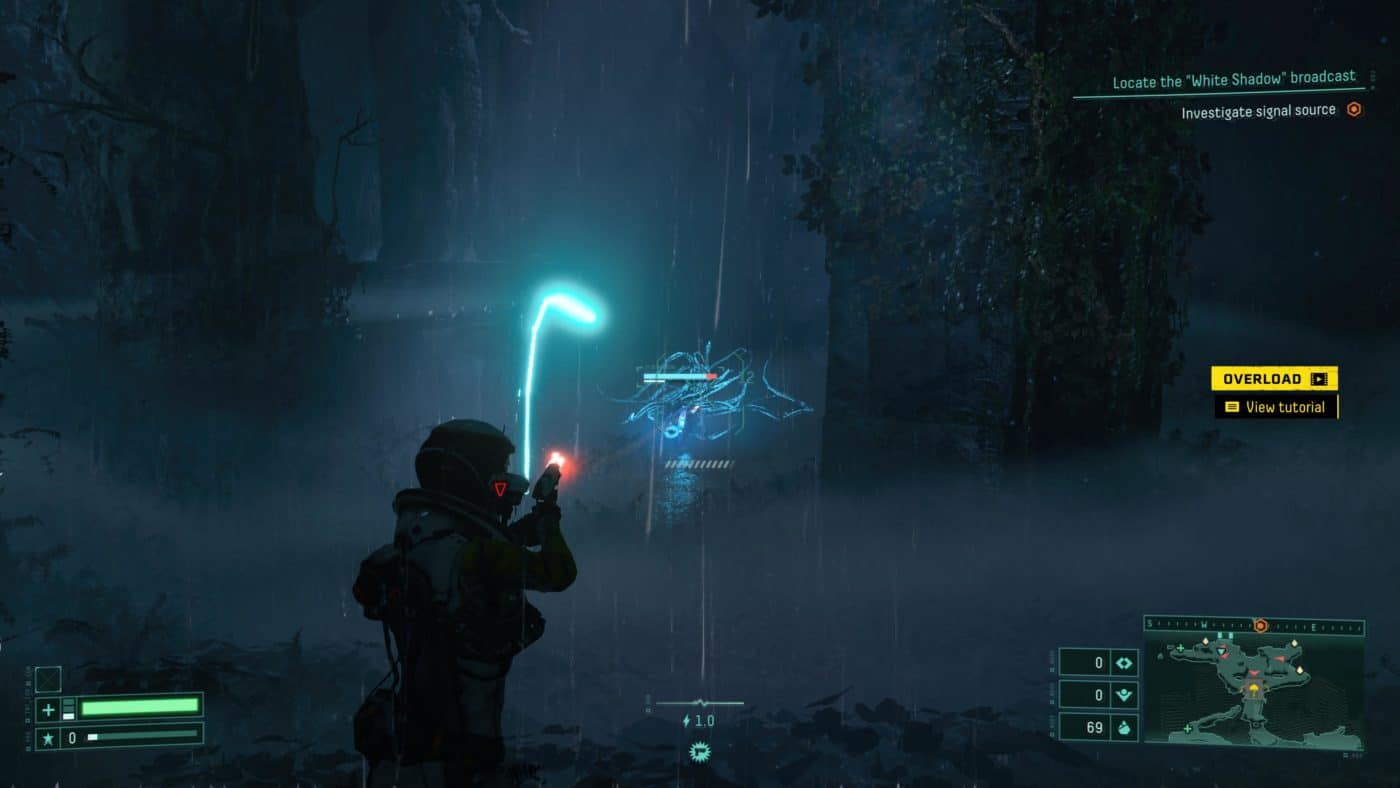 As a child I spent an absurd amount of time (and money) in arcades. On trips to the mall with my mom, she would send me off with a handful of quarters and I would spend the entire trip there – out of my mom’s hair – sinking quarter after quarter into my favorite cabinets trying to get better and better at the games. Dying didn’t mean much because I had extra lives and more quarters. It’s no secret that the way arcade machines made money was through being difficult and addictive enough to get people like me to keep putting money into the machine just to get a little further than we did the time before, and it’s this central concept that is the essence of Housemarque’s first AAA title and PS5 exclusive, Returnal.

I’m Still Right Here, Where I Always Was

Drawn to a strange yet familiar signal coming from the alien planet, Atropos, ASTRA pilot Selene attempts to land on the planet and crashes. While exploring the planet in hopes of finding the source of the signal, Selene comes across her own corpse. Shocked yet undeterred, Selene heads further into the surface of the planet and dies. She awakens back at the crash site, and soon learns that death is not the end for her, and she keeps returning back to the crash site every time she dies. She also discovers that the planet changes every time she returns.

Full disclosure, Returnal is the first “roguelite” I’ve ever played. While I would have loved this concept as a kid who had infinite amount of time, as an adult, the notion of losing progress and doing it all over again wasn’t appealing. However, Returnal just looked too good to pass up. And I’m glad I didn’t because Returnal, with its pitch perfect combat and mobility, expertly realized risk vs reward set of systems, is easily one of the best games I’ve ever played on a purely gameplay level. However there are some unfortunate caveats that at the time of writing this, hurt the overall experience.

In all honesty, the story was the least interesting part of Returnal for me. It’s well written, well acted, and well presented. It just didn’t do it for me, as these moments are dragged out and interrupt the fast pace of the game, and it was pretty clear what happened relatively early as well. They aren’t nearly frequent enough to seriously hamper the whole experience but it’s worth mentioning that every time I just wanted to get back to the action. 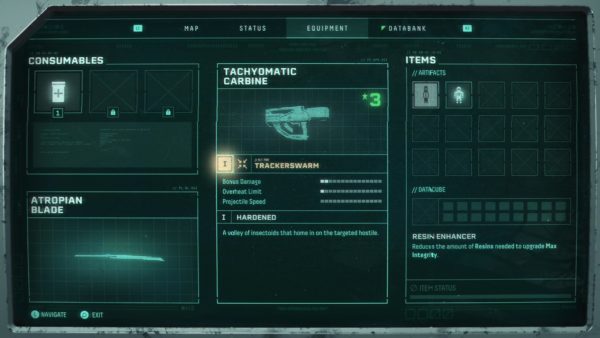 All You Need Is Kill

What hooked me on Returnal was the impeccable controls. Combat is fast, responsive and hectic, but almost always manageable. Enemies have all manner of attacks ranging from beautiful but deadly projectiles to close range lunge attacks, both do incredible damage which means mobility is key to surviving, sometimes even more so than what weapons you have. Dashing gives you invincibility frames so you won’t take damage dashing through an attack. Many times I used this to reposition myself to get around an enemy and either melee attack them or simply empty my gun into them as the adjusted to my maneuver. Once killed enemies exploded in glorious fashion leaving Obolites to be collected; even then I had to move fast or they would disappear.

The nature of roguelites and Returnal specifically is that when you die, you will have to explore the maps (biomes) again. Returnal uses a certain degree of procedural generation for the biomes which not only shuffles the rooms, and the order you progress through them but also the items you will find within. This means success is greatly tied to randomness and luck. A few runs had everything going in my favor while other times nothing would. A large chunk of my 13 total deaths (including the time I was supposed to die towards the beginning) was due to being extremely unlucky with what I was finding in those runs and the enemies I had encountered. It can be extremely frustrating because even the most nimble of players can’t always overcome what is essentially a bad roll of the dice. Still, the gameplay loop was so addictive I would keep pushing on, hoping that the next cycle would swing back around in my favor. Oddly enough, I only died on two of the five bosses and it was only once each. Thankfully, you can run through a previously completed biome again and again without having to fight the boss each time. This is a great way to build up momentum in your cycle so you can go to the next boss with a pretty healthy build. 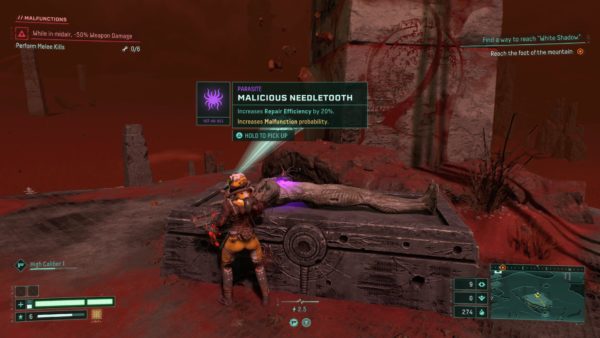 Since in Returnal I am perpetually at the mercy of RNGeesus, I experimented with different weapons until I found one I loved – the Electropylon Driver. This thing shreds enemy health bars. It fires pretty fast and shoots electric pylons that can be tethered together and create an electric web that does damage over time. What I would do is shoot two or three into an enemy, and usually that would be enough to watch their health bar quickly dwindle till they were dead. For larger enemies, I would shoot them and the ground creating an area where they would be essentially trapped for a moment while a chunk of their health bar got eaten away. And this thing absolutely destroys bosses. It’s more of a defensive weapon for sure, but it’s the one I found the absolute most success with. Your mileage will vary depending on how you like to play.

Every weapon has certain traits specific to each weapon that can be unlocked by getting kills with that weapon while other traits are shared. Not every trait will be available based on the random nature of the game and each run, so you will need to unlock them as you repeat loops. Some of these traits I have never even seen on my runs so it will definitely vary from player to player. The shared traits will be unlocked across all of the weapons.

For Returnal, not all progress is lost. You will get key items that stay with you on each cycle. Namely items and abilities that allow you to access previously unreachable areas of each map such as a grappling hook that you can use to catapult yourself across chasms or pull yourself up to specific ledges. Additionally there is a currency called “ether” that stays with you as well, and can be used to cleanse malignant chests, and even activate a device in the current biome where I could respawn with all of the upgrades I acquired on my current run. Ether can be also be traded for the temporary currency, Obolite or to get items from a device at the crash site.

What you don’t keep are your health upgrades, artifacts that give buffs, healing items, weapon proficiency and for that matter, your weapons save for the starting pistol. Every weapon has certain traits specific to each weapon that can be unlocked by getting kills with that weapon while other traits are shared. Not every trait will be available based on the random nature of the game and each run, so you will need to unlock them as you repeat loops. Some of these traits I have never even seen on my runs so it will definitely vary from player to player. The shared traits will be unlocked across all of the weapons. 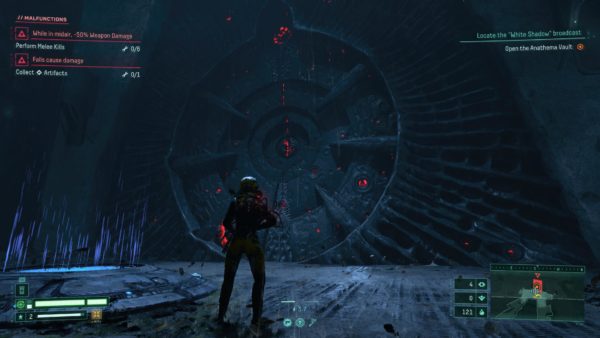 Plan in the Moment

As I mentioned before, Returnal risk vs reward is integral to success. Since everything is random, I would find artifacts in the game that gave me bonuses to my weapon damage, grant more health when healing, and even items that will revive you on death so you get a second chance a la Sekiro. The risk comes from parasites and malfunctions. The parasites give both a pro and a con. For example, there is a a parasite that will also resurrect you on death but the con is your integrity (health) will take a massive reduction when this happens. Another can be that it will give you more time to collect Obolites that enemies drop upon death but will also drastically slow down your dash and melee cool downs. There are way too many permutations to list them all here but I found myself quickly deciding if the bonus I would get from a parasite was worth the hit I would take somewhere else.

Malfunctions are another beast entirely. Basically these are negative affects you get from interacting with malignant items. Sure you might get a sweet bonus or weapon but you can also get a debuff that lowers your healing capacity by 30%. Once you have a malfunction (keep in mind, only two malfunctions at a time can be active so interacting with malignant items after that can destroy a random artifact in lieu of getting another malfunction) you will need to fulfill a requirement that is listed underneath what the malfunction does. These can be as simple as using a consumable or has hard as using a key which may or may not spawn on in the current cycle/biome for a while). Learning to manage these malfunctions and deciding if they’re worth the risk or not will greatly increase the chances of success.

More Than a Feeling

It can’t be understated how greatly Returnal takes advantage of PS5’s features. The 3D audio works incredibly well on headphones, which saved by bacon many times by giving me a near precise location of where an enemy was and how close they were. It also helps with collectables as they each give off a sound when you’re in proximity. Coupled with the music score that is both haunting and intense, sometimes simultaneously, the auditory experience is fantastic. 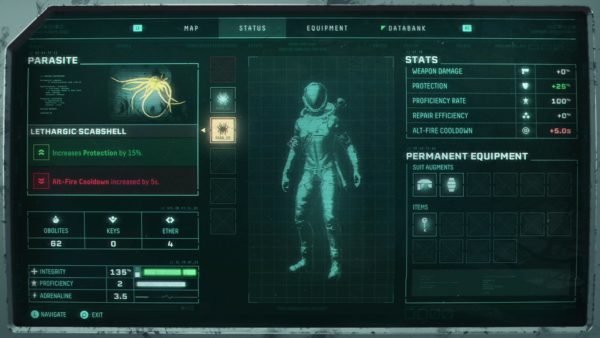 Unfortunately, for all that Returnal does extremely well, there are some nagging issues that brought the experience down for me a bit. Namely the bugs. By now many already know of them but for the uninitiated, Returnal suffers from some bugs that will do anything from forcing you to have to restart your cycle to – in some cases – wipe your entire save meaning you will have to do everything again. That means all of your permanent upgrades, as few as they are, will be lost. You’ll have to fight every boss again, etc. Thankfully I didn’t experience the save file loss, but I did get stuck in two rooms with no way out and both were on lengthy runs which means I wasted hours of my time through no fault of my own. For a game that is so polished in other areas, these bugs really do put a damper on things.

Bugs can be patched and my subjective dislike of the pace killing story sequences notwithstanding, Returnal is a great game and showcase for the PS5. It reminds me of what I have aways loved about video games; gameplay that hooks you and keeps you invested in that “one more quarter” kind of way that so relatively few games do these days. Housemarque largely succeeds with their first AAA outing in a big way and have released what I feel is the first true Game of the Year contender for 2021.