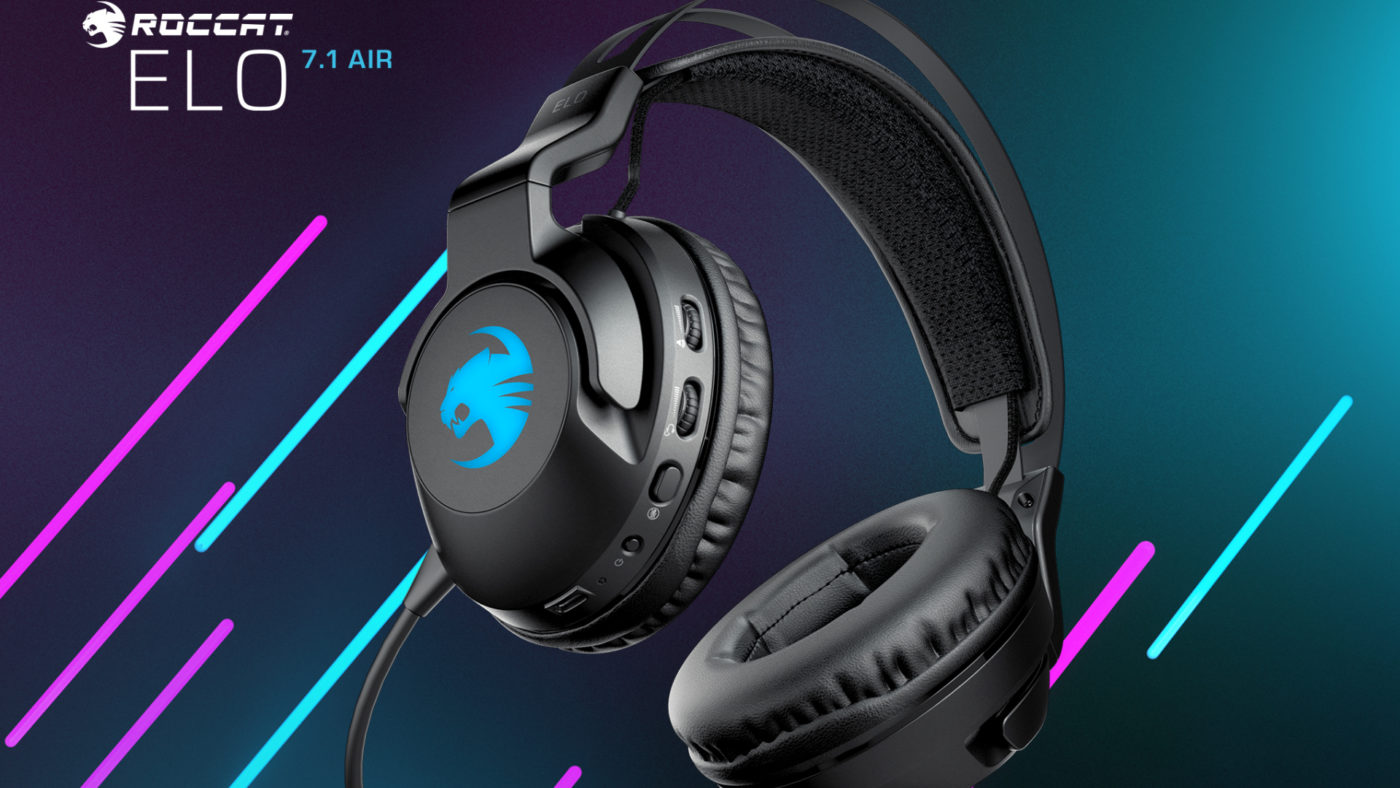 A little over a year ago, Turtle Beach made it’s purchase of long time PC peripherals maker, Roccat. A rather big purchase, one that served to further expand the portfolio of products under the Turtles Beach name. An exciting announcement for fans of either companies, and with Roccat working on their flagship line of headset, the ELO, we now have a headset that takes best of both worlds, all at an affordable price. Head on to our Roccat ELO 7.1 Air review to see what we think of this piece of gaming gear.

While the visual style of the Roccat Elo 7.1 Air is rather basic compared to a lot of other gaming headset, the overall build quality is pretty impressive. Featuring steel framing with an elastic padded banding for comfort, the Roccat Elo 7.1 Air offers a high level of durability that certainly doesn’t feel cheap. Compared to headsets that opt for a full plastic build, the metallic exterior headband offers far more flexibility so that it may fit any head shape, with the interior banding supplying comfort for the wearers.

The speakers are enclosed in a nicely matted plastic, with two joints that offer inner tilting and 90 degree rotation. As for their padding they are laced with some leather like material with the inner cushioning being some light memory foam. They won’t provide a closed acoustic environment, but they do provide a snug and comfortable fit. And considering that it comes packed with a chargeable battery that can hold up to 24-hours of life, being comfortable is most definitely something you’ll want. 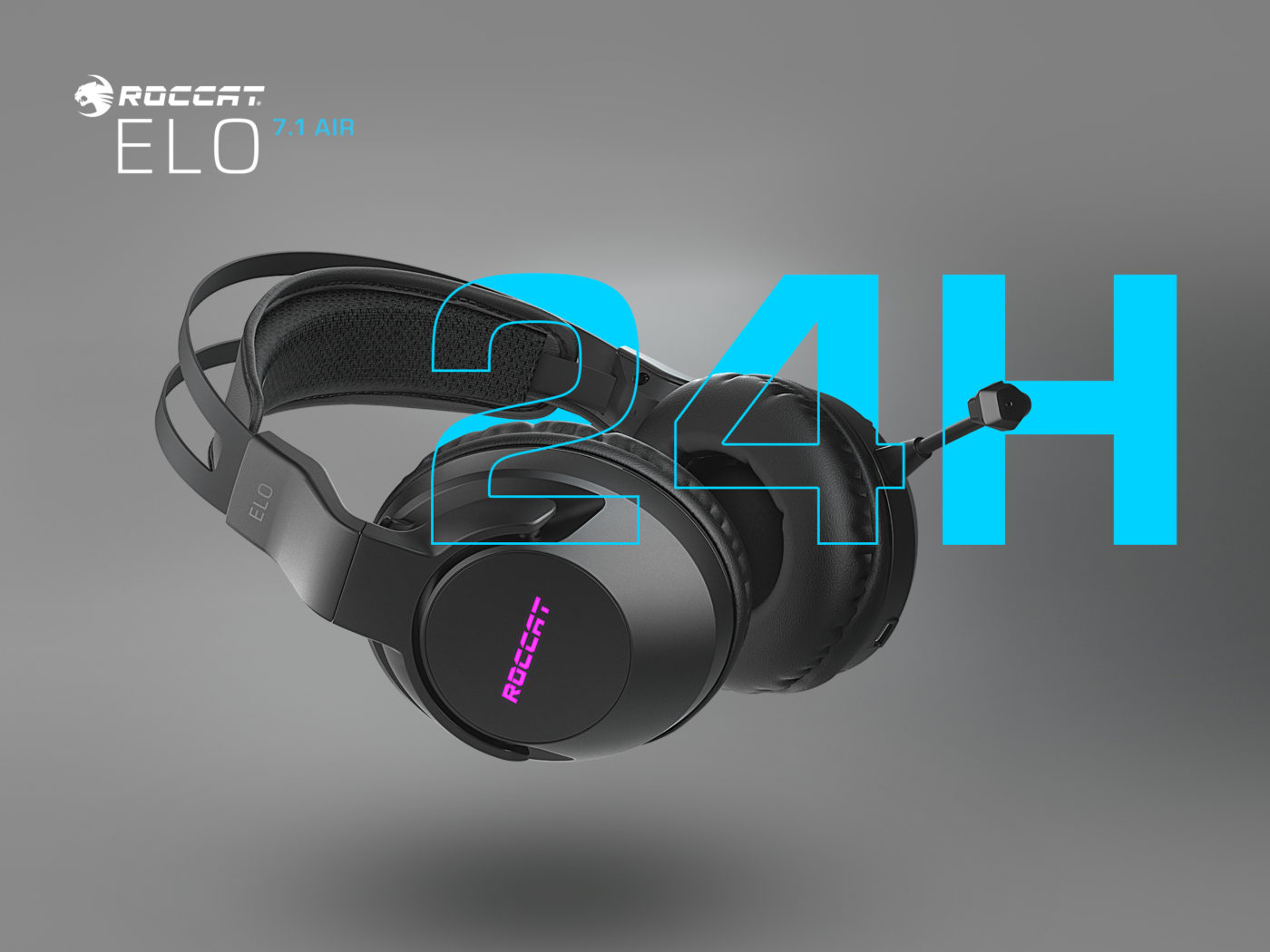 Moving on, we have my favorite design choice and that’s the removable microphone. Yep, if you aren’t one to fancy having a microphone on the headset and prefer a more cleaner look, you can detach the microphone with no hassle whatsoever. You’ll also be glad to know that the microphone is fully adjustable, meaning you can mold it in any direction that you. As for the other adjustments such as game volume, chat, on/off, those are tucked on the left earphone with nice and easy access.

Clarity Traveling to You

Of course, as with all gaming headsets the big thing most of you are probably wondering is, how good is the sound? Well it’s very good, in fact I’d go as far to say it has some of the best sounds I’ve heard to come out of a wireless gaming headset. While the clarity is pretty comparable to those other sets, it’s how the ELO delivers it to you that is rather special. 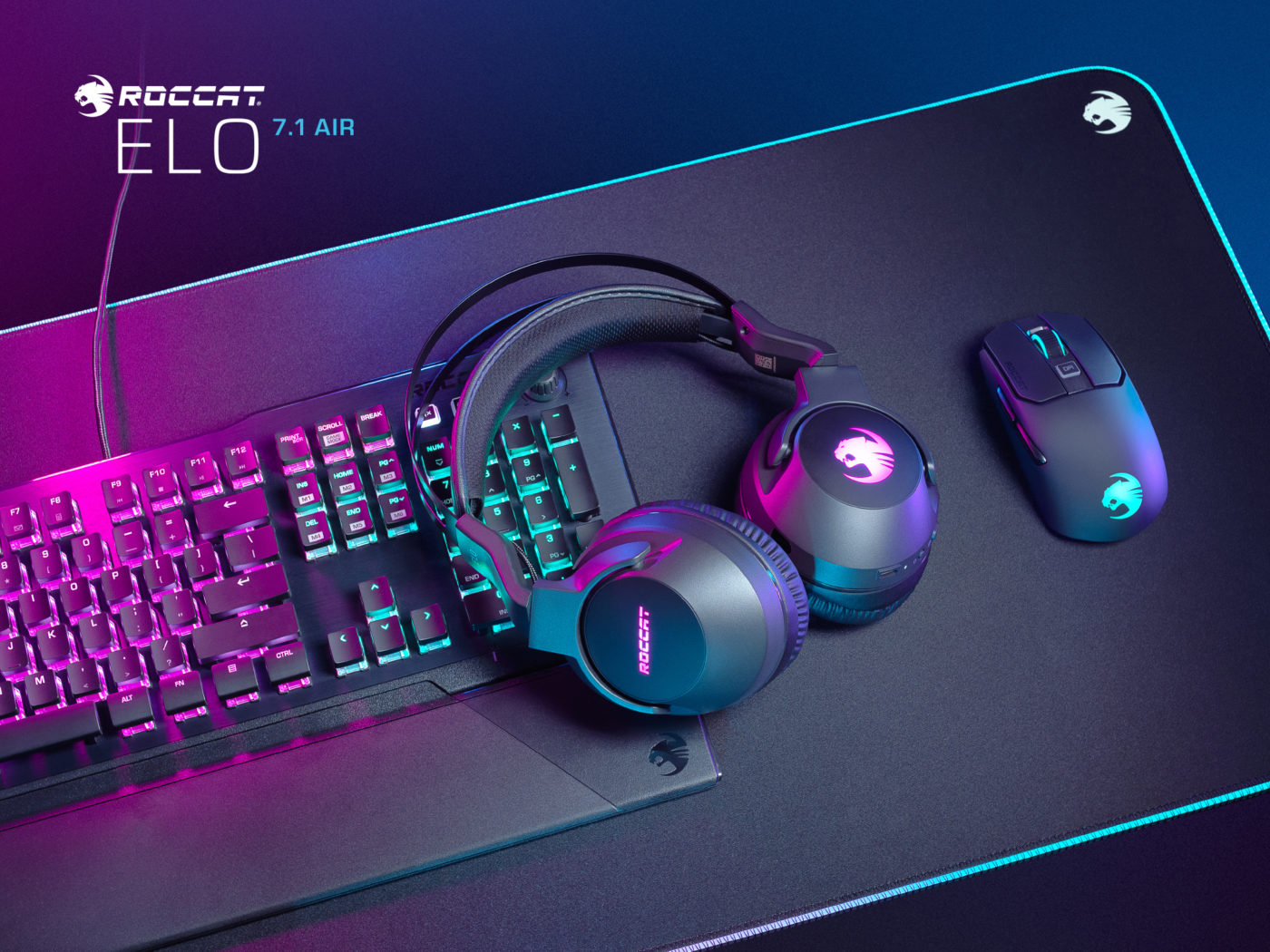 Testing out the ELO with it’s base 7.1 settings on a game like Call of Duty, I noticed sounds felt more amplified with a better strong sense of focus added to them. Being able to listen to a sound such as footsteps and pinpoint exactly where it was coming from, all while gunshots and explosives were going off was surprisingly clear, and in a very different way. We’ve tested some amazing headsets with equally fantastic speakers before, but the ones on the ELO seemed more geared to providing gamers with a competitive edge.

As I played and listen, I could see myself improving in my overall reaction times as new sounds that I couldn’t hear before were now being focused on. Adding to the fact that these are wireless and I’m sitting 15-20ft away from my screen, the quality is surprisingly clear with no indication whatsoever of the quality dropping. What’s more, as mentioned before, this was just using the default 7.1 set-up as the headset comes packed with it’s own dedicated software.

The Power of Swarm

The big advantage of having a wireless or USB connection type of headset (versus 3.5mm), is that usually the manufacturer has their own dedicated PC software that is built specifically to unlock said device full potential. In this case, the ROCCAT ELO 7.1 Air is fully supported by the ROCCAT Swarm app. 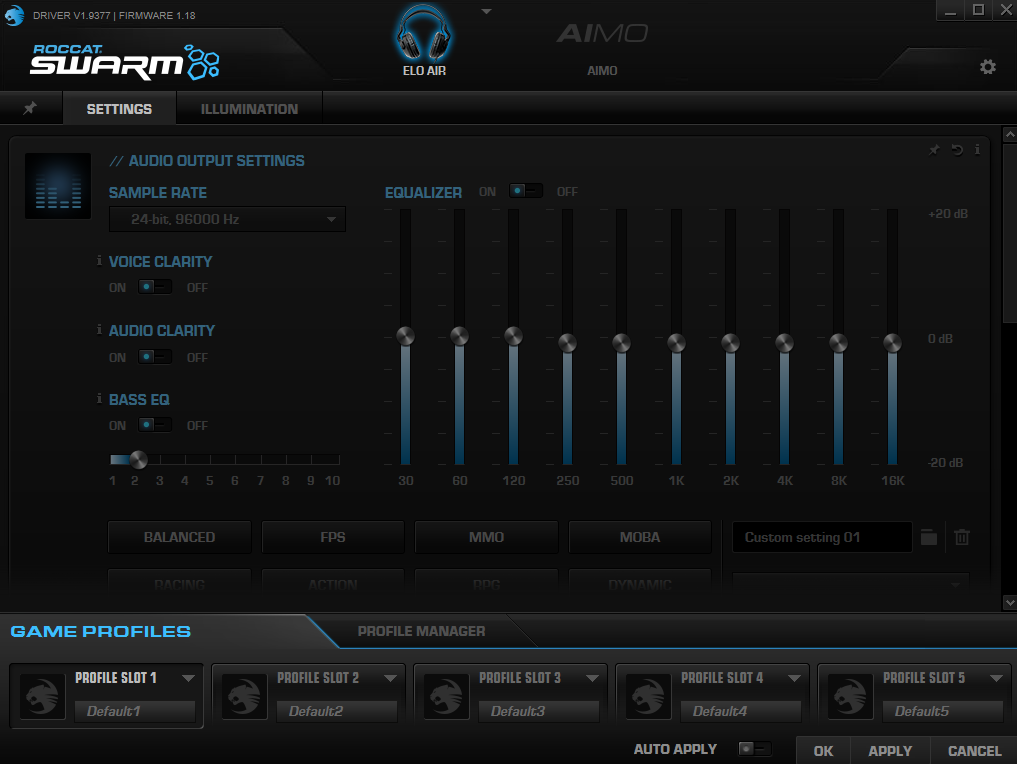 I think the Swarm application is easily one of the more impressive headset application on the market. The design is sleek, easy to navigate , and allows a users a deep amount of audio customization. Individual audio channels can be tweaked to meet the needs of any gamer out there, with a number of preset selections available at a click of a button. Additionally, you can create your own profiles to allow easy access when switching between titles. It truly does bring out the audio capability of the ELO, which is exceptional as it enhances all the sounds that are important.

Some quality of life features from the app also include battery monitoring, microphone sensitive adjustments, RGB lighting adjustments, and even some noise canceling features. It has all the essentials that a gamer could ask for, with some added perks sprinkled. Although I should mention that one of those perks is tucked away in the Swarm app, and it’s known as Superhuman hearing.

Being a huge competitive online gamer, sound has always been a major factor when considering upping ones game. Having to be able to hear footsteps, guns reloading, and far distant objects perfectly without anything getting muddle can truly give one a competitive edge. While the ELO 7.1 Air provides just that with it’s presets of options as mentioned before, the Superhuman hearing feature is without a question a game changer. 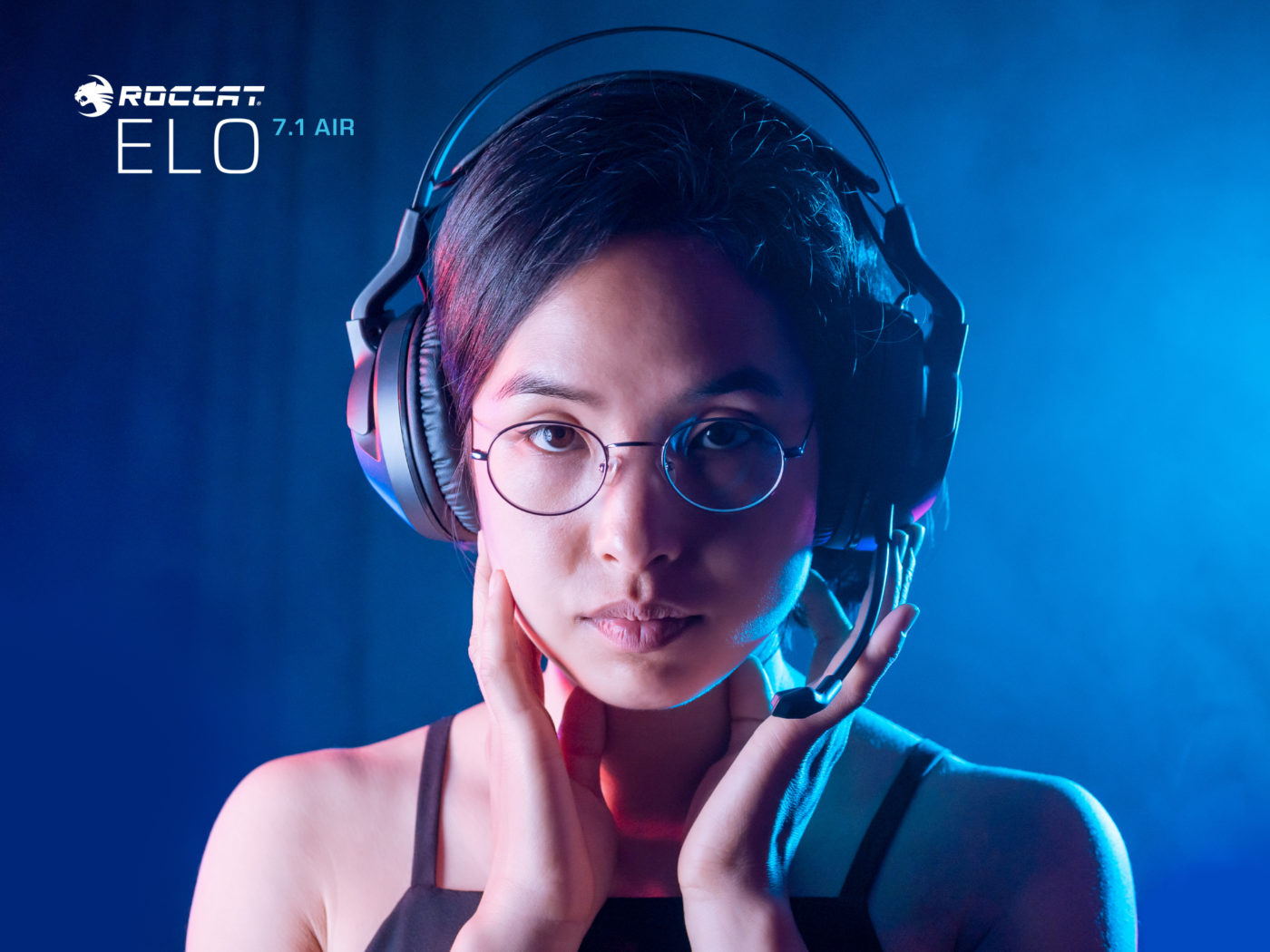 Upon turning it on, I could instantly tell there was a major difference in how sound was getting picked up. With Modern Warfare as our test title, I could now hear players far better as sounds were increasingly enhanced and amplified with superhuman hearing. Its not just a simple turn up the audio to make it louder either, as it seemed even more selective in the kinds of sounds it picked up over others. Focusing on the smaller details of sound, such as a ammo casing falling to the ground or someone reloading close by. Coupled with the excellent 7.1 surround sound and you have yourself a killer combination that provides a true competitive edge.

Microphone That Picks Up Too Much

If there was one big complaint I did have about the ELO 7.1 air then it’s how the microphone on it seems to pick up unneeded background noises. While I found the general output quality to be “OK” when I was the only noise going into it, some of my squad mates were quick to point out how loud my keyboard would sound, or how they could hear chatter in the background from my home. There are some adjustments that you can make in the Swarm application, however, even with the microphone noise canceling feature ticked it still picked up quite a bit of unwanted sound. This was even more apparent to me when turning up the chat slider on the headset, which made it so I could hear myself and all the feedback the mic was getting.

On the subject of volume sliders, I should mention that while this headset can be plugged into a console (tested on PS4), the actual volume slider is tied to whatever hardware you are using, meaning there’s not a true onboard volume control. So you are stuck with using whatever volume control is on the consoles. This is more of a fair warning rather than a con, seeing that this is a set built for PC. So the fact that it even worked on my PS4 in it’s capacity was a surprise to begin with, though I don’t recommend this as an option for console players.

While the microphone could use improved noise canceling capability, the Roccat Elo 7.1 Air is overall, a very solid wireless headset. Taking the high quality build that the Elo line is known for and bringing fourth some of Turtle Beach best audio features, the Roccat Elo 7.1 Air is easily one of the best wireless headsets for it’s price that a user can currently get. It’s superb audio, coupled with the Superhuman hearing, makes this one of the more worthy sets to have. Long lasting battery to keep you in the game longer, with light weight comfortability. It may not be the sleekest looking set around, but it certainly does the job at providing you with that competitive edge you always wanted.

The Roccat Elo 7.1 Air retails for $100. For details on where you can purchase a set, be sure to visit the official website here: https://en.roccat.org/Headsets/Elo-7-1-Air