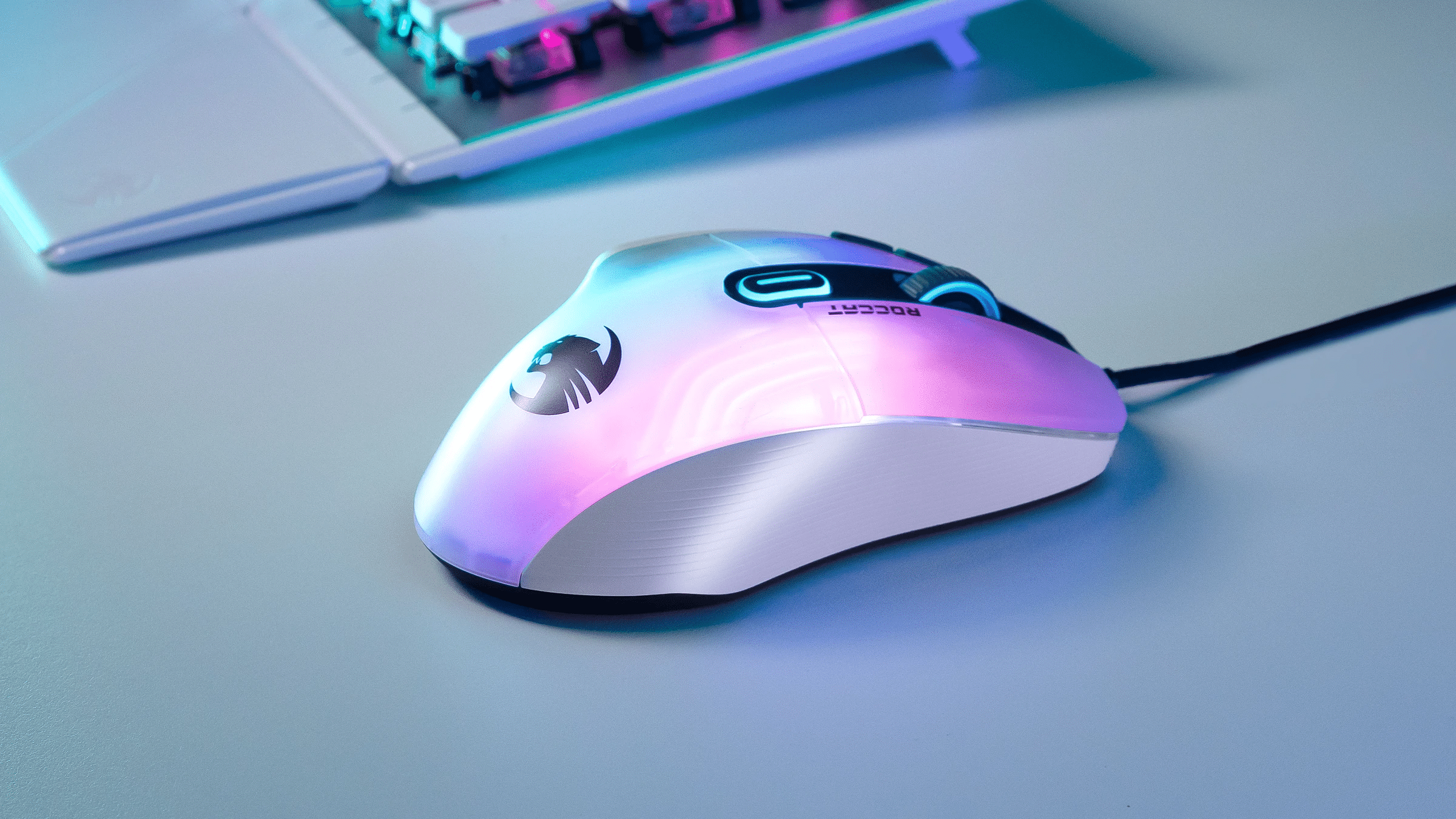 The Roccat Kone XP is ROCCAT’s latest gaming mouse featuring the brand’s iconic Kone shape, loads of RGB, and an absurd amount of programmable buttons. An updated version of the Roccat AIMO Remastered, the Kone XP now features even more buttons than its predecessor, updated ergonomics, a new 19K DPI sensor, and Nvidia Reflex support. All of this is done in a package that weighs 20% less than the original.

The Roccat Kone XP is an ergonomic gaming mouse with a total of 15 physical buttons and inputs across the entire mouse. In addition to the usual left, right, and middle click buttons, there are seven buttons on the left side of the mouse. The scroll wheel can also be tilted left and right for input, in addition to the usual middle click. Finally, the “Smart Shift” feature built into the Roccat Swarm software also allows you to program two different inputs per button and freely swap between the two at the press of a button. 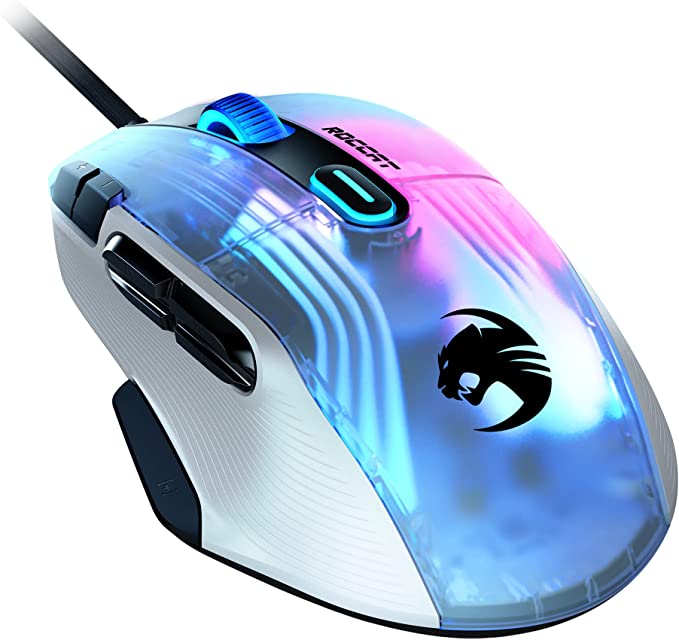 Also included is Roccat’s new “3D RGB” feature. The mouse has a transparent upper shell, which in combination with the 22 RGB LEDs basically makes it look like the entire mouse is glowing from the inside.  It comes in both black and white color options and the transparent shell is included on both. If you’re a fan of RGB bling, this mouse will be right up your alley.

So how does it feel? My immediate impression was that this is a mouse that seems geared more towards MOBA players, MMO players, or fans of games with a lot of inventory management. Really, it could work for any game or application where you want to program many different actions to a single button press thanks to the numerous inputs available. Honestly, I could see this being great for photo or video editing, too.

Unfortunately, if you’re a fan of lightweight mice this probably isn’t the mouse for you — particularly if you play a lot of first-person shooters. In an age where most mouse manufacturers are trying to get their mice lighter and lighter, the Kone XP almost feels like a throwback to the early 2010s. If weight isn’t an issue for you though, the Kone XP offers a lot of other nice features.

It is also quite a large mouse. The dimensions out of the box are 128 x 72 x 40 mm, with a grip width of 59mm. This makes claw grip difficult even for my slightly above average size hands. With that said, the curves on the mouse feel just right and the ergonomics overall are great. If you’re a fan of larger mice, Roccat has done an excellent job with the feel of this one.

With all of those caveats out of the way, the mouse itself checks pretty much all of the other boxes. At $89.99, no wireless capability is a bit disappointing, but the included cable feels premium and should cause no issues. The Titan Optical Switches feel nice and tactile, and the large PTFE skates feel smooth as butter. There’s even an extra set of skates included in the box. The scroll wheel feels particularly excellent, and although the mouse is a bit on the hefty side, the numerous input options will give you plenty of customization options.

There’s a smooth coating across the entire mouse with some nice matte texture specifically on the buttons. Even though there are a lot of buttons, for the most part the positioning of them feels surprisingly natural and I had no issues accessing any of them. Perhaps the one exception is the “Smart Shift” button positioned on the left at the very bottom. This is used to access another “layer” of inputs for a total of two per mouse button. It’s meant to be held down while you hit a different button to access its secondary input, but with its positioning it’s pretty much impossible to use with any of the the four thumb buttons. They probably would have been better off putting this button a little higher up on the left, or perhaps even placing it on the right which is completely free of any buttons as is.

Overall, while they definitely take some getting used to, there’s no denying the added convenience that such a large increase in mouse inputs offers you. The biggest adjustment I had to make was that there are four buttons where your thumb sits instead of the usual two.

I tried the Kone XP in Aim Lab, Destiny 2, and Call of Duty: Vanguard and it felt comfortable to use in all three. But since I’ve grown accustomed to lightweight mice, the hefty weight led to wrist and forearm fatigue a bit faster than usual. Outside of that, the mouse felt responsive and there were no issues with the performance.

My review sample came in white. It has a a two-tone “panda” design with white plastic around the sides of the mouse and black on the scroll wheel and all of the buttons. The entire upper shell of the mouse is semi-transparent which helps to enhance the RGB lighting. The Roccat logo and emblem are also included on top. While the white colorway doesn’t look bad, personally I would have preferred the black version.  With that said, the Kone XP really shines when it’s plugged in.

If you’re a fan of RGB then there’s no denying the mouse looks stunning. The lighting is bright and vibrant and fills up practically the entire mouse, especially in the Arctic White version. Even the scroll wheel lights up. And thankfully, even though they make liberal use of it, it doesn’t look too obnoxious or “gamery.” The Kone XP should fit right into any setup

The 3D RGB system allows for detailed lighting effects that radiate from the inside. While the Roccat SWARM software is a little light on RGB presets, it does allow for a good amount of customization. Each lighting zone can be tweaked separately when set to the “Breathing”, “Blinking”, and “Steady” presets. It also includes the ‘AIMO Intelligent Lighting System’ which reacts to your movements and is “enriched” by the apps and devices you use. 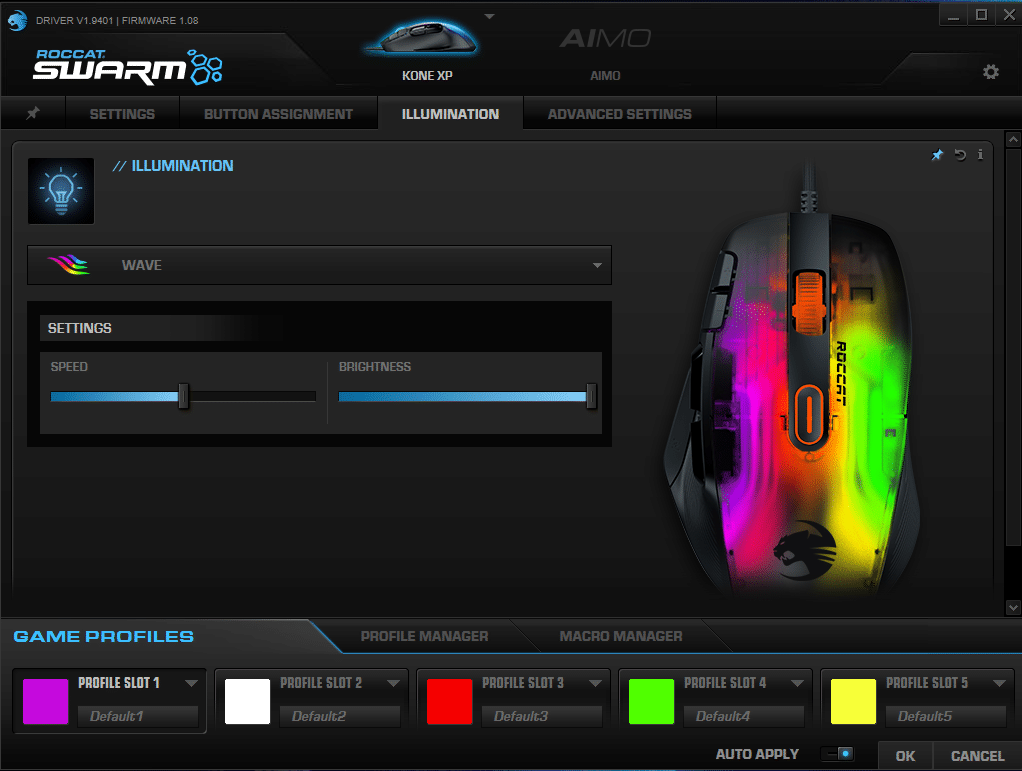 The mouse’s smooth coating can get a little slick, so if you have sweaty hands this could be a bit of a problem. A little bit of texture would have been nice in my opinion but that comes down to personal preference. On the bright side, after many hours of use, fingerprints and smudges didn’t seem to be a problem.

The Roccat Kone XP is pretty much the dream mouse for lovers of RGB. However, at 104 grams, the hefty weight may be a dealbreaker for some and at $89.99 there are certainly other options out there. For the price though, you’re getting an endless amount of customization, and over two dozen keybinds which can do wonders for productivity and macros. The lighting is some of the best I’ve seen and that, combined with the comfortable ergonomics make for a mouse that looks and feels premium. Roccat’s high end sensor and optical switches should lead to great performance, and overall make for a high quality gaming mouse.

The Roccat Kone XP gaming mouse will be released on March 29 for $89.99. You can check it out and pre-order at Roccat’s official website.

Kone XP was provided by the publisher for review purposes. You can read SP1st and MP1st’s review and scoring policy right here.

Don’t Starve Together Update 2.39 Fritters Out This March 24 for Improvements