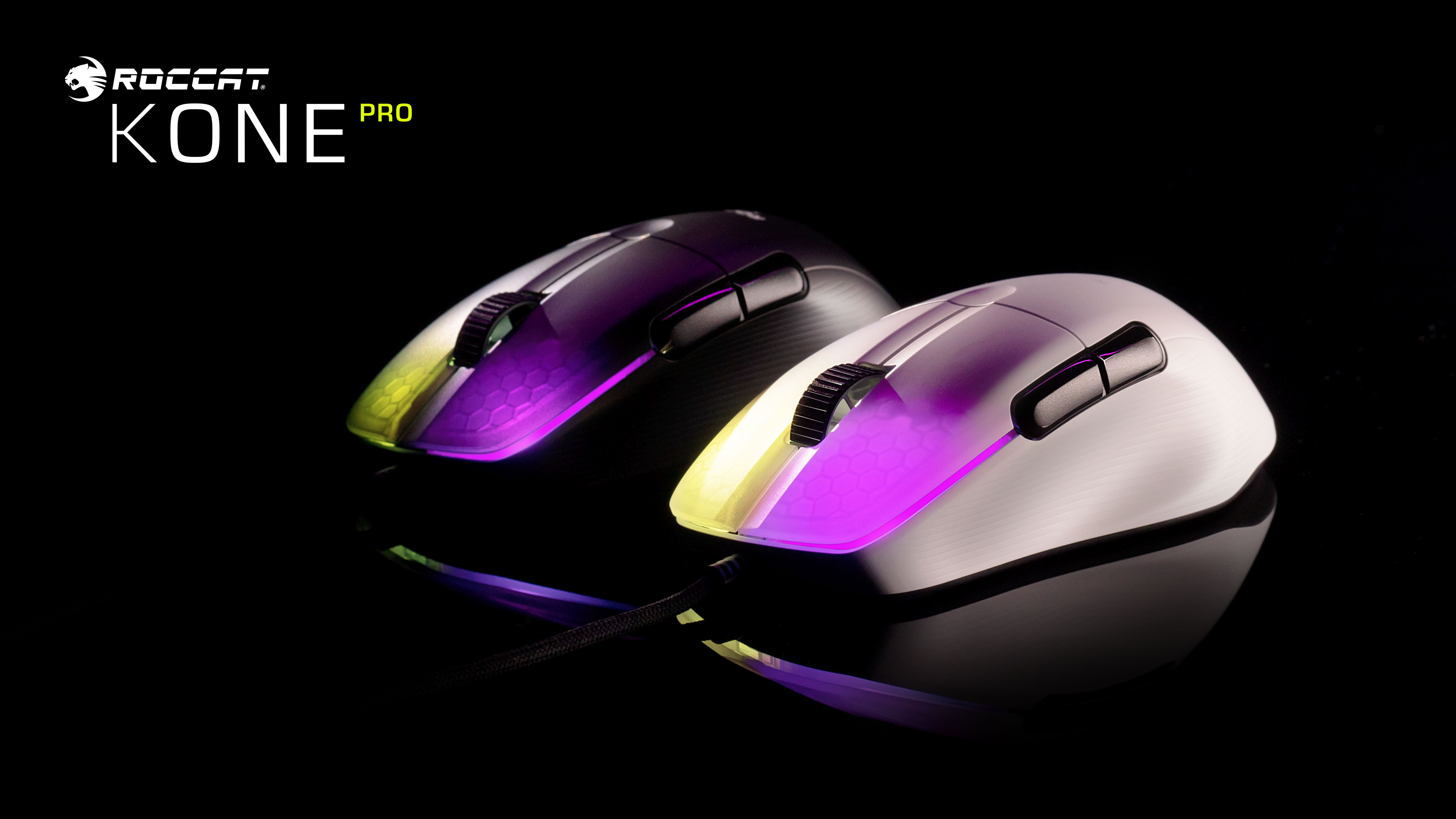 ROCCAT is back with yet another exciting addition to their line PC peripherals, though this time they’re looking at breathing in new life into a long successful line of gaming mouse, the Kone. Yep, that’s right, after 13 long years of being one of the top esport-supported products, ROCCAT is ready to introduce the world to an all new, fresh series of Kone gaming mouse. Learning everything they have in the last decade, and combining it with all the latest in technology, meet the new and improved, Kone Pro.

In our review of the ROCCAT Burst Pro mouse we noted that we loved the simple, beautiful design that the team went with for their casing, and how comfortable it was using compared to other mouse we’ve tested. It easily became my favorite mouse, and has been used since. Well, like all good things there is always something better to come around, and that something is the Kone Pro. 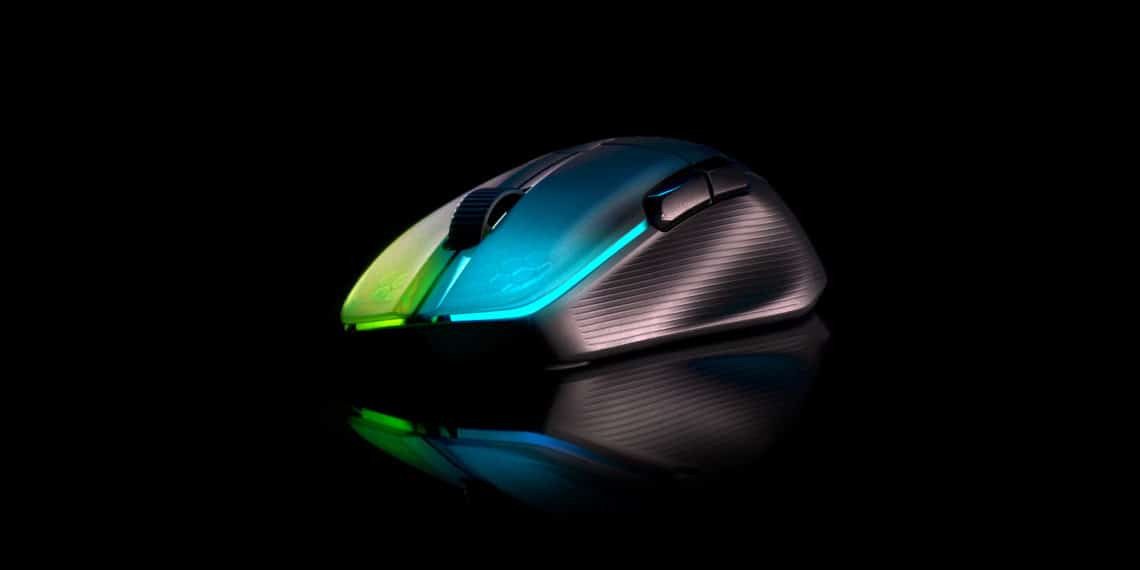 Following in its steps, the Kone Pro keeps things simple in the design department, but ups the overall comfortability. With a bulkier design, and bigger buttons, you’d expect the Kone Pro to feel a bit worse compared to the Burst, but in actuality it isn’t.

For one, the Pro Air has better resting support. With an elevated height, your palm can rest more comfortably, no matter the position. The left and right side rest specifically have curved lips, allowing fingers to rest within the mouse itself. Not only does this provide less strain on your hand, but it also gives you a more grippier feeling. Grippier grip, means better handling, which means you have far better control with your speed and accuracy.

Talking a bit more about the side lips, the Pro Air, like many other gaming mice, offers two additional buttons. What I really liked a lot about the left side of the mouse (where the buttons are) is that the lip doesn’t seem to get in the way of these buttons. I’ve had issues in the past where either the buttons are too close to the resting position, or there’s no lip at all and it has caused accidental pushes. Not with the Pro Air as there is an appropriate amount of space between your thumb and the buttons. It feels quite nice, if I must say.

Then there’s the scroll wheel, which is also pretty large but appropriate in size of the mouse. As stated by the ROCCAT team, the scroll wheel in the Pro Air is made of solid aluminum (meaning lighter weight) that is said to adapt to finger temperature and offer even more comfortability. I can’t really attest to that bit about finger temperature, but it certainly has a very comfortable, and satisfying scroll and click. What’s more, the tactile click it makes while scrolling is remarkably silent. Whether you like that or not is all user preference, as all things of course, but I was pretty happy with it myself.

Of course it wouldn’t be a ROCCAT product if it didn’t have any RBG lighting. I’ve said it a few times in my other hardware reviews that I’ve never been a big fan RBG lighting, because it all too distracting, especially when playing in the dark. I think ROCCAT really understood this when it came to designing their mouse shell, which all seem to be heading towards the translucent honeycomb style. On top of being durable with extremely light weight material, the casing on these mice also limit the amount of light, at least to the point where you aren’t going to be blinded if you look down.

I really love that, because I hate light reflections bouncing from my PC monitor. I had this issue with the DualShock 4 light bar, which is why I eventually disabled the light via hardware modification. Of course with the Swarm software that ROCCAT is pushing for, all those lighting effects can be customized, and even disabled.

One big difference between the Kone Pro and the Burst Pro is where the RGB lighting is located. The Kone Pro Air moves the RGB lighting from the bottom of the palm, and positions them right under the left and right clicker. I really love this change, as it allows users to give the mouse a hint of their own personality while not covering it completely with your hand.

There’s also no RGB lighting coming from the scroll wheel, though that makes a lot of sense once you realize how elevated the wheel is and that you can see right through it, giving the illusion that there is light coming out of it. It’s a clever design choice that I feel many will overlook. 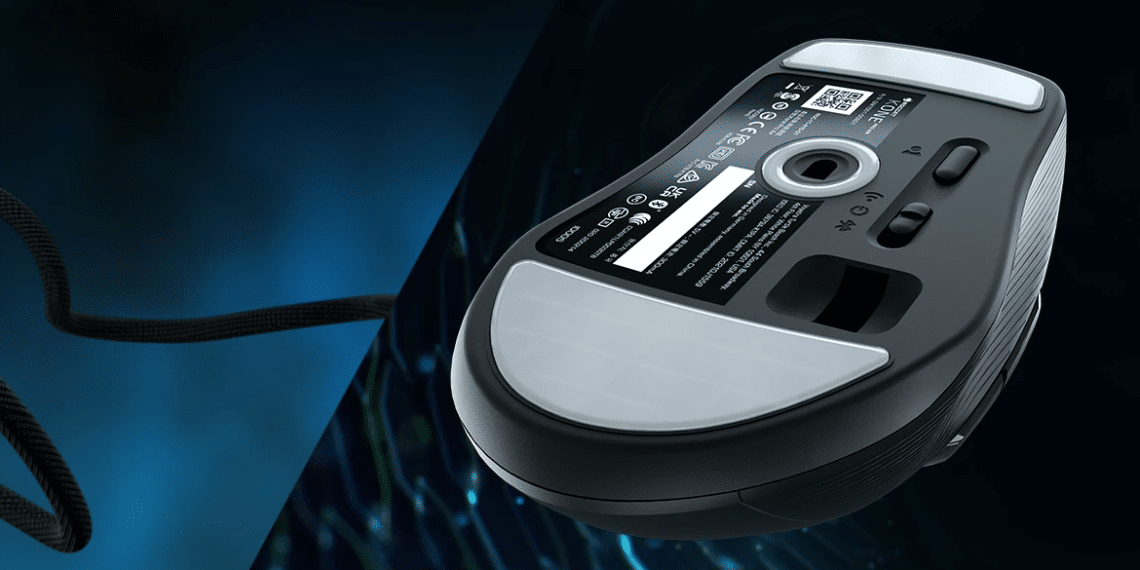 The Kone Pro also has heat-treated pure PTFE gliders on the underside, which offers a total free and smooth range of motion on almost any kind of mouse suited surface. What’s interesting though is that the optical sensor also has a ring created with the same material. I’ve never seen that in a mouse, and taking a closer look at it also revealed that this provides a bit of a lift, allowing the sensor to be better protected from surface dust and such. Again, another clever design decision.

As for the weight, the Kone Pro and Kone Pro Air sit at 66 grams and 75 grams respectively. For those not in the know with PC gaming mouse, these are pretty impressive numbers as they hit just around what many consider as lightweight, and if anything, more so in the ultralight weight division. The Pro Air is a bit on the heavier side, but that’s more than made up in the fact that there is no cable to string around as you move. It’s still noticeably heavier, but it’s not a major drawback by any degree.

Overall, I’m impressed with the design of the Kone Pro. It feels like a great culmination of everything that ROCCAT has been achieving right, with the latest in technology wrapped inside of it.

Both the Kone Pro and Kone Pro Air are equipped with the Owl-Eye 19K optical sensor, which as the name suggests, offers an astonishing 19,000 DPi (dots per inch). This in turns means that you are going to be getting better movement detection, and for a mouse that earned it’s name in the esport industry, this is crucially important. 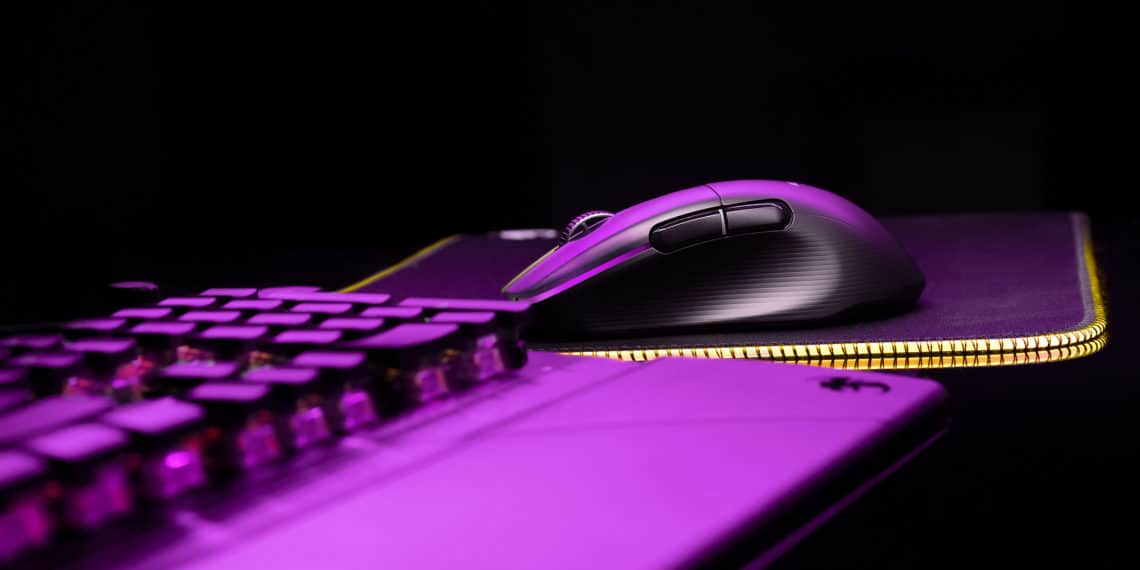 Seeing that the Owl-Eye sensor is based on the the stellar PAW3370, it really should come to no surprise that when it comes to movement, precision, and accuracy, the Kone Pro delivers.

As someone who enjoys the 1:1 movement of a mouse being shown on screen, I can safely say that the Owl-Eye 19K doesn’t disappoint. My playtesting yielded no noticeable input lag, even for the wireless Kone Pro Air version. Testing out some popular shooters like Black Ops Cold War, Apex, Legends, and Fortnite, it was easy to tell how much of a difference the Kone Pro was compared to the other gaming mouse.

Then of course there’s the latest from ROCCAT, the Titan Optical Switch. I’ve covered how much of a beast of technology it is in our ROCCAT Vulkan Pro Keyboard, though to be frank testing this functionality out in a mouse is a whole lot harder. As I mentioned in the Burst Pro mouse review, it feels more responsive, but the differences are pretty negligible. In the grand scheme of things, however, is that if what ROCCAT say is true, and we have no reason to really doubt them considering their quality, then this mouse should last a whole lot longer than your traditional, mechanical one. Three months in with my Burst Pro and I still have yet to see any kind of wearing. I fully expect the Kone Pro to last me for many years to come.

All this, combined with the above mentioned of the design and comfortability improvements, has made the Kone Pro one serious mice killer. Fitting since the word “cat” is in it’s brand name.

Sadly there is no dedicated DPi button like you would find on many other gaming mouse. I was a bit bummed by this at first, but to add a silver lining, the lack of one did allow me to better customize my experience with the Swarm app. I would have still preferred a dedicated button, but I am glad I can still set the DPi level by some form, even if it’s by software. And since this mouse is geared towards the competitive side of things, I can understand lack of one as I have on countless occasion, accidentally hit the button on my Burst Pro. It’s not fun being in the middle of a firefight with your aim sensitivity all of a sudden jacked to max or slowed to a crawl. So I can understand if it lacks it, but that boils down to preferences.

Everything I’ve said up until this point applies to both versions of the Kone Pro mouse. They’re both remarkably comfortable, with a design that suits any playstyle, and when it comes to their performances, both are superbly excellent. So the real question here is, is the wireless option worth the added cost?

Running off either off Bluetooth connectivity, or through the 2.4ghz dongle, the Kone Pro Air offers, on a full charge, around 100 hours of uninterrupted gameplay. That is a lot more than you get out of most batteries. On top of that, it’ll also fast charges five hours worth of gameplay in a matter of 10 minutes! We’ve been testing the Kone Pro Air for weeks and have yet to run out of juice, though it does help that there is an auto-off function to help conserve battery when not in use. 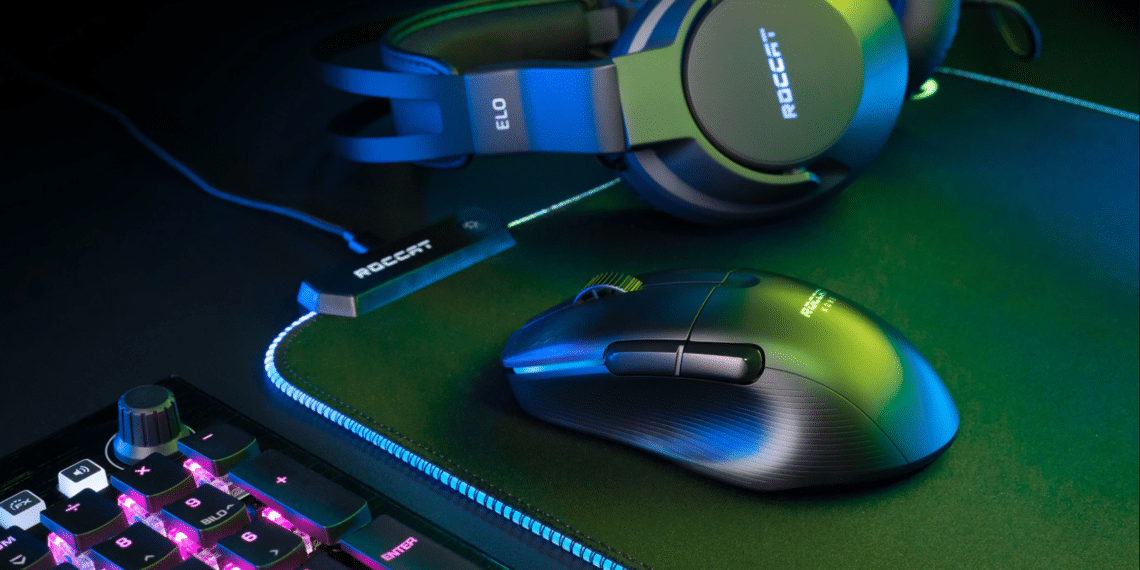 Even more great, if for whatever reason you don’t want to use the wireless functionality, using the USB 2.0 to USB-C cable that comes with it, you can also use the Kone Pro Air as a wired mouse, so you get the best of both worlds.

Now whether or not wireless functionality is something you want is entirely up to you. Personally, because the Kone Pro Air offers the same quality build, performance, and comfortability as the standard version, it’s really a no brainer to invest in the wireless version. The only downside I suppose is that it’s $50 more, bringing it past that $100 ($129.99) price point for those wanting to stay within budget.

Despite having less buttons than a lot of other gaming mouse, the Kone Pro and Kone Pro Air both feel like a complete package with year’s of ingenuity behind them. The design feels great in the palm of our hands, and it’s clear this mouse was built to offer the best kind of comfortability, with the best kind of performance that you can get out of a gaming mouse. I never got the chance to experience past iterations of the Kone mouse, but from my testing, I feel that fans of the iconic brand will come to love everything the newest has to offer.

ROCCAT has once again proven why they’re a household name with the Kone Pro, taking no shortcuts, no sacrifices at providing it’s PC community with the best can, and more.

Chivalry 2 Open Beta Starts May 27, Check Out the Modes and Features Here