The filing (which was applied on November 30, 2020 and was published last week) over on Patentscope states the following: 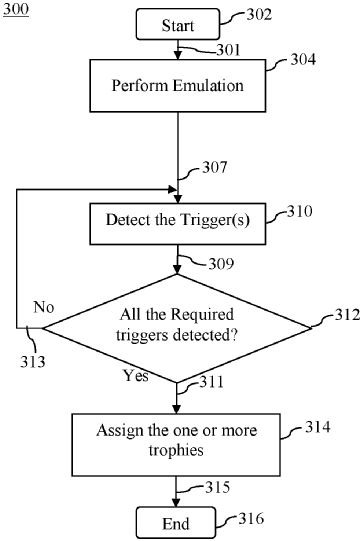 A computer-implemented method assigns one or more trophies to a user. A game is emulated in response to a request from a client device. A trophy trigger is detected during emulation of the game by comparing a memory value of the emulated game to a predetermined value and assigning the one or more trophies to the user based on the detected trophy trigger

The patent goes on to describe this as method of implementing trophies into previously released games that have no trophies, without actually modifying the software itself. For example, PS2 games previously released on PS4 that have trophies are essentially native console ports for the system, thus the reason why they work on PS5 still.

However, some older PS2 titles, say from the PS3 are still the original versions that released on PS2. Because of this, they lack trophy support of any kind and adding them would require the game to be modified, thus creating a “native” port for the newer console. This patent seems to be looking into a way around that, adding these trophies via network or software emulation, thus keeping the original game code intact.

Note that not every patent filed from a company gets used, however it does seem a bit odd that they would be looking into emulation of awarding trophies for old games, especially since the PS5 is backwards compatible with almost all PS4 games, and nearly all have a trophy set already. Perhaps Sony is looking into implementing this into PlayStation Now, or maybe backwards compatibility for PS1, PS2, and even PS3 isn’t entirely off the table? Who knows, but it is an interesting patent.