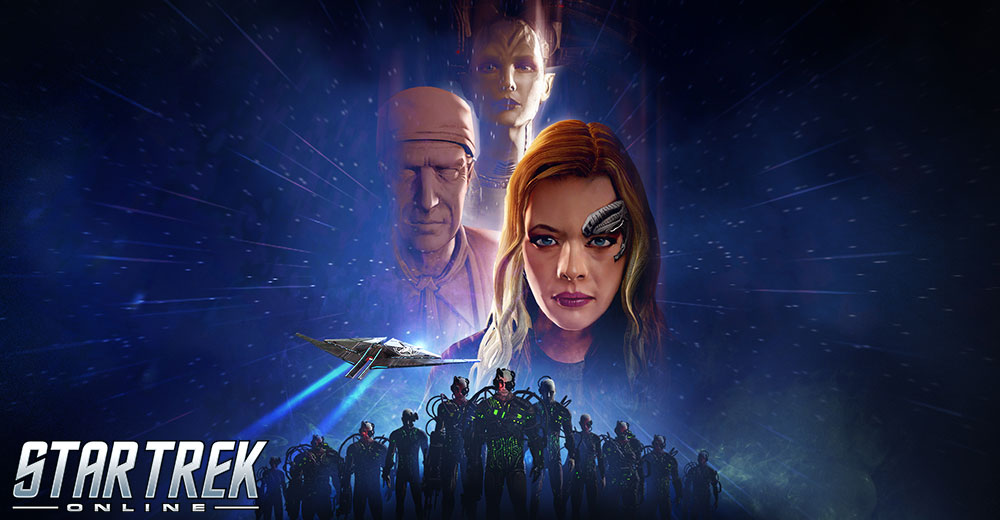 Get ready to relive a next generation film adventure and boldly go where no one has gone before, as Star Trek Online celebrates First Contact Day — which runs from April 1 to 22!

Here’s the details for the event courtesy of the Star Trek Online website.

Star Trek Online is pleased to once again invite you to join us for the First Contact Day Celebration starting on PC and Console on April 1st, 2021 and continuing until April 22nd, 2021.

Join the festivities by competing with four other players to build and launch your very own Phoenix Rocket, travelling back to April 4th, 2063, to thwart the Borg’s efforts to prevent the historic event, or, new for this year, participating in a recreation of the Synth attack on Mars! Once per day, any activity will grant a Daily Progress toward the Grand Prize – the Martian Mining Laser. Fatefully used in the synth uprising on Mars, this is a powerful ground weapon.

Keep reading to reveal what activities and prizes await those who join us to celebrate “First Contact Day.

For the first time, Synth Wave joins the First Contact Day event! The Synths working on Mars have rebelled! Fight in orbit above the red planet, working with a team of fellow Captains to do as much good as possible before you are overrun in the Synth Wave TFO. The fate of Utopia Planitia hung in the balance, perhaps your insight will help us tip the scales if we are tested again someday.

The Borg continue their implacable advance, only this time the battlefield is across time, not space. Temporal abnormalities have prompted Daniels to slap together an away team to go back to mid-21st century Earth where The Borg have altered the timeline to ensure that they succeed in their previously-foiled plan to stop First Contact between Earth and Vulcan.

Team up with Seven-of-Nine and discover what The Borg have done to alter the timeline, and then do everything you can to correct it. Just make sure not to do more damage to the timelines than The Borg already have.

Alternatively, if battling robot-zombies isn’t your cup of Earl Grey, you can participate in the good ‘ole Phoenix Rocket Launch competition. We hope you enjoy the friendly rivalry as you scramble to gather parts and assemble the best rocket under the watchful eye of enormous marble Dr. Cochrane himself.

Completing either of these participating activities once per day, per account, will earn you a First Contact Day Badge Box. Opening this box will grant players the opportunity to choose between 17 Comm Badges as account-wide unlocks. Once unlocked, these immediately become accessible from any Tailor for any Federation character on your entire account.

Daily Progress is also earned once per day, per account, for the first completion of either participating activity. Keep earning Progress to earn your way toward the completion of the First Contact Day Event. Upon reaching 14 days of Progress, you will become eligible to claim the Grand Prize! This includes the following items:

A replica of the industrial equipment used during the attack on Mars, the hand-operated Martian Mining Laser is a powerful tool for separating veins of ore from surrounding rock, among other things. Just as ancient mining picks found their way onto the battlefield, the hand-operated Martian Mining Laser has a certain unorthodox effectiveness, holding the dubious record for most confirmed kills among excavation equipment. The primary attack deals fire damage to foes in a line, and the secondary firing mode adds fire hazards to that impact. Replacing palm strike, the tertiary firing mode discharges the capacitor from the prongs directly, delivering an electric shock to stun opponents.

Celebrate the historic launch of the Phoenix year round with this special device! Upon activation, it places a model of the Phoenix in front of you, which quickly launches in the sky.

A special Holo-emitter for your shuttles and fighters that will make your ship look like the Phoenix. This device has an unlimited duration, unlike those provided by the Ferengi.

Earning the Grand Prize from this event for every character on your account is as simple as participating in any of the eligible activities over the course of its run. But remember that completing the 14-day requirement isn’t necessarily the end of the rewards you can earn! Additional Daily Progress also grants you scaling Dilithium Ore bonus rewards, after you have claimed the Grand Prize. You’ll receive 8,000 Dilithium Ore for each bonus completion.

Players unable to find the time to complete the Event, or interested in rushing to complete their progress, will have the opportunity to purchase the remainder of their Daily Progress using Zen at any time. The initial pricing for this Event’s buyout will be 2000 Zen, but like all other recent buyouts, the price any player pays will be discounted based on the amount of Daily Progress you have already accrued.

For more about Star Trek Online, check out our archives here.

Star Trek Online is available to play on PS4, Xbox One, PC, and Mac OS.