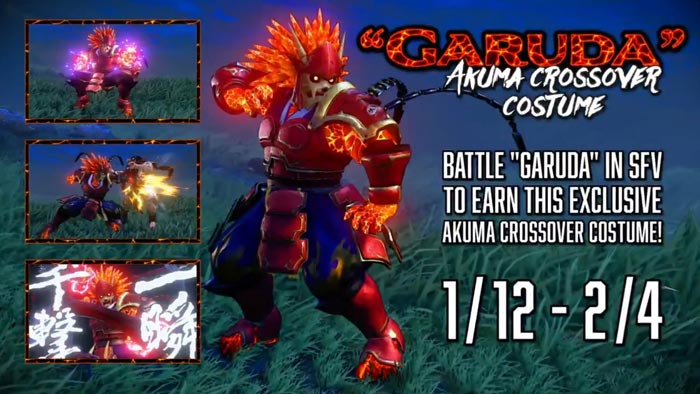 Nostalgia makes its way in the form of another crossover costume Street Fighter fans can acquire in Street Fighter 5: Champion Edition, as Capcom reveals that Street Fighter EX and Fighting EX Layer character Garuda is the latest alternate outfit Akuma/ Gouki will be getting in the game courtesy of Extra Battle mode!

As the latest crossover costume to hit the game, Garuda marks the fifth character representation from Fighting EX Layer — Arika’s fighting game series that is a spiritual successor to the Street Fighter EX series developed by Capcom and Arika that was released in the late 90’s and early 2000’s. Made mostly of former Capcom staff and designers, Arika was founded in 1995 and headed by Street Fighter II creator Akira Nishitani. The Street Fighter EX saga was a 2.5D spin-off series that featured fan favorites like Ryu, Ken, Guile, and Chun-Li but also introduced original characters like Kairi, Hokuto, Skullomania, and Garuda. These fighters would not be seen in any Street Fighter games after the EX series since they were owned by Arika — however Capcom has apparently rebuilt bridges with the company and has added these characters back somewhat in the form of Extra Battle costumes straight out of their appearance in Fighting EX Layer.

Be sure to check out more Street Fighter news and features here on MP1st.

Street Fighter 5 is available exclusively for PS5 and PC.