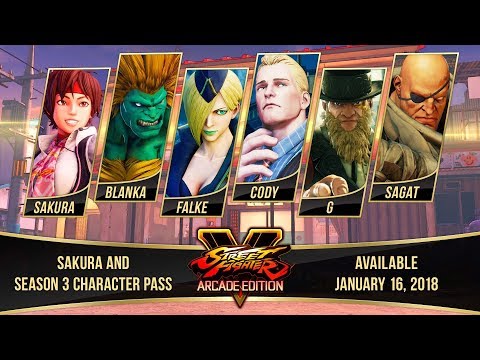 After the grueling Capcom Cup 2017 tournament concluding yesterday, Street Fighter V fans have more to talk about aside from the tournament results itself.

During the closing moments of said tournament, Street Fighter V franchise maestro Yoshinori Ono himself took the stage to reveal what’s to come for Street Fighter V come season three. This, of course is none other than reveal the of DLC characters that will arrive throughout the span of the third season.

You can check out the reveal trailer below:

Being a longstanding Street Fighter fan myself, I must say the addition of classic characters such as Blanka, Cody, Sakura and Sagat is always welcome. Though I’m more looking forward at what Capcom has planned with the new characters to the series Falke and G. Whom the latter seems to be the “president” character that has been leaked weeks before, especially since he appears to have an Uncle Sam-esque pose.

Season three for Street Fighter V is set to kick off Janaury 16 with the addition of Sakura, in which you can check out her below as well.