As part of today’s Street Fighter 5 Summer Update livestream, Capcom has announced the Street Fighter 5 Season 5 new fighters and they are Dan, Rose, Oro and Akira Kazama from Rival Schools! In addition to that, the Season 5 roadmap has been revealed as well, and there’s a mystery new character that’s yet to be announced!

Here’s a quick look at when each character is scheduled to be released and with what stage or costume: 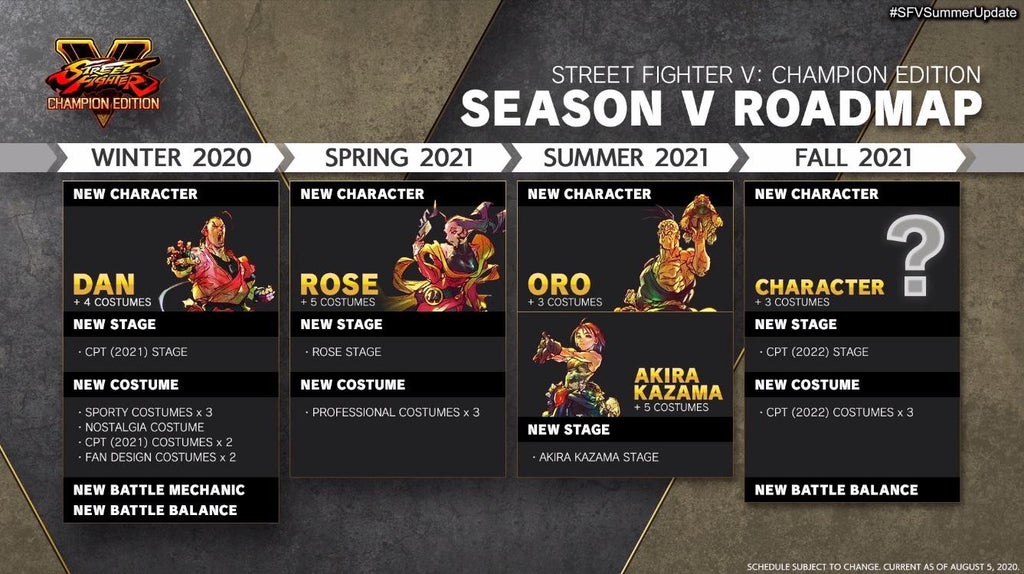 A mainstay from the Street Fighter Alpha series and last appearing in Street Fighter IV, Dan Hibiki will be bringing his (over) confidence and iconic “Taunt” to Street Fighter V. A training partner of Ryu and Ken, Dan considers himself well-equipped to “school” other players with his unique Saikyo-ryu (“Strongest Style”) fighting style. Release timing: Winter 2020

Rose is a fortune telling fan-favorite character who also previously starred in the Alpha series and Street Fighter IV. Using her tarot cards, Rose will arrive armed with a variety of unique special moves and plans to channel all of her Soul Power energy into Street Fighter V. Release timing: Spring 2021

Last appearing in Street Fighter III: 3rd Strike, Oro is an ancient martial arts master who exists as an immortal hermit. He restricts one of his arms from use in order to give his opponents an advantage, but that won’t stop Oro from being one of the most well-trained and powerful fighters in Street Fighter V. Release timing: Summer 2021

First introduced in Capcom’s 1997 fighting game Rival Schools: United by Fate, Akira Kazama is preparing to make her Street Fighter debut. As an acquaintance of Sakura, Akira has previous ties to the Street Fighter universe and is gearing up to bring her biker style look and clever gimmicks to Street Fighter V. Release timing: Summer 2021

Those not familiar with Rival Schools, it’s another fighting franchise from Capcom, though it has been dormant for quite some time. The last Rival Schools title was released in 2000 as Project Justice: Rival Schools 2 in the arcades, and was then ported to the SEGA Dreamcast.

Once we know the official release date for Season 5, we’ll let our readers know.

Update: Capcom has sent out the official press release, and we’ve updated the post to reflect that.