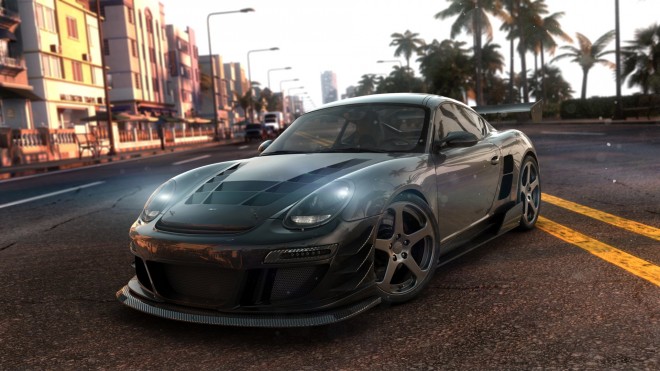 Ubisoft’s The Crew Supports ‘No Player Limit’ And Boasts 10,000 km Worth Of Road

The Crew, an open-world racer co-developed by Ivory Towers and Ubisoft Reflections which was was revealed to the world during Ubisoft’s 2013 E3 conference, will be biggest game ever, according to developers.

Though it seems a little far fetched, Ivory Tower’s COO Ahmed Boukhelifa offers some concrete details to support this claim.

Talking with OPM, Boukhelifa admitted that saying game’s world covers the whole country of the United States is taking a bit of “poetic license.” However, Boukhelifa did reveal that The Crew will contain a rather impressive 10,000 kilometers (which roughly equals to 6,213 miles) of road, covering areas such as New York, Miami and the West Coast for it’s playground, with a coast to coast trip taking 90 minutes to complete.

With a game that huge, Boukhelifa  claims it “opens the road to much, much more gameplay experiences than before. You have this huge open-world. We spent lots of time-building a physics model with the goal to create all the cars with differences in handling, but also to tune them and make them behave correctly whether you’re on a dirt track, completely off-road, roaming the mountains, on circuits. With this and the variety of the physics experience, all the cars in this huge open-world, we can really provide this a la carte experience of driving the way you want, as you want.”

When asked how many players a server could support, Boukhelifa stated “Everyone” and that the game will include “No player limit.” He goes into more detail in his previous statement, saying, “The way we work is we split, technically speaking, the area around you is peer-to-peer, all the MMO services, they come from the server. Those MMO services can manage for everyone in the world from a selection of localized servers and those servers network together.”

Additionally, The Crew will feature different types of  missions such as races, takedowns and escape scenarios. Boukhelifa goes on to say “I think that we can create any mission that ever existed within a driving game. So we have this huge variety, and when you add in the modified terrain – on-road, off-road, with traffic, no traffic – there’s this huge, huge variety and we’re using it extensively for all the solo-missions, co-op missions, PvP missions.”

On top of all this, Boukhelifa also explained, “we have our story layer, our context layer that brings sense and meaning and which sends the gameplay mechanics into the world and because you’re online we can renew content all the time, get the community to be alive. And we’ll provide content for the whole country, all the time.”

Gamer for the past 20 years who loves anything ranging from RPGs, Fighters and of course FPS games.
News Featured, No Limit, PC, PS4, The Crew, Xbox One
view related posts
HOT MULTIPLAYER GAMES
& UPCOMING RELEASES