While we got the Phase 2 of The Division 2’s Title Update 11 PTS (Public Test Server) patch notes last week. that’s not the full list of fixes and changes that we’ll see in the final version of the patch  when it launches next week. In the latest State of the Game, Ubisoft outlined more The Division 2 Title Update 11 additional changes.

They are looking into difficulty, Directives, Targeted Loot, and other optimizations for a more customized challenge that fits you.

The Discovery Mode for the Operation Iron Horse Raid will become available when Title Update 11 drops.

The pistol recalibration bug will be fixed with TU11.

They went through the Global Events (Reanimated, Guardian, and Polarity Switch) and they made some drastic changes in how they work.

In essence, they’ve taken away many of the negative aspects and kept the positive effects of those modifiers to make sure you actually want to have them active because they make you feel more powerful.

The PVP balancing changes are listed in the PTS patch notes: Link

No additional PVP content will be added with TU11.

The title of Season 3 will be “Concealed Agenda”.

The Season will start immediately with the launch of TU11.

The Prime Target will be the Black Tusk Leader Bardon Schaeffer.

Season 3 will continue the story that you have been experiencing in Division 2 and you will go after Bardon Schaeffer, the last leader of the Black Tusk Special Unit (BTSU). During the Campaign, you took down the other BTSU leaders one by one – like Wyvern in Tidal Basin for example – and Schaeffer is the last man standing. So now you have the chance to really hit the Black Tusk hard and take down their leadership.

Season 4 will follow after that and there you will encounter Faye Lau as the Primary Target: 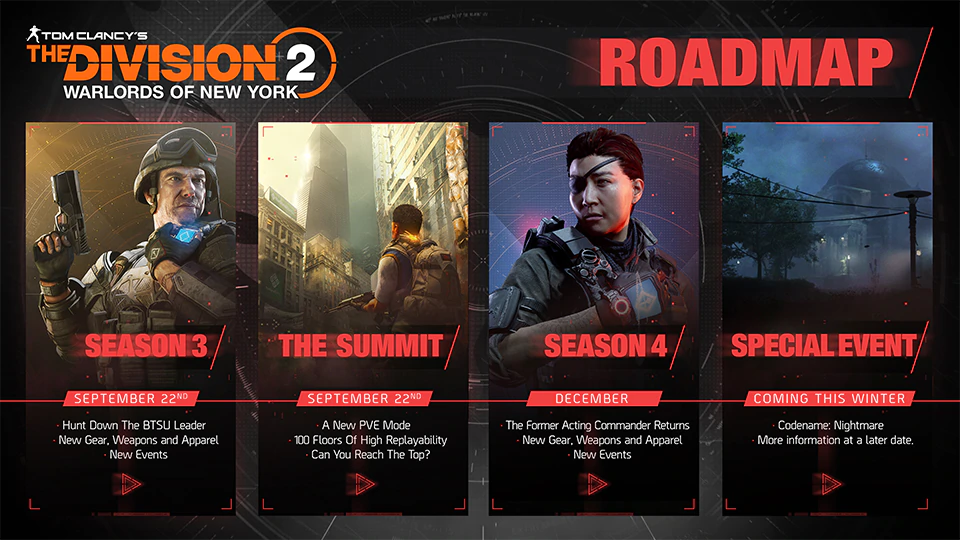 Don’t forget, the big part of Title Update 11 will be The Summit mode that will be available to those who own the Warlords of New York DLC. You can read uo about that here.

Once the patch is out or the official notes are released beforehand, we’ll let our readers know.