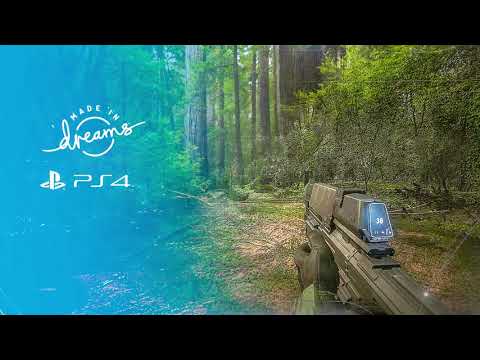 Have you ever wanted to play Halo on a PlayStation console? Did the Halo Infinite gameplay reveal got your juices flowing? We’re not going to see Microsoft’s premiere first-person shooter franchise on a PlayStation device anytime soon, but this Dreams Halo Infinite project might be the closest one we’ll get to that, and it looks fantastic.

Don’t believe me? Check out the work of DISARMED (Twitter, YouTube), and remember, this was made in Media Molecule’s Dreams!

Mind, this isn’t a game just yet. According to DISARMED, it’s a showcase to display what Dreams is capable of using current-gen hardware, and that it’s “super, super early” in development. It’s also not available for download currently, so fat chance using this to fake your friends out, folks.

In addition to the Dreams Halo Infinite project, if you liked how the greenery looked in that video, DISARMED also made a VR test for a forest as well. VR in the Dreams was introduced in the latest game update released last week,

absolutely loving the VR support. this is the start of a new era for @mediamolecule & the #MadeInDreams community! pic.twitter.com/Qv7SCSbypk

While Sony has quite a impressive number of first-party franchises under its belt, one of the genres it still (kinda of) struggles with is your standard first-person shooter. Sure, Killzone and Resistance were fantastic games, but it’s not on the same level as Halo. We’re not going to see a full-fledged Halo game on a PlayStation platform anytime soon, and what we’ve seen above is probably the best we can hope for — at least for  now.