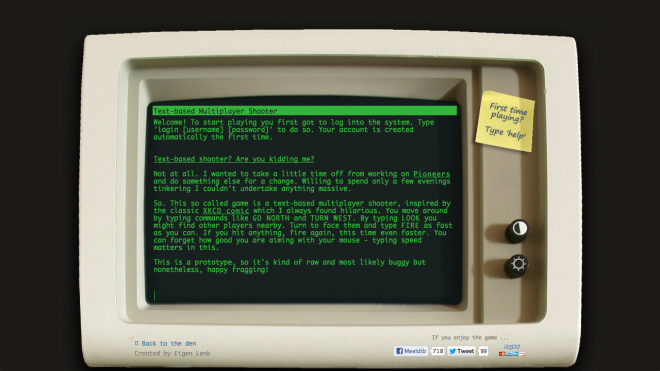 Based entirely on text, Text-based Multiplayer Shooter (yes, that’s what it’s called) is exactly what its title says: a free-to-play, browser based multiplayer shooter that takes things to a whole different level.

All the essentials are here, including a lobby and all your basic FPS mechanics like maneuvering, shooting and reloading. Players can enter text like “turn east,” “go west,” “look,” “fire” and “reload.” All of this is done in real-time, meaning you’ll have to be quick on your fingers. It is also possible pull up a map of sorts made entirely of hashtags that can display your current position.

Developer Elgen Lenk explains, “So. This so called game is a text-based multiplayer shooter, inspired by the classic XKCD comic which I always found hilarious. You move around by typing commands like GO NORTH and TURN WEST. By typing LOOK you might find other players nearby. Turn to face them and type FIRE as fast as you can. If you hit anything, fire again, this time even faster. You can forget how good you are aiming with your mouse – typing speed matters in this.”

You can play Text-based Multiplayer Shooter for free right here.

If you’ve tried it, let us know what you think! More exciting that Call of Duty?