A representative of Respawn Entertainment who goes by the name “DK05” on NeoGAF wrote the following in response to player count concerns in Titanfall:

“Lots of armchair game designing going on in here. I’d suggest playing before judging a something as insignificant as a number in a vacuum.

Vince is right – we tried a huge amount of playercounts (all the way down to 1v1 and up quite high) and designed the maps, gameplay mechanics, and entire experience around which played best. If anyone wants to chase the numbers game, perhaps we’re not the experience they’re after? I dunno.

And FYI, for amount of stuff happening at once in a map you’ll be hard pressed to find a game that keeps the action higher. I literally have to stop playing every few rounds because my heart just can’t take it some times. Remember, you can get out of your Titan and let it roam on AI mode – meaning there can be 12 Pilots wallrunning around, 12 Titans stomping below, and dozens of AI doing their thing.

Oh, and I keep seeing people thinking we’ve got “bots” when we talk about AI. Thats not how they are. The AI in Titanfall are not replacements for human players. Our playercount is not 6v6 because of AI – AI play their own role in the game and are a different class of character in the game.

Can’t wait! Only a couple months until speculative threads like this are gone and people are actually talking about their experiences with the game. Its truly fun stuff, and I hope everyone at least gives it a try.”

Responding to a recent confirmation of Titanfall‘s 6 vs. 6 maximum human player count, Respawn Entertainment studio head Vince Zampella has been busy on social media channels reaffirming the game’s fun factor, despite its smaller player capacity. Earlier, Zampella confirmed in a Twitter response that Titanfall would support only up to 12 players, including AI. 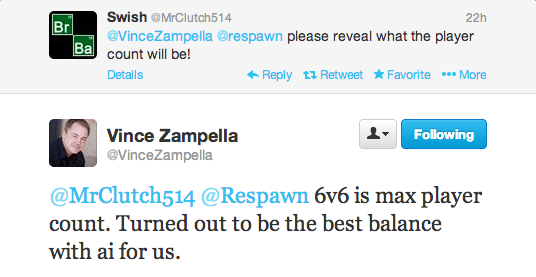 While this was the case in previously shown demos of the title, many learning about it for the first time showed negative reactions to the news. 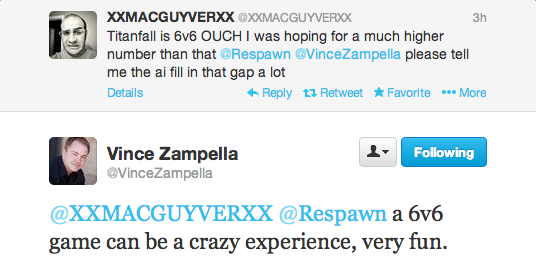 He went on to explain that the number wasn’t decided upon arbitrarily, but resulted in best the experience for the title. 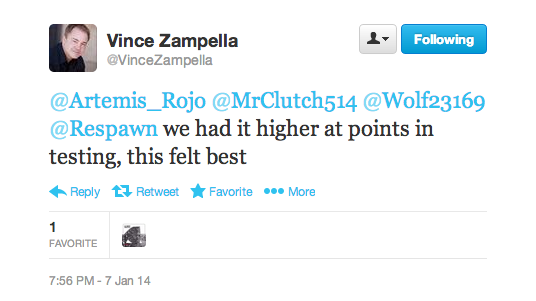 He also reminds fans that on top of real players and AI, there are also the Titans to consider. 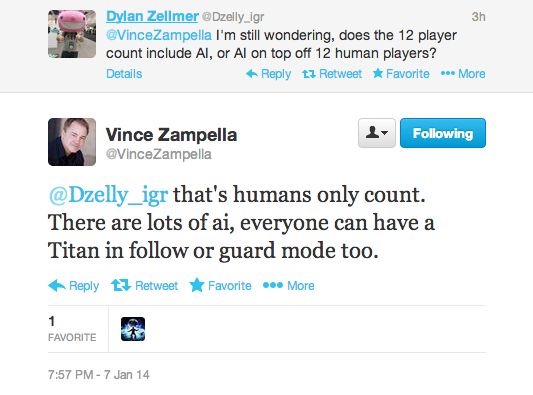 He even went as far as recommending other titles if a higher player count was your preference. 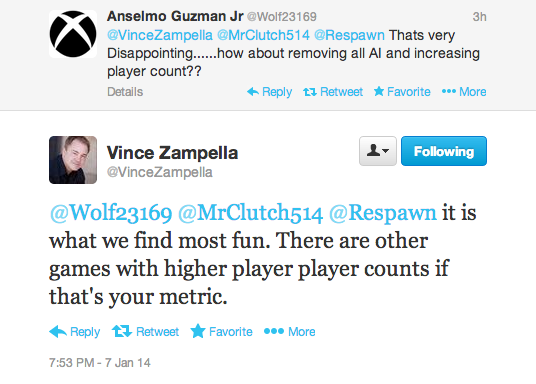 Titanfall drops March 11, 2014 on PC, Xbox One, and Xbox 360. We recently learned the title would support “Tactical” and “Bumper Jumper” controller schemes, as well as others.

What are your thoughts on Titanfall’s 6 vs. 6 player count? Is it big enough, even after considering additional AI infantry and Titans? Let us know in the comments!