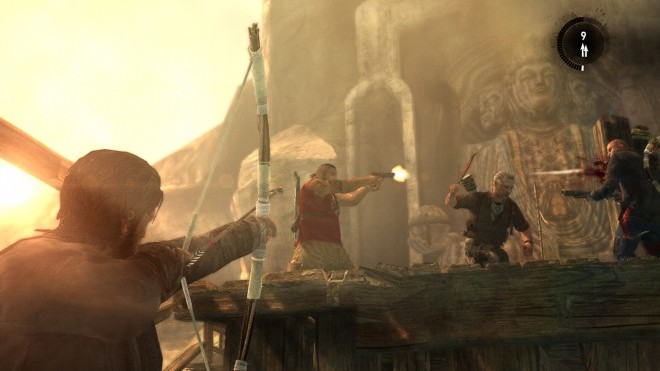 More details about the anticipated multiplayer portion of the upcoming Tomb Raider reboot have surfaced, providing a better look at some of the characters, game modes, and traps that will appear in Eidos Montreal’s take on Tomb Raider multiplayer.

Themes like survival, traversal, verticality and environmental threats that are heavily featured in the single player will play a large role in the multiplayer as well, according to SquarePortal. Studio Head Darrell Gallagher writes, “the multiplayer has to fit and it has to be fun. We’ve worked hard to make multiplayer fit seamlessly with the single player game and its key themes and we’ve play-tested the hell out of the multi-player game, it’s working well and gamers are enjoying it.” In this particular setting, groups of survivors are pitted against scavengers, vicious natives of the island, also known as the Solarii.

As mentioned in previous reports, only two game modes have been revealed so far. As detailed on the SquarePortal, they are:

Set Up: Survivors have newly been stranded and the Solarii are intent on destroying them. This is a team mode supporting 2 teams of up to 4 players each.

The winning conditions: The first team to get 25 kills, or be ahead in kills when time expires, wins the round.

When it comes to map traversal, the Solarrii have a slight advantage with the use of the “Ascender.” They can use it to quickly traverse the map and catch up to the survivors.

In each level, there are numerous traps that players can interact with. Some of these include the spike trap, the snare trap, the rockfall trap and the lightning rod. The spike trap will instantly kill any player who doesn’t mind their surroundings and stumbles upon one of these after being set up by the enemy. The snare trap hangs the victim upside down. However, he or she will have access to his or her pistol in order to make an escape attempt. As for the rockfall trap, any player tripping this wire will be in for one massive headache, killing them instantly. The deadly lightning rod can be set up in certain areas that will cause lighting to strike any enemy that should enter within its range, killing them instantly as well.

There are also a number of other items that players can interact with like the shotgun barrier and the turret. Shotgun barriers block off certain areas of a map that can only be accessed by blasting away at it with a shot gun. Player can tap the corresponding button to enter emplaced turrets in a number of levels. Each turret has infinite ammo, but can overheat and requires some time to cool down.

It looks like enemies aren’t the only thing you’ll need to consider when playing Tomb Raider multiplayer this March on the Xbox 360, PS3, or PC. Do you think the added elements of interactivity, traversal, and traps will enhance the multiplayer?

God of War: Ascension Beta Open For Everyone With Special Code, Ends This Monday