If you’ve been playing Call of Duty: Modern Warfare multiplayer, and if iyou’re active on social media (Twitter) or on the game’s subreddit, you most likely have heard about the Modern Warfare SBMM complaints. SBMM, for those unaware, stands for Skill Based Matchmaking, which means the game matches you against people with similar skill levels rather than basing it on ping and connection.

Well, it seems Modern Warfare SBMM hasn’t escaped the eyes of other Call of Duty developers too. Over on Twitter, Treyarch Design Director David Vonderhaar tweeted about it and even tagged Infinity Ward Co-Design Director of Multiplayer Joe Cecot and Senior Communications Manager Ashton Williams. While the tweets have since been deleted, Reddit user joshuajbrunner managed to screengrab all of ’em, which you can check out below. 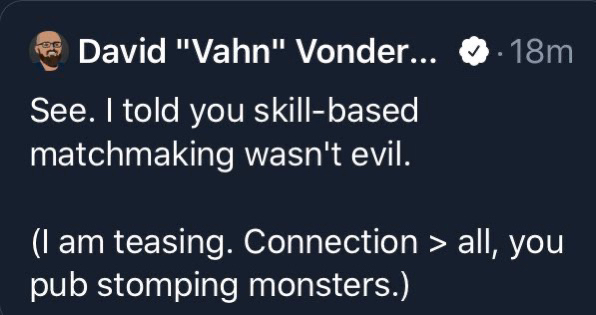 Now, there are two sides to this: one side is that Vonderhaar made a joke and people ran with it while the other part, is that he voiced out what he’s thinking and forgot that people WILL take it, and run with it. Or maybe he’s really just joking? Whatever the case is, SBMM is something Infinity Ward has NOT commented on since launch, and no one knows (except the devs) whether this is something that will be changed or not.

Have you felt the Modern Warfare SBMM effect and “sweaty” lobbies? Or are these just made up by people who always wants to pub stomp the opposing team? Let us know your thoughts in the commennts below.