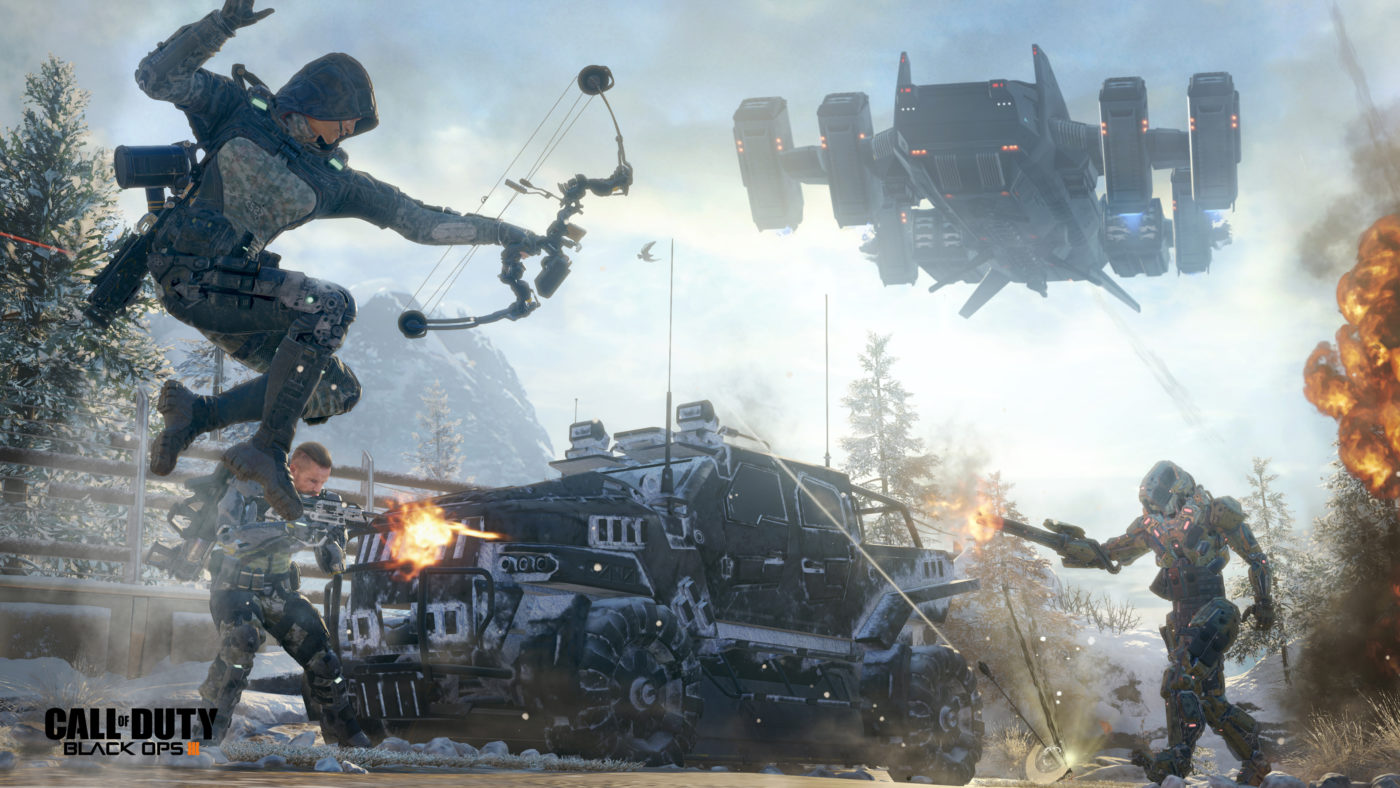 At Gamescom 2015, Call of Duty developer Treyarch took the opportunity to present the highest level of competitive Black Ops 3 multiplayer while showcasing some of the brand new eSports features and improvements the studio is implementing in this year’s shooter.

To help Treyarch out, professional Call of Duty players TeePee, Flexz, Merk, Tommey, Kivi, Gotaga, Censor, Buzzo fought in a series of public exhibition matches across a variety of maps and game modes, including Hardpoint, Search & Destroy, and Uplink. But before matches kicked off, Treyarch Game Design Director David Vonderhaar explained a few of the new systems being introduced to Black Ops 3’s competitive Arena mode (which replaces Black Ops 2’s League Play) that the studio hopes will push the game’s eSports agenda even further.

First, he expressed the studio’s wish to create a competitive experience that closely mirrors public matches and one that will inspire everyone to participate.

By introducing the Bans and Protects system, instead of the studio or other organizations deciding what game content is banned from competitive play, players will now have the ability to select content they want to ban and protect before any Arena match. For the purposes of this presentation, all content was customizable, meaning players could elect to ban or protect anything.

Black Ops 3’s Specialist system is made up of selectable abilities or weapons that sit somewhere in between Create-a-Class Loadouts and Scorestreaks in terms of power. In Arena matches, the Specialist Draft feature ensure players will only be able to select one Specialist Weapon or Ability per team per game in order to avoid duplicate set-ups.

Player Ranking is based on number of wins. There are 20 ranks in total with a Masters Division beyond that. At every five ranks, more wins will be required in order to progress. Players will need to lose two games to be demoted, but no one can be demoted below their Skill Tier, which will help cut down on rank boosting.

CoDCaster has been improved and revamped in favor of ease-of-use and simplicity in an effort to make the viewing experience as enjoyable as the playing experience. A Quick Settings menu can be access at the press of a button where casters can easily edit settings they pre-determined and saved earlier. On screen, the Player Loadout Widget will allow casters to view details on each player and their loadout. The Team Identity feature will also let casters change team logos and colors easily, a feature that is traditionally restricted to production teams at eSports events.

The in-game Black Ops 3 Live Event Viewer will bring the highest level of play in view of everyone at the press of a button, so anyone can view any eSports event directly from their own console. Vonderhaar says it’s just the beginning of the studio’s huge plan to grow Call of Duty eSports.

To close off the presentation, Treyarch dubbed PlayStation as the new ‘home for Call of Duty eSports,’ suggesting that all competitive play from this point on will move from Xbox to PlayStation. No announcement was made regarding a Call of Duty Championship 2016, but the studio says more information on Leagues and other eSports news is to come.

We’ll leave you with a replay of all three matches from the live stream event.

Call of Duty: Black Ops 3 launches on November 6. The multiplayer beta kicks off later this month on August 19 for PlayStation 4 users and August 26 for Xbox One and PC users.