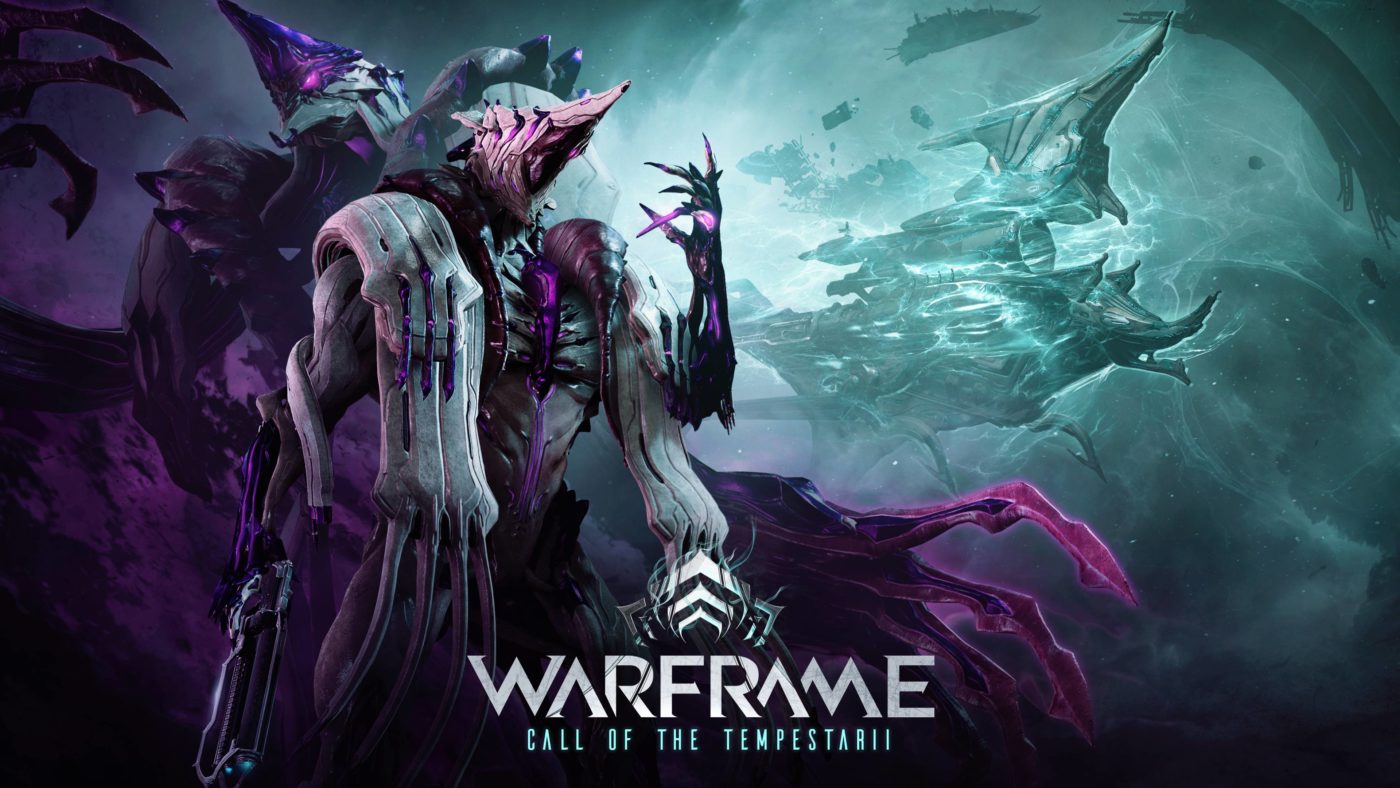 Digital Extremes has released the next major update to Warframe, as Warframe update 2.03 is now live! This is called patch 30.9.0 by the studio and is also known as the Prime Resurgence update.

What is Aya and Regal Aya?

These are the currencies that are used to purchase items from Varzia!

Aya is an earned currency that is your free path to gaining Prime items through the in-game Relic system. It is a resource that is exchanged for Void Relics and other non-premium items available in Varzia’s wares. Aya is found in Missions (The Void or Bounties) or has a chance of appearing in Relic Packs available for purchase in the Market for Platinum or Syndicate Offerings for Standing.

Regal Aya is a premium currency (similar to Platinum, but not tradeable) that gives you instant access to Prime Warframes, Weapons, Accessories, and Bundles available in Varzia’s wares. It can be purchased in the Market or online storefronts.

We have an extremely thorough Dev Workshop / FAQ explaining how this Event came to be, including the introduction of Regal Aya. Simply put, The Prime Vault program has undergone many changes over the years, all driven by player feedback and requests.

The theme over these changes has been to offer more choice and quicker access to Vaulted Prime rotations. Which is where Prime Resurgence comes in. Please read our Dev Workshop for more information, otherwise enjoy the largest Prime Vault opening of all-time, with a significantly streamlined process for Devs and Players alike!

Added a new UI notification when inside the Orbiter that is a persistent reminder for Quests, to help guide new Tenno to their next steps. A lot of new players have felt lost once they finish Vor’s Prize, and this persistent reminder will show them what to do next! This can be disabled at any time in the menus under Options > Interface > Show Tenno Guide!

We are changing the crafting requirement for the Heat Sword to require a Neurode rather than a Neural Sensor. Originally, this was meant to incentivize players to explore new nodes, but we want to get better gear in players hands earlier! This change is smaller than most, but meaningful to new players looking to upgrade their melee early on.

In March 2021, we made Railjack more accessible by reducing the crafting resources and the time it took to build your Railjack. Now, we will be reducing the crafting times again from 1 hour to 1 minute per part. As Railjack becomes a larger part of the game, we hope this change will allow new players to swiftly complete Rising Tide, and prepare their Railjack for future fights!

This change is two fold: reduced crafting costs for Amp parts, and reduced Standing cost for purchasing parts. Our goal here is to make constructing an Amp more accessible to players by reducing resource demands. This is rooted firmly in the role upgrading your Amp plays in performing well in main quests like The Sacrifice as well as engaging in Focus Tree related content. Here are the changes below:

Any crafting component not noted is keeping its current cost.
Reduced Costs for Refined Ore/Gem Blueprints in the Plains of Eidolon

To accompany our changes to Amp crafting, the Standing costs of Blueprints for refined Ores and Gems from the Plains of Eidolon have been adjusted. Here are the new costs:

In addition to the already noted changes to Amps and Ore/Gems, we’ve included an increase to Sentient Core Standing return and also modified the Exceptional Sentient Core Conversion Blueprint. Those starting out on their Quills journey should find this allows them to progress through the Syndicate faster to reach the higher tier Offerings.

Players who had an Exceptional Sentient Core Conversion Blueprint crafting will get a one-time gift of 10 Exceptional Cores in exchange for only spending 2 Intact Cores. Bank error in your favor!

Necramechs have started to play a vital role within the System – from being part of the Railjack experience, to a great tool in our Open Worlds. While their firepower provides an advantage, the time and resource investment required to obtain one has shown to be a deterrent to newer players. As The New War approaches, we aim to alleviate that initial friction and provide an easier path of obtainment.

Enemy Necramechs now have a 50% chance to drop a Necramech part across the board, evenly distributed. The battle required to defeat an enemy Necramech is not easy nor quick. This increased chance of getting a Necramech part helps to reduce the time investment  needed in order to gather the mandatory parts to build your first Necramech.

Additionally, we’ve halved most of the Mining/Fishing part costs for crafting the Voidrig as this is the ‘first’ Necramech players see in the Heart of Deimos quest, so we want to make acquiring it a little easier. Bonewidow has been left as is as a longer-term goal.

Voidrig Engine
Tempered Bapholite: From 100 to 50
Biotic Filter: From 2 to 1

Howl of The Kubrow Quest Changes

We have shortened the Survival mission within the Quest from 10 minutes to 5 minutes. We have more Howl of the Kubrow changes coming for Console at a later date – they missed this Update window!

Trinity – Champion’s Blessing (Blessing Augment)
Gain Primary and Secondary Critical Chance for 12s for each percent you heal on allies up to 350%.

*Purchase from the New Loka or Perrin Sequence for Syndicate Standing!

*Purchase from the Red Veil or New Loka for Syndicate Standing!

Xaku – Vampiric Grasp (Grasp Of Lohk Augment)
When a stolen weapon deals damage to an enemy affected by The Lost: Gaze or The Vast Untime, Xaku heals by 25.

*Purchase from the Steel Meridian or Cephalon Suda for Syndicate Standing!

Xaku – The Relentless Lost (The Lost Augment)
Casting The Lost increases Ability Strength for The Lost by 35%. The bonus can stack up to 3x and resets if you can cast the same ability twice.

When we first introduced Forma years ago, Warframe was a much smaller game. We had fewer weapons, fewer Warframes, and way fewer Mods. As players continue their Forma journey, there’s often discussions on doing a Quality of Life (QOL) pass to the way things work with our favourite Golden Puzzle Piece.

We want your Mastery Rank to be considered when using Forma to establish a baseline power level for your playable characters!

What does that mean?

If a Mastery Rank 30 player uses a Forma, they won’t have to re-unlock any Abilities (or their Ranks) on a given item! Yes, they’ll still need to level the gear itself to apply another Forma but, depending on your Mastery Rank, you can have access to more (or all) Abilities on your unranked gear! This achieves our goal of keeping Forma essential to build customization, but allowing players with higher Mastery Ranks a more convenient experience.

Right now, using a Forma on a Warframe (or Archwing/Necramech) requires you to start from 0 when it comes to Abilities you can use. Furthermore, you only get the first Rank of your First ability. Take Valkyr for instance. You install a Forma, and you’re back to only casting unranked Rip Line!

Our change will make it so your Mastery Rank impacts how much you have unlocked by default on Forma use. Following our Valkyr example, with this change, a Mastery Rank 10 player would have all of her abilities unlocked upon applying a Forma to her, albeit not at their full strength!

This ranking process is something players already experience in game – you know by the time you’ve levelled your Valkyr on Hydron to 10, you unlock Hysteria. We are making your Mastery Rank ‘match’ those milestones, so to speak, with the end goal being a Mastery Rank 30 player can use Forma without ever having to be locked out of Abilities. Simply put, the higher your Mastery Rank, the higher the baseline of your gear when using Forma.

*New additions since the Dev Workshop:
Post Dev Workshop feedback and continued conversations have added on another related change to reaching Mastery Rank 30+:

Sorties and Arbitrations now allow Mastery Rank 30+ players that have put at least 1 Forma into their Warframe to bypass the “Rank 30 Warframe” requirement.

Mind Control
The thinking behind these changes are fueled by the amount of investment towards this single Target, and having that pay off more in your favor.

Psychic Bolts
While this change is minor and provides more of a visual cue, the goal here was to provide a better presentation / feedback when Psychic Bolts connect with a Target.

FULL UI RESKINS AND FIXES:
We’ve got a handful of reskinned UI screens for your viewing pleasure! Some of these are already live from previous Hotfixes, but we’ve listed them here for full exposure.

Warframe Decoration tools are all about customization. We value that quality. The learning curve for new players, however, can be pretty steep. Tools like Surface Snapping and Rotation Axis are ideal for ambitious decorators with particular visions for their Orbiters and Dojos, but they can overwhelm Tenno new to decorating.

We aim to address that difference! The UI improvements and more discussed below include improvements for new and experienced decorators alike.

Advanced Mode houses all the customization-focused tools decorators already know and use expertly.

Some decoration controls on controllers were adopted from Archwing and Railjack. We’ve decoupled those functions to create controls specific to decorating!

Here are the biggest key binding changes for PlayStation:

We also refreshed the UI Design overall with this change. Enjoy the new look that improves readability with a Warframe flare!

All Decorations Are Now Scalable

In the past, only Dojo Decorations have been scalable. You can now scale Personal Decorations too! From Dojos to Orbiters, Tenno can customize decoration sizes.

You now control where Tenno spawn in your Dojo! Place an Arrival Gate and Tenno will appear in that very spot when they visit. Dojos without an Arrival Gate will default to the current spawn system.

If you’ve engaged in the Adversary hunts with Kuva Liches and Sisters of Parvos, your Foundry might be suffering from some unavoidable clutter. The amount of Hounds and weapons sitting in your Foundry have grown to not only take up room in your list but also within the database itself!

To alleviate this clutter, you can now Sell a Hound and/or Adversary weapon directly from your Foundry without having to claim the item and use a Slot, granting yourself some Credits! Get cleaning up your (H)Foundry. Ordis’ orders!