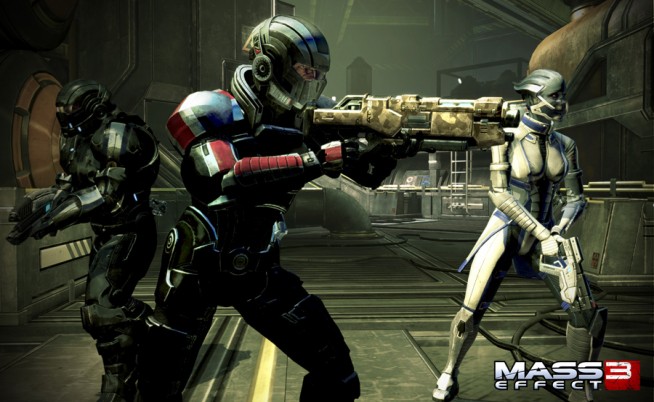 In an interview with Game Informer, Casey Hudson spoke of why he feels the release of Mass Effect 3 is a good time to introduce multiplayer to the franchise. As many already know, the first two Mass Effect entries were primarily focussed on the story of Commander Shepard and his team as they discovered the secrets of a menacing, ancient race of machines bent on devouring the Galaxy known as the Reapers. The difference in BioWare’s upcoming title is that the story now shifts focus to the battle between these evil dudes and the entire Galaxy. “That’s what’s different with Mass Effect 3. It’s now an open war across the galaxy. We try to show that to give you the scale of the war.” Hudson added, “It’s also the thing that finally made sense with why we’d have multiplayer and why it’s interesting to be someone else other than Shepard.” BioWare will now be giving players a chance to step into the shoes a different character (as well as different races). “On the multiplayer side, you get to be one of those special ops that’s constantly fighting to hold these locations around the galaxy. The more you do that, the easier it’s going to be for Shepard. The less of that you do, the less help you’re getting essentially.”

It’s widely known by now that the multiplayer will have some effect on the single-player. However, Hudson promised that those wishing to forgo the MP can still get the full experience out of the SP. (But we know all you amazing MP1st readers are here for some amazing Sci-Fi MP action!) Hudson explained that “some people will want to get to the end as fast as possible, but they’ll play multiplayer whenever, indefinitely. That’s one way to play it – to play the single-player story, go straight to the end, and not do any of the character stuff or side plots, but you play a little multiplayer now and then. Alternately, if you’re really focused on the single-player, you can do a more completionist playthrough and end up with the same results.”

In terms of downloadable content for multiplayer, Hudson mentioned that “there’s some multiplayer stuff, but we’re also planning some DLC on the single-player side, because it did really good in Mass Effect 2.”

If you haven’t yet, check out Mass Effect 3 Multiplayer: “N”7 Things We Want

Are you going to be giving Mass Effect 3’s multiplayer a spin on day one?