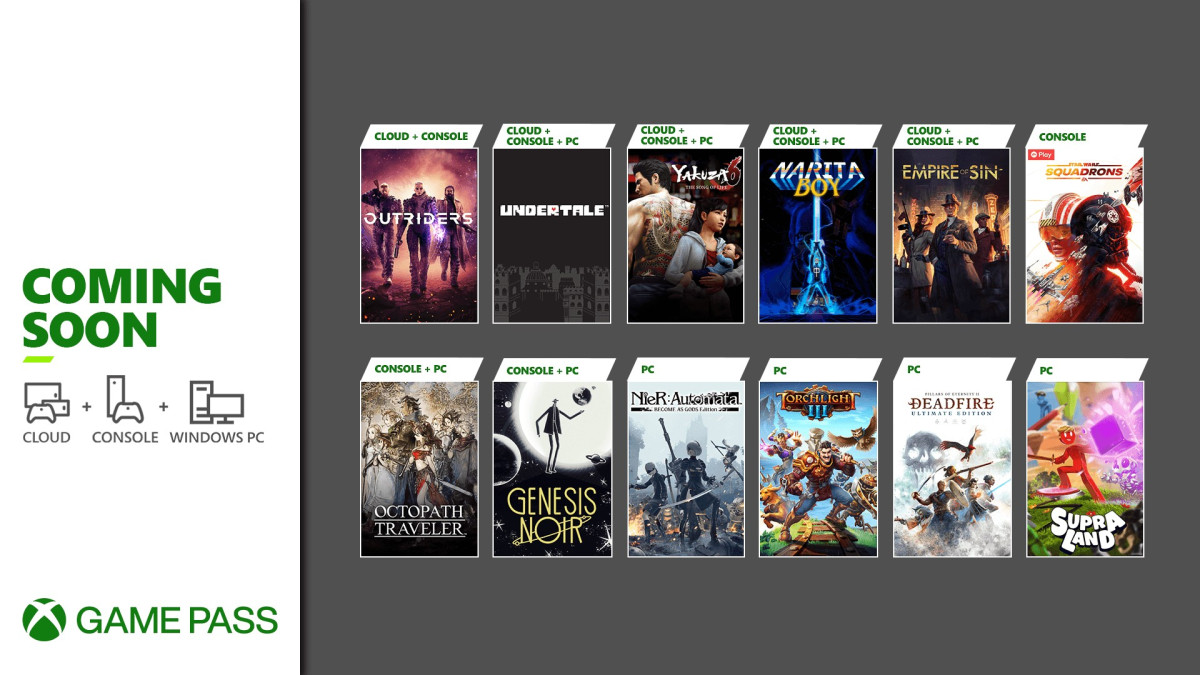 If you’re an Xbox user and have an existing Game Pass subscription, then there’s going to be a great reason to go and play games this March, as Microsoft has announced that Xbox Game Pass upcoming games list will be getting Yakuza 6: The Song of Life, Undertale, Octopath Traveler, and a whole lot more.

Here’s the list of the games, DLC, and more that are coming out this month of March as detailed by Xbox..

Undertale (Cloud, Console, and PC) ID@Xbox – Available today
Fall into the underworld and explore a hilarious and heartwarming world full of dangerous monsters. Date a skeleton, dance with a robot, cook with a fishwoman… or destroy everyone where they stand. The future is yours to determine in this critically acclaimed role-playing game from indie developer Toby Fox.

Empire of Sin (Cloud, Console, and PC) ID@Xbox – March 18
Empire of Sin is a strategy game based in the 1920s Prohibition-era Chicago underworld. Step into the wing-tipped shoes of real and fictional gangsters like Al Capone or Stephanie St. Clair to build and manage your criminal empire. Schmooze, swindle, and strategize your way to the top.

Nier: Automata (PC) – March 18
Humanity has been driven from the Earth by mechanical beings from another world. In a final effort to take back the planet, the human resistance sends a force of android soldiers to destroy the invaders. Now, a war between machines and androids rages on… a war that could soon unveil a long-forgotten truth of the world.

Star Wars: Squadrons (Console) EA Play – March 18
The New Republic fights for freedom. The Empire demands order. The Galactic Civil War is at a tipping point in a time where ace pilots on both sides could make all the difference. Master the art of starfighter combat in Star Wars: Squadrons, coming soon to EA Play and Xbox Game Pass Ultimate.

Torchlight III (PC) – March 18
In Torchlight III, Novastraia is again under threat of invasion and it’s up to you to defend against the Netherim and its allies. Gather your wits and brave the frontier to find fame, glory, and a new adventure!

Genesis Noir (Console and PC) ID@Xbox – March 25
A noir adventure spanning time and space. When a love triangle between cosmic beings becomes a bitter confrontation, you’ll witness a gunshot fired by a jealous god—otherwise known as The Big Bang. Jump into the expanding universe and search for a way to destroy creation and save your love.

Octopath Traveler (Console and PC) – March 25
Eight travelers. Eight adventures. Eight roles to play. Embark on an epic journey across the vast and wondrous world of Orsterra and discover the captivating stories of each of the eight travelers. Use each character’s distinctive abilities in and out of battle and make decisions to shape your path.

Yakuza 6: The Song of Life (Cloud, Console and PC) – March 25
Kazuma Kiryu, the Dragon of Dojima, returns with the dream of living a quiet life. But soon he discovers Haruka has been in an accident and is now in a coma, leaving her young son, Haruto, without care. To protect this child, Kiryu takes Haruto to the last place Haruka was spotted, Onomichi, Hiroshima. Why are the Tojo Clan and Yomei Alliance both after Haruto? Kiryu will have to navigate through the criminal underworld he left behind and fight for the answers to keep the family he loves safe.

Narita Boy (Cloud, Console and PC) ID@Xbox – March 30
Become symphonic in Narita Boy! A radical action-adventure as a legendary pixel hero trapped as a mere echo within the Digital Kingdom. Discover the mysteries behind the Techno-sword, lock swords with the corrupt and tainted Stallions. Save the world!

Outriders (Cloud and Console) – April 1
Outriders brings intense action and deep role-playing to Xbox Game Pass! Developed by People Can Fly, veterans of the shooter genre, Outriders presents a journey of survival across a savage planet, which can be tackled in both single player and 1-3 player co-op.

Sea of Thieves Third Anniversary Event – March 18 to March 21
March 20 marks the third anniversary for Sea of Thieves. To celebrate, Xbox Game Pass members who play between March 18 and March 21 will receive the Jump For Joy emote for free!

The Outer Worlds: Murder on Eridanos DLC – March 17
Xbox Game Pass members save 10%! It’s the final narrative expansion to the award-winning RPG from Obsidian Entertainment and Private Division. The famous Halcyon Helen has been murdered, and everyone is a suspect. There’s more than meets the eye in the colony’s grandest murder mystery.

Apex Legends is here! This is the start of an exciting new monthly Perk drop in the form of Weapon Charms. Each month we’ll have a Weapon Charm featuring a different theme ready for you. March brings the Mass Effect N7 Weapon Charm. Claim yours now!

We have other great Perks coming this month, but in the meantime go claim these by going to the Perks gallery before they’re gone!

Spring is coming! Time to mow over your competition and get 4X points for Ultimate Quests! Don’t forget to claim your Rewards points after you complete your Quests.

The following games are leaving the Xbox Game Pass library soon, so be sure to dive back in to give a proper farewell! As always, you can use your member discount to save up to 20% on games before they leave to keep the fun going.

In other related Microsoft news, the publisher has given five Bethesda games the FPS boost treatment.

Dungeons & Dragons Dark Alliance Announced & Out This June, Here’s a Look at Gameplay

Genshin Impact Update 1.40 Out for Invitation of Windblume