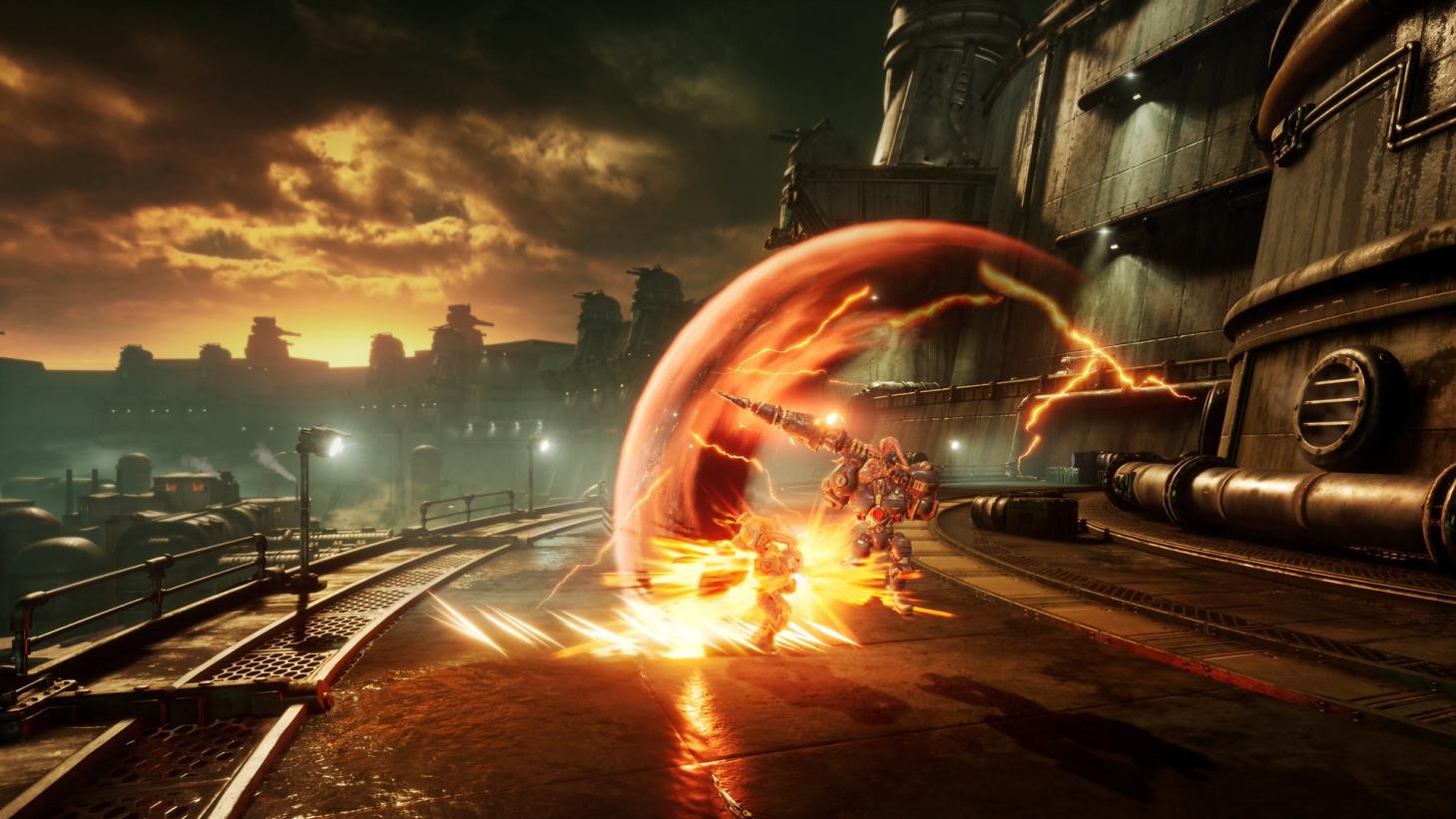 Ti Games makes their debut splash with F.I.S.T. (Forged In Shadow Torch), an exciting new Metroidvania title that packs quite a heavy punch. Read on for our full F.I.S.T. review to see how this hare fares.

With a six-year old war finally over, the city known as Torch City now finds itself under the ruling of the vicious and corrupt Rat Gang, along with a large robotic military group known as the Legion. There is little hope left for the resistance fighters, as they’re slowly rounded up, and brought to a high security prison just on the outskirts of Torch City.

After learning that some of his fellow friends in the resistance have been captured, war hero and ex-resistance member, Rayton the Rabbit, finally decides that it’s time to come out of the shadows and once again dawn his giant robotic fist. However, he may soon come to regret his return as a haunting past begins to resurface in this drama-filled tale of war.

It’s not uncommon for a lot of Metroidvania style games to be light on it’s story, but in the case of F.I.S.T. it seems that the studio has put some heavy focus, as the game is filled with well animated cutscenes, along with some lengthy dialogue. Now, it’s not the most interesting story, but it is one that I thoroughly enjoyed, especially with all the unique NPCs and environments scattered around to tell it.

For me, I was instantly drawn to the scope of the world, as it’s filled with rich details, clearly inspired by a combination of Dieselpunk, and much of Chinese culture. It looks beautiful, and every part of the game felt like it had a story to tell just from the visuals alone. Torch City itself is filled with a ton of variety, from slummed housing, lively districts, to even rich and elegant suits, there’s plenty to be found in Torch City, and even more outside of it. 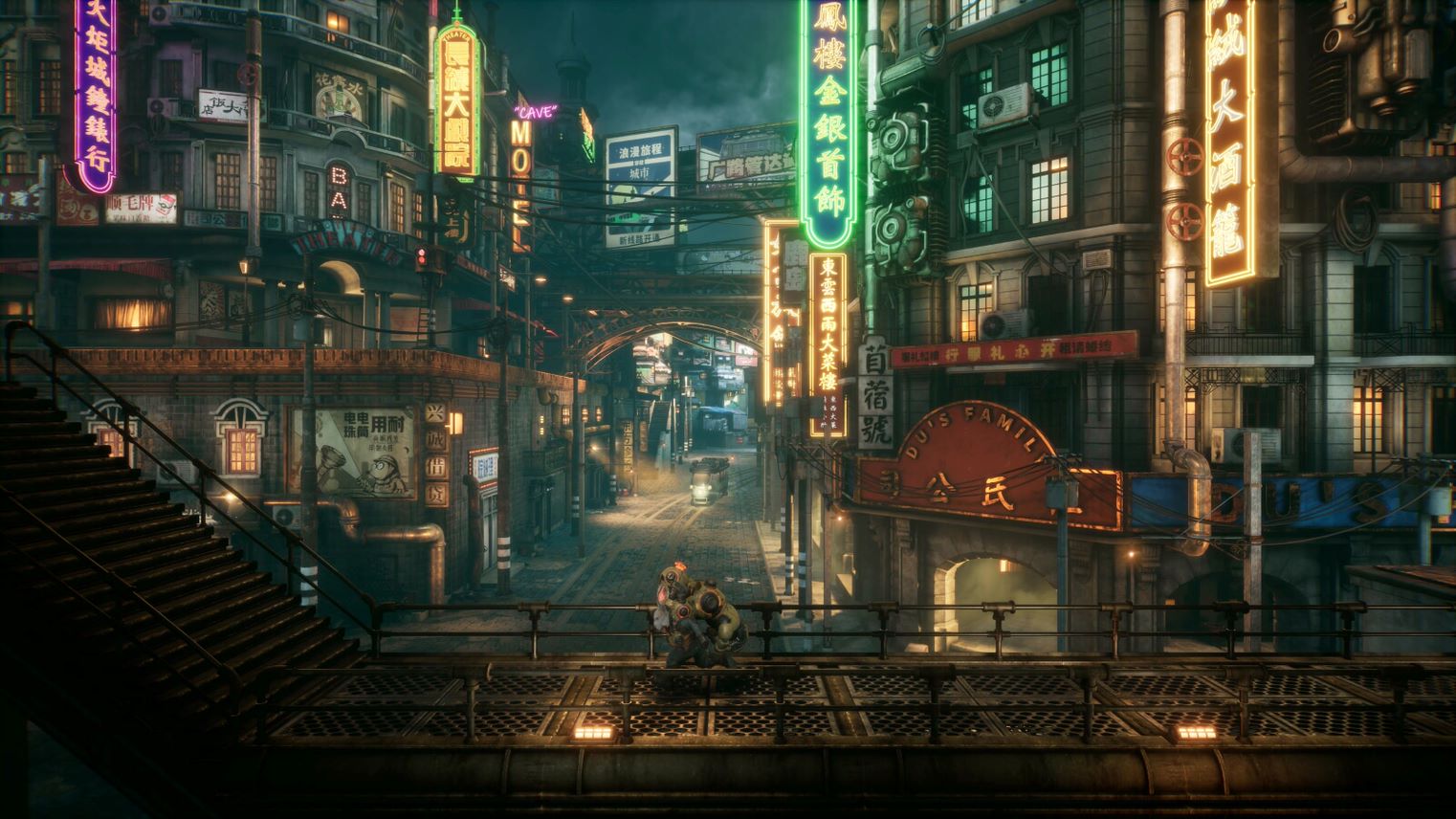 Looking at that photo, I think we can all agree F.I.S.T. has a Final Fantasy 7 vibe to it, which is felt throughout the entire game. It’s such a unique art style that not many games can capture it so perfectly like F.I.S.T. has. Truly a wonderfully crafted world oozing in beauty and life.

As for the NPCs, outside of your main companions who’s a bear and a cat, the entire world is littered with unique and interesting characters that all felt relatable. Going from zone to zone I was kept excited by all the fresh faces, and their fun, and sometimes humorous dialogue.

Speaking of, the game features support for both English and Chinese dub. I went with the English dub for my first playthrough, and I was surprisingly surprised by how well performed the cast was. Now this isn’t the biggest game to show off a voice actor’s talent, but I did think it was a solid performance, more than what I was expecting. Nothing phoned, you can clearly tell that the voice actors were giving their all and having fun doing it. Rayton’s voice instantly feels like one of those iconic voices you just can’t get enough of. There’s a charm to all the characters that we can’t help but smile at.

Ruled by an Iron Fist

My biggest conflict with F.I.S.T would undoubtedly be its own combat. I like it, but I also don’t, and there’s some very good reasons for that.

At some point in the game you will eventually unlock all three weapons, and with it, a plethora of different skills and combos that can be chained into one another. It’s rather quite fun and satisfying, however it’s actually the execution part that can be frustrating. It’s slow…painfully slow, which seems to be the opposite of what F.I.S.T. wants to be presented as. 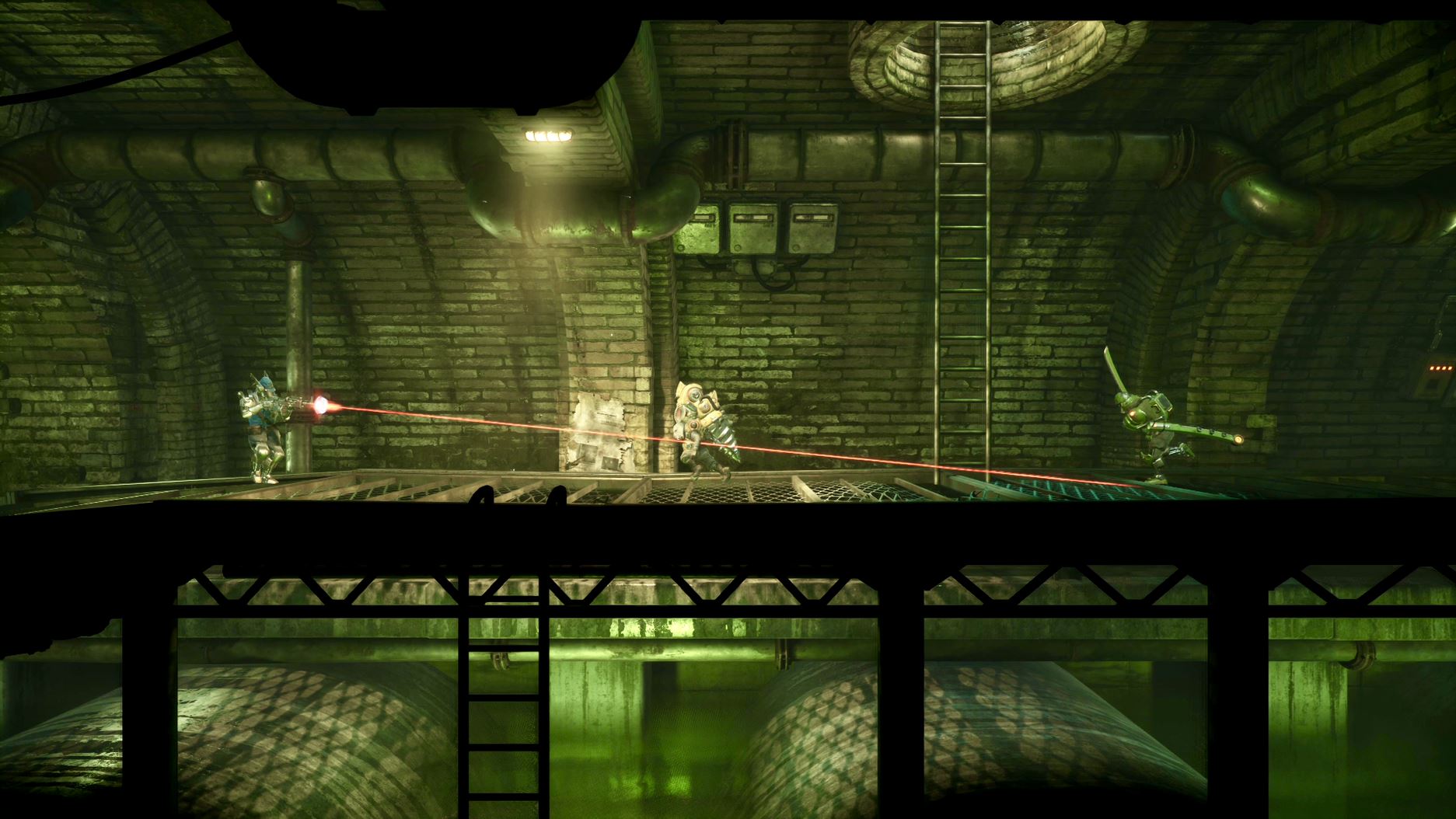 Going through stages, you’ll encounter all kinds of enemies. Some shoot, some wield swords, and others who are straight up ninjas and move at you at lightning speeds. Whatever the type of enemy they may be, there never really feels like a time where you will actually utilize the full combo sets offered. Enemies just move too quickly, and it takes far too long to get them in a stunned state.

It’s likely on the third strike of whatever combo you’re doing that the enemy would be on the move, if not already about to hit you. This is especially true with a majority of the bosses,  as they’re big beefy tanks with amped up difficulty that you can usually only get one to three strikes in before they attack. Because of this, fights often feel dragged out due to the punishment you get for trying to play this as a fast paced hack and slash, contrary to what cutscenes and such lead you to believe.

The parry system wasn’t much better either as it required you to flick your direction opposite to an attack. It’s fine during one on one encounters, but dealing with a bunch of mechanical samurais and ninjas was next to impossible to use outside of random occurrences.

There is a dodge, but for the majority of the game you’ll be using it to gain distance rather than trying to avoid attacks since enemies can hit you out of it. That is up until almost the end, when you do unlock the invincible dash that fixes that problem. Cool, but that’s about 8-10 plus hours in, and near the end.

I think attacks could have caused more stun effects to enemies, because truthfully combos are really fun to perform. Heck, the game even has some training courses that dive deep into these combos, I’m just saddened by the fact that despite learning them, I could never really hit the advanced ones in real combat. Kind of like the Devil May Cry combo system, except here enemies are impervious to your attacks with interruptions during every combo. You’ll more than likely stick to the standard move-sets and special attacks that do just as much damage and are easier to perform.

I also feel that the issue bled a bit into the gadgets as you can use missiles, explosive dummies, an electric baton, and a healing flask. These all operate on their own separate gauge from health and SP known as EP. Problem here is that you’ll likely reserve the EP gauge for health regens since it’s all shared resources. While the other gadgets dealt high damage, it just wasn’t worth the cost of losing potential health, especially with how big the stages are, and how many enemies you are going to face.

I’m not one to say how a game should have been designed, but in this case, I do feel it would have been beneficial if each gadget had their own separate usage. It certainly would have made me want to use them a lot more rather than be super conservative for the sake of heals.

Still, I wouldn’t have beaten F.I.S.T. and try to go for the Platinum trophy if I wasn’t enjoying it, and despite the above issues I found the combat to be fun and engaging. The weapons are just so unique in their abilities, and just seeing a bad guy thrown across a room from one charged-up punch felt ever so satisfying. The electric whip was my favorite weapon despite it feeling weak. I just loved seeing all the awesome effects and the way enemies reacted to it during combat. 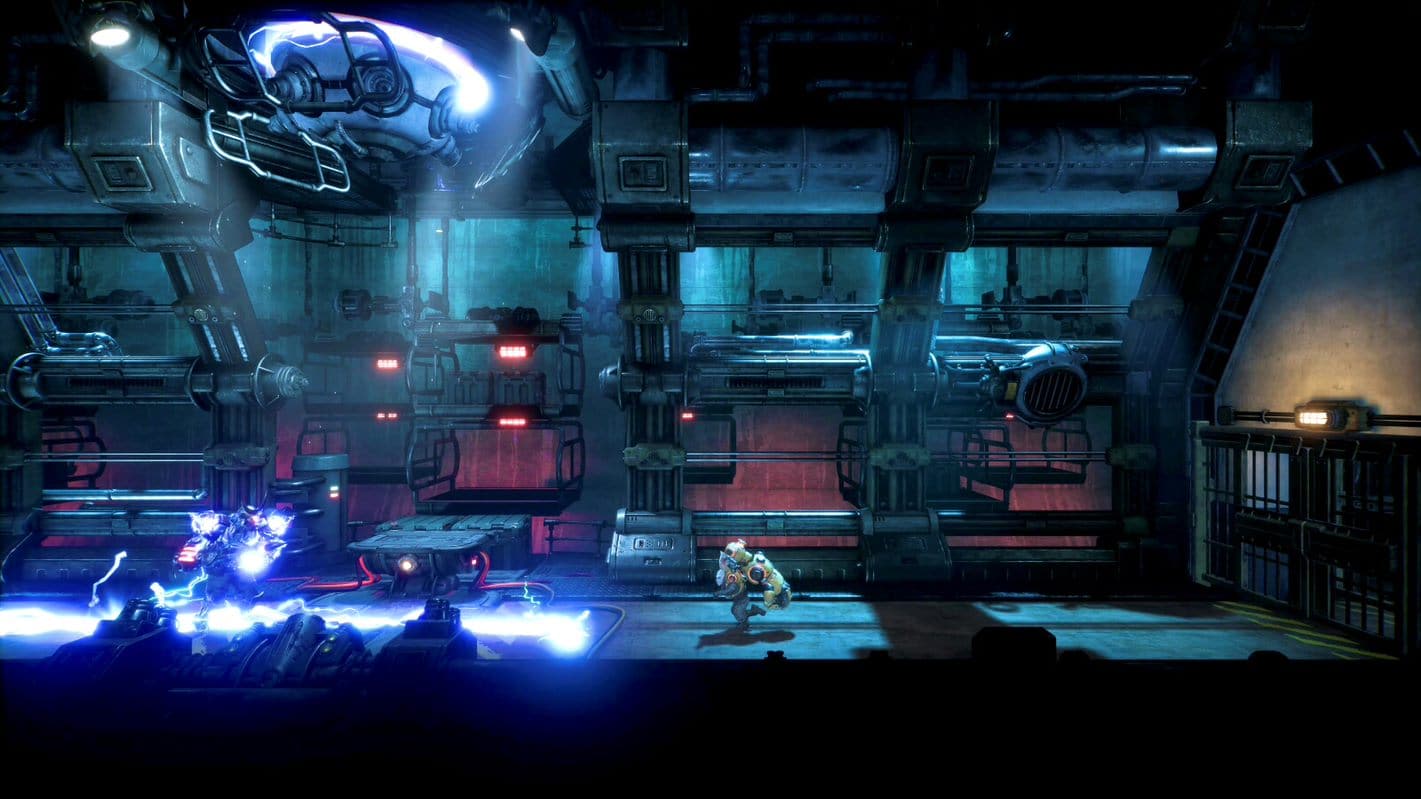 Further, F.I.S.T. really shines most in its exploration. Levels are massive, filled with tons of collectibles and secrets. For every new ability we unlocked, F.I.S.T. ensured that they would be used to their full capacity while exploring. Take the drill, outside of being a badass weapon that deals massive damage, players can use it as a propeller to glide down from high heights. Additionally, it can be used while swimming underwater so that you can move faster.

The electric whip, and fist have a few of those gameplay options as well. I really liked that they’re weapons, but they’re also useful tools that can help you get around stages. That’s really important because the stages in F.I.S.T. are filled with various platforming and puzzles. Some are super frustrating, but that comes with the territory of a Medroidvania style game. I enjoyed the exploration in F.I.S.T. and how nicely connected every stage felt to one another. No moment feeling dull or boring, and here were always new challenges awaiting us in each newly explored area. While I have beaten F.I.S.T. I still have plenty left to want to go back to.

F.I.S.T. Forged In Shadow Torch rethreads a lot of familiarity of the Metroidvania genre, but it does so gracefully that fans of the genre will no doubt come to love its offering. Its challenging, fun-filled combat will undoubtedly serve as a highlight, as with it’s engaging exploration, and charming story and characters. Ti Games debut title is one not to skip out on, and is rousing continuation to the PlayStation Heroes Project, proving that you don’t need to be a big studio to pull of high production values into a game

A review code for F.I.S.T. Forged In Shadow Torch was provided by the publisher and played on the PS5. You can read SP1st and MP1st’s review and scoring policy right here.